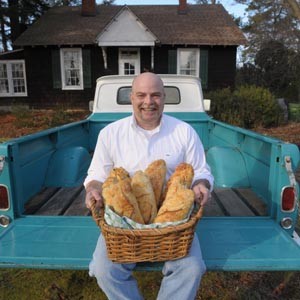 Watch out, cupcake pushers. You too, muffin hustlers. The city of Richmond may be trying to shut you down.

For three years, Mark McIntyre's baguettes and bacon brownies have been winning fans at local farmers' markets. But last week a state inspector told him Richmond law forbids food-based businesses from operating out of a home.

“I was flabbergasted,” McIntyre says.

He's run Norwood Cottage Bakery out of his North Side home for three years. When he founded the business, he went to City Hall to see if he needed a business license. Staff told him he didn't. The state told him that to comply with state code, all he had to do was write “not for resale” on his labels.

Then a state inspector sent a memo to McIntyre from Pam Miles, another official at the Virginia Department of Agriculture and Consumer Services. The memo instructed inspectors that “when you receive calls from individuals stating that they want to start a food processing operation in their home in the City of Richmond you need to let them know that the Richmond zoning office has informed our (VDACS) office that it is illegal for them to operate a food business in their homes in the city.”

The city code allows residents to run businesses from their homes but prohibits certain uses, such as catering. The VDACS memo says the zoning office doesn't differentiate between processors and caterers. The city will no longer issue business licenses to these home-based food makers, the memo says, unless they move their operations to a commercial kitchen and pay $220 for a caterer's license.

McIntyre says that's not a realistic option for him. His dough needs a carefully controlled environment, he says, and “financially, it's hard enough to make a living making bread.”

On Thursday, Feb. 10, McIntyre says “a SWAT team” of officials from the city, police and fire departments descended on his home bakery and asked to see his business license. “All I do is I bake bread, and I sell it at farmers' markets,” he explained. The city issued him a ticket, and told McIntyre to show up in court in March with his license in hand.

Since then, McIntyre has been calling various city departments to try to sort out the matter, but says he hasn't received any straight answers. One zoning official told McIntyre his home baking business was perfectly fine, he says. “No one seems to know what anyone else is doing,” McIntyre says.