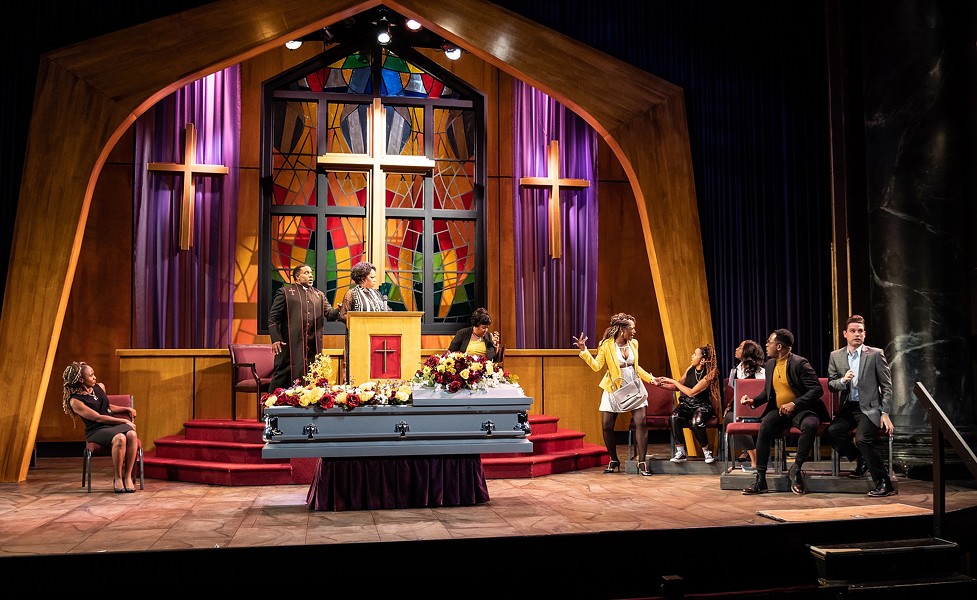 Aaron Sutten The cast of Virginia Rep's "Chicken and Biscuits," which runs through Oct. 30th on the November Theatre's Marjorie Arenstein stage.

Who knew a funeral could be so much fun?

Virginia Rep’s “Chicken and Biscuits,” a throwback to sitcom-style family comedies of the past, balances generous doses of humor with enough genuine family drama to keep audiences charmed and send them home satisfied.

The script by Douglas Lyons packs in some insightful gems among generally broad jokes. While the story unfolds a bit like a checklist of conflicts to resolve, deft direction by Demone Seraphin and a couple standout performances overcome some of its clunkier aspects.

“Biscuits” depicts the members of Reverend Bernard Jenkins’ extended family as they prepare, attend and recover from the good reverend’s funeral service. We first meet Bernard’s elder daughter, the pious Baneatta (Cynthia F. Carter), whose husband, Reginald (Dale Heiskill), will be delivering the eulogy. Baneatta’s righteousness contrasts sharply with the flamboyance of her little sister Beverly (C. Kelly Wright) and their clashes reverberate through other relationships, like cousins La’Trice (Tyandria Jaaber) and Simone (Shelby Marie Edwards).

Baneatta’s son Kenny (Brandon Alvion) brings his long-term boyfriend Logan (Jeffrey Allen Sneed) to the service, whose status as the sole white Jewish attendee at the Black church service is mined for some of the best jokes as well as the most heart-warming moments.

As the funeral service progresses, a picture of the dead reverend as a compelling and unifying figure emerges but the appearance of mysterious stranger, Brianna (Desiree Roots), ultimately leads to the revelation of a jarring family secret.

All of the characters live suspended in the tension between Baneatta and Beverly, who provide the energy that powers the play. Carter and Wright dig into that dynamic and totally deliver the goods. The former never fully obscures a big-hearted protectiveness behind her veneer of fierce religiosity while the latter pushes her cleavage-bearing, man-hungry mannerisms to the edge of caricature without going over. 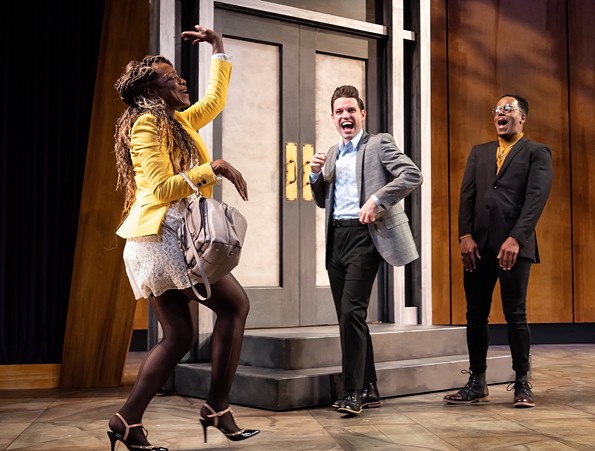 Sneed delivers a memorable performance by aggressively mining the rich vein of laughs Lyons provides Logan. And Heiskill proves an unexpected cast luminary as Reginald, who starts out providing quiet support to his wife, then steps into the spotlight with his rousing eulogy.

Seraphin’s direction keeps the pace spry while also giving some scenes (like the eulogy) room to breathe and build momentum. He also engineers the most seamless integration of video with live theater I’ve ever seen when Kenny and Logan step offstage to enter an Uber and a recording of their subsequent ride is projected over the stage. It’s one moment that reflects the overall excellent work by lighting designer Aja M. Jackson and sound designer David Lamont Wilson. Costume designer Amanda Jackson shines with subtle work like her incorporation of Bernard’s favorite color, yellow, into both of his daughter’s outfits.

The buoyant mood Seraphin maintains is almost enough to obscure some of the character deficiencies in “Biscuits,” with Brianna, for instance, coming off as little more than a plot device. Similarly, Edwards has a hard time elevating Simone beyond her sole character trait of “recently jilted by fiance.”

“Chicken and Biscuits” had a brief stint on Broadway a year ago, its run hampered by COVID-related problems. While its staying power now can’t be judged, initial reviews seemed disdainful of a show uninterested in delving too deeply into the complexities of the Black experience.

I found plenty to chew on between one-liners as most characters struggle with being an outsider in their own way. The play also delivers some pointed capsule commentaries, like when La’Trice summarizes one parental relationship by saying “a check ain’t a father.”

Being grounded, however lightly, in reality gives the show enough weight not to devolve into farce. Instead, “Chicken and Biscuits” spins frothy family drama into delightful feel-good fun.