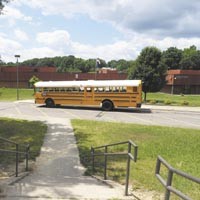 Susan Stokes is the model of a Richmond Public Schools principal on the last day of school. In her office she tries to appear relaxed while attempting to shake off the sometimes heavy mantle of authority she's worn since September. She clutches her black walkie-talkie instinctively, resisting the ever-present urge to call out orders.

Her large wood desk is covered in stacks of last-minute paperwork. She's dressed way down — appropriate to joining with kids for field-day games — in a baggy white T-shirt emblazoned in gold cursive script with “The Choice,” the school district's recently adopted $50,000 marketing slogan meant to draw parents back to the district.

One choice in particular, Stokes says, has been paying big dividends at her Overby-Sheppard Elementary School: a new behavior-rewards program introduced two years ago that eschews the city school system's zero-tolerance disciplinary policy. The program, which establishes a reward system for good behavior to stave off discipline problems before they start, is still in its early stages, but the results are promising.

In a school system that handed out 21,000 suspensions in the 2007-2008 school year, Overby-Sheppard is an underachiever. It suspended 74 pupils. This year, the school handed out fewer than a dozen suspensions.

Effective schoolwide discipline is a broad label for an educational theory gaining national acceptance as a replacement for prevailing zero-tolerance policies. At its heart the theory is about choices — encouraging pupils, parents, teachers, administrators, even school custodians, to think before making choices each day.

“The decrease in our discipline infractions is — the days of sitting here with children suspending them are over,” Stokes says.

Overby-Sheppard's pilot program — also implemented at three other city schools — is a major departure from past practice in the Richmond Public Schools.

Zero-tolerance education policies came into favor about a decade ago, a reaction to nationally publicized instances of school violence. Instituted to deal with violent infractions, such as bringing weapons to school or fighting, the policy's use has slowly expanded to include lesser infractions, such as talking back to teachers.

The new policy represents a swinging back of the pendulum, a reaction both locally and nationally to what critics of zero-tolerance policies say are sometimes-draconian methods of handling kids.

To the casual observer, the new policy looks more like a game than a disciplinary tool. Teachers, administrators and school staff wear pouches around their necks filled with colored slips of paper. The Soar Bucks — akin to Monopoly money — provide the basis for a system that relies on good old-fashioned child psychology.

Want a bad-behaving child to change? Reward the well-behaving child next to him, the theory goes, showering that child in praise and fake money that can then be used to buy real rewards like toys or tickets to attend fun school functions.Aÿ

Even participation in this last-day-of-school field day was a reward, requiring $80 Soar Bucks. Students who didn't earn enough to attend could be counted on two hands, Stokes says.Aÿ

Also, where past policy typically is imposed upon teachers, the new program employs teachers in not only enforcing the policy, but also creating it. Instead of forcing a new idea on them, Stokes says teachers were asked to create their own ideas — within the framework, of course, of effective school-wide discipline.

That input was the turning point for her faculty accepting the new policy, Stokes says. Teachers helped create a system for disciplining pupils, tracking and reporting infractions. That support adds weight when punishment is the last option, says Stokes, who gives parents full documentation leading up to children's punishment. “When you do suspend, it's not looking like you arbitrarily did this,” she says.

Zero tolerance, in contrast, metes out punishment swiftly and evenly — and there are no second chances. In past years, while the school system gained a reputation for suspending problem pupils, it went so far as to suspend children for not coming to school, or being late. At Fairfield Court Elementary School there were 485 out-of-school suspensions in the 2007-2008 school year — more than the population of the school. About half were pupils suspended multiple times.

For teachers such as Baylan Smith, who's taught fourth grade at Overby-Sheppard for five years, the switch from zero tolerance wasn't an easy sell. But Stokes chose him for the core committee that implemented the new policy.

“I like the zero-tolerance policy,” he says, mirroring a national opinion prevalent among teachers and administrators that the policy makes it easier to teach the kids who want to learn by swiftly removing the ones who don't. That's been the solution nationwide for the past decade or so, built upon discipline approaches developed to cope with a national rise in school violence that's occasionally rocketed into headlines with school shootings or assaults.

When Smith was asked to be part of a kinder, gentler approach, he says, “I'm not going to lie, I was skeptical at first.”

“It's called schoolwide, not classroom-wide. If not everyone buys into it, you can't back things up,” Smith says. “And it's hard to change sometimes.”

After two years, he says he's a believer in the new program: “[Teachers] see that it works, they see that it … means something to kids.”

“Kids will say, ‘Oh man, I want that Hannah Montana magic eight-ball so bad,’” he says. “They'll work their butts off.”

How big a change? “I've had zero referrals to the office this year,” he says, lauding a “pretty much perfect” school year filled with less time writing referrals, more time spent on instruction, with the result of better grades and test scores. “Other years?” he says. “I plead the Fifth on that.” S