A movie delivers the laughs, but not much more. 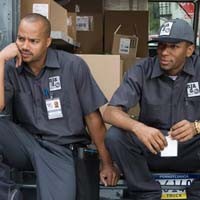 Who knows what the makers of “Next Day Air” were smoking, but after watching the movie the suggestion is probably something similar to what the characters continually puff. They all chase a package of cocaine through the movie that was delivered to the wrong address, and only one thing is certain when they catch it. As amusing as the action and dialogue may often be, someone forgot to give it a protagonist.

“Oh snap,” you can almost hear the filmmakers say, in the kind of hazy semiconsciousness delivered by their creations, “we forgot the main character.” Don't look at Mos Def. Despite being front and center in the promotional materials, he's at most a glorified cameo in the movie.

At least there are many memorable minor characters to amuse us, as a group of streetwise but bumbling hoods provide at least a few really good laughs, perhaps because they themselves were made by streetwise but bumbling people. The most entertaining of the bunch is a trio of criminally stupid, small-time gangsters, who botch a bank robbery at the beginning of the film when one of them mistakes the command “Get the safe” for something else. The three escape a hail of bullets not with the loot but with a bag of worthless security footage. “I thought you said get the tapes!” explains the hearing-impaired crook.

These three stooges of crime are arguing over their plight when a delivery man, Leo (Donald Faison, who we think is the main character but turns out not to be), accidentally drops off a large cardboard box of cocaine intended for the neighbors. The three criminals, assuming it was sent by God to help them, hatch a plan to sell the stuff to a couple of drug dealers while the neighbors and a Mexican cartel boss (Emilio Rivera, too captivating a character actor for the movie's good) search for the stolen bricks.

“Next Day Air” has its share of hilarious scenes, fortified surprisingly enough by unusually subtle comedy. But the parts never add up to a convincing whole. Curiously, a blood bath silences the laughs at the end, after which the most forgiving audience members will need to reorient themselves. Who was the movie about? What was the movie about? It's a shame “Next Day Air” was half-baked. Otherwise it might not have been half bad. (R) 90 min. HHIII S