Richmond sculptor Myron Helfgott still builds everything that comes into his head.

Ask artist Myron Helfgott why he's been a sculptor for more than 50 years and he's succinct. "The reason I make art every day is I want to see what's on my mind," he says, sprawled in a chair at Gallery A, the site of his latest show, "New Works."

Helfgott is retired from Virginia Commonwealth University's School of Fine Arts, where he taught and served as acting chairman of its vaunted sculpture department. A longtime fixture on the Richmond art scene, he's been asked to present the final exhibit at the university's Anderson Gallery, which will close when the school's new Institute for Contemporary Art opens in 2015.

For a man who's been creating since before Kennedy was president, it's incredibly fresh work with a decided sense of humor. Helfgott builds lightweight, shaped plywood frameworks over which he places photocopies of photographs he's taken. "I started in architecture school, design school, with Buckminster Fuller," he says. "Best education I ever got. To this day, I'm still fascinated by structure. I keep these pieces away from the wall because structure is important. They take much longer to make than the photos that go on top."

In the gallery, a visitor sees colorful images — a semicircle of women's backs, a leafy tree, a collapsed figure on a lawn — but all freestanding objects flaunting their sculptural nature. Walking behind "Hibiscus," a piece showing a lush, pink-flowered plant, the viewer finds a dead hibiscus ("I told the clerk, 'I wanna buy this hibiscus because I want to to kill it.'").

Behind an image of a lamp glows a real lamp, but behind the tree and women's backsides, there's nothing. It's intentional. "A sense of humor has always been important to me," he says, grinning. "There's nothing here that I knew what it would look like when I began. I start down a road, I keep improvising, and one day it's done." 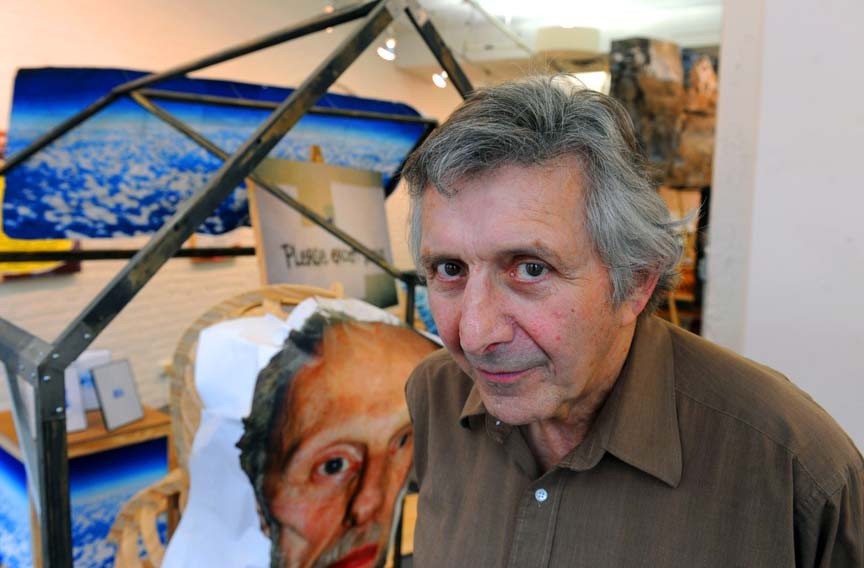 An early riser who says his best ideas come while waiting in bed for the 5 a.m. news to start, Helfgott admits to working seven days a week, although never specifically to exhibit. "I work every day. When we get done here, I'll go work some more," he says. "I work and stuff piles up, and Al [Calderaro, director of Gallery A] comes over and says this, this, this. I never work for a show."

It's a good thing because he's not getting rich off his art. "What's happening in art today is buyers want things that are pretty. They want to impress their friends. No one wants these. I haven't sold anything for 35 years. Now if one of the small pieces in this show sells, they're gonna break my record and I'll be pissed off," he says, joking.

Helfgott attributes his work ethic to wholeness, and Zen Buddhism. "It's like how a prizefighter practices, spars, preparing himself for when he's in the ring. There's no luxury to think in the ring because if you think, you're gone. All the preparing goes into that. I read, I think, I take notes. When I get in the studio, I don't think. Sometimes you run out of ideas, then something happens and you make art."

The need to create allows Helfgott to flex his problem-solving muscles. "It's interesting for me to figure things out. When I started making 3-D sculpture, I didn't know how to do it. I didn't have any idea. Every pissant idea that comes into my head, I build. If you're going to do good things, you're also going to do crap, else it's all mediocre. When I start, I don't know if it's going to be decent or not." That trial and error process informs "Satyr and Nymph, After Matisse," demonstrating a clear grasp of multiple 3-D figures, one he says came after multiple attempts.

To young artists, he advises: "Don't do this if you think you can make a living at it. Do it because there are ideas you want to see objectified." As for himself, he has no plans to slow down. "What I want to do is start building 3-D structures and put photographs on with no relationship and then bring them together. That's in the pipeline. In order to start, I have to put two pieces of wood together. It's going to happen, but I don't know how yet."

It's what he did for "Cemetery" with its tombstones, dog and teddy bear. Speaking of gravestones, he's planned the wording for his own: "He was a fucking asshole."

And a consistently innovative sculptor. S