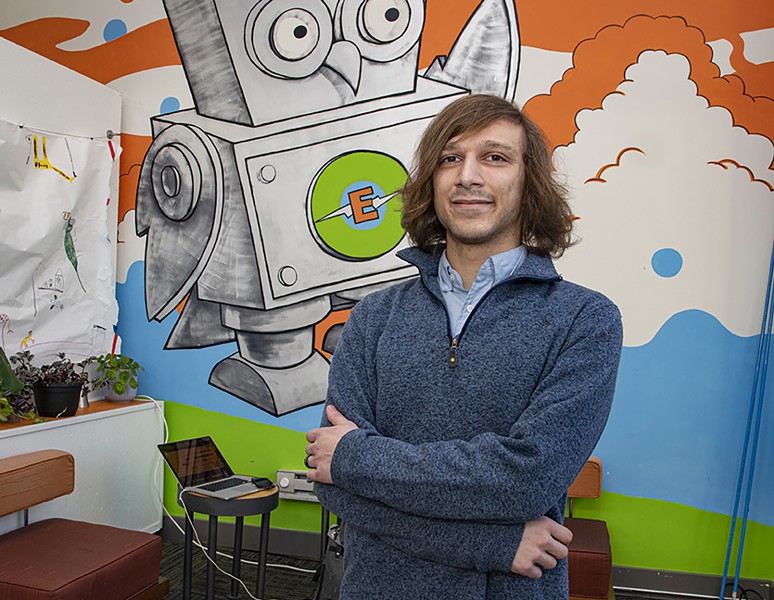 One of the many things the pandemic has shown us is the digital divide, or unequal access to computer technology that exists for Virginia students.

Chris Dovi, executive director of CodeVa, which partners with schools, parents and communities to increase computer education opportunities, gives high praise to Zach Mulcahey, noting “he has already impacted thousands of students in the Richmond region, many of whom likely would not have gone on to engineering and computer science programs at the university level without his support, encouragement and mentoring.”

Mulcahey started with CodeVA right out of Patrick Henry High School in Ashland. A few years later, he is now a field researcher on a National Science Foundation-funded research grant awarded to MIT and was selected this year as co-presenter at the national International Technology and Engineering Educators Association (ITEEA) conference, where he presented work he “pioneered as a teenager at CodeVA on integrating arts into computer science education as a vehicle for engaging underrepresented and minoritized students in computing.”

He also serves as CodeVa’s robotics programming manager and has worked throughout the pandemic to establish intramural robotics teams in the Richmond metro region. He was instrumental in supporting programs for students in public housing and local community organizations such as the Boys & Girls Club, Henrico PALS, Friends Association, and Richmond Region Council of LULAC (League of United Latin American Citizens); CodeVa is actively publishing a bilingual computer science activity booklet to help reach the Latin community.

Mulcahey has worked full-time with CodeVa since 2017 and says what he loves most about working with K-12 students is witnessing that ‘wow’ moment.

“A lot of what we do here isn’t teaching a student to go from nothing to full-on app developer," he explains, "but rather exposing students to amazing things you can do with computer science, especially combined with arts and crafts.” He is particularly proud of a recent co-project with Performing Statistics, which highlights youth incarceration problems, where students of CodeVa helped create an interactive mural while also expanding their knowledge of a larger social justice issue.

Going back to the digital divide: CodeVA gets a surplus of used laptops from various organizations (Altria is a major donor). Mulcahey has taken extra effort to lend laptops to students who were lacking, or even make full-on computer donations to families. Robotics programs and competitions are also expensive, but Mulcahey found a way around that: He created his own CodeVa Robotics League for Richmond which provides all the supplies for students.

Looking ahead, he hopes to secure funding to add agriculture to his robotics program (a “Farmbot”), which he sees as “the glue that holds together programs teaching students about nutrition, ecology, technology and proper eating, and how to sustain yourself.”

Impressively, Mulcahey has done all this by the age of 25, while discovering a lot about how he wants to live the rest of his life. “Something I’ve learned from CodeVa is I really enjoy helping people, and just helping them see the possibilities out there,” he says. “I’ll continue doing that in some way forever.”