You're gonna need a bigger boat 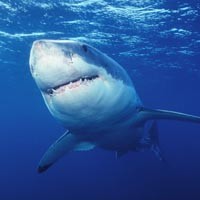 Ever since the opening skinny-dipping scene of Stephen Spielberg's 1975 film “Jaws,” modern America has developed an intense fascination and fear of sharks. Visual impressions like that hardly go away for most people, but it certainly hasn't stopped marine biologists and researchers from gaining a better understanding of these ocean-dwelling predators. Looking to one-up the Discovery Channel's paltry week of programming, the Science Museum of Virginia will launch its own summer-long educational exhibition, Shark Space. Featuring petting tanks, IMAX documentaries, even a display of things found inside the feeding machine's stomach, the event will also host a preemptive visit on June 25 by Celine Cousteau, the granddaughter of legendary underwater adventurer Jacques Cousteau. Kicking off officially on Saturday, June 27, with the Scooper Bowl, a day of ice cream and the launching of water balloons and piAñatas via a large trebuchet, which may not have much to do with sharks, but still sounds cool, the summer of sharks begins at 10 a.m. Shark Space runs through Nov. 1. Admission is $9-$12. Call 864-1400 or visit www.smv.org.