Henley Street's "Lord of the Flies" brings the energy. 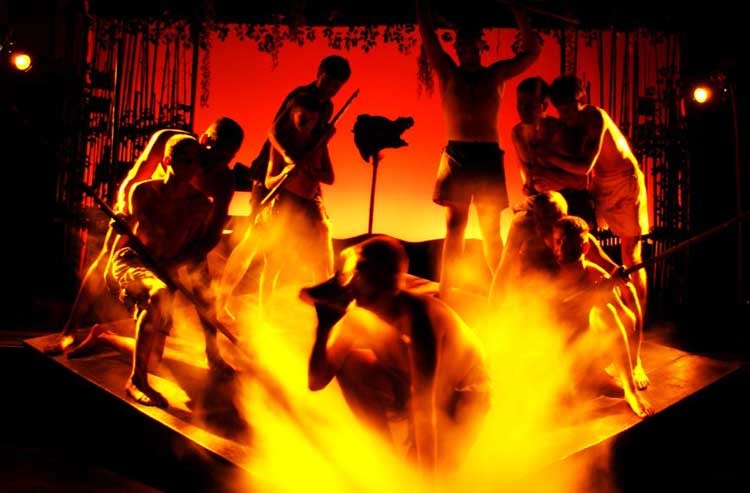 William Golding was well versed in mankind's violent ways. After aiding in the hunt that sank the German battleship Bismarck, and commanding a landing craft at D-Day, Golding saw not only the cruelty of war, but also how close it was to the brutality of his youth. That observation informed his seminal first novel, "Lord of the Flies."

The story, adapted for the stage by Nigel Williams, follows a group of British schoolboys who survive a plane crash on a tropical island. The lads' attempts to establish civilization and their ultimate descent into violent anarchy display Golding's view that humans are much more inclined to savagery than we might think.

The biggest highlights of Henley Street's production are its young cast members. They display an impressive amount of energy and talent while they leap around and pound the stage with spears.

Drew Sease channels his inner barbarian as the older schoolboy Jack. His evil, bloody grin is the kind of image that will stick with you long after you've left the theater. Matthew Barger does a fine job as the pathetic intellectual Piggy, but his accent renders 40 percent of his speech incomprehensible. Sean Wyland is engaging as the Christ-like Simon, exemplifying mankind's natural morality. And the emotional breakdown of Eric Evans' Ralph in the show's final hour shows the skill of a much more experienced actor.

Despite these strong performances, Josh Chenard's direction is difficult to follow, and much is lost in the story's conversion from page to stage. Important points in the show, such as Simon's discovery of the dead parachutist, will be lost on the audience unless they're familiar with the source material.

The show is well staged otherwise, with a more minimal but effective set by Jason Winebarger and a great lighting design by Joe Doran and Andrew Bonniwell. If you're a fan of the novel and don't mind refreshing yourself beforehand, this show is a fine — if often wild — night of theater. S