Richmond's youngest anchor is getting the job done — and getting noticed. 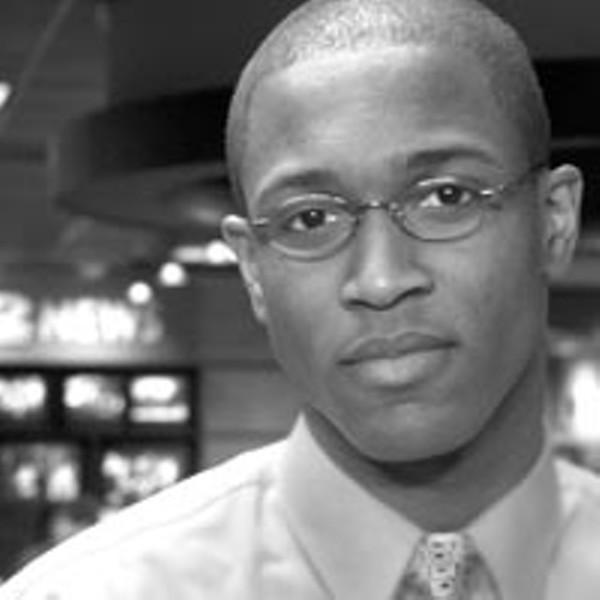 Gilchrist headed up the first hours of WWBT-TV 12's live coverage of the fire. As the midday anchor, Gilchrest was at the center of his station's wall-to-wall coverage of a story that would challenge far more experienced anchormen.

At 24, Gilchrest may be Richmond's youngest television anchor. But he's become a hot property, drawing attention from colleagues, competitors and agents, not to mention viewers. His deft handling of the fire coverage and how he communicated with viewers, seemed to reinforce that image.

But what frightened him wasn't the pressure of the story. It was watching the fire burn out of control. He was afraid it would consume the city — his city.

Still, his anxiety never got in the way of providing knowledgeable commentary. He expertly identified buildings and cross-streets, even the locations of the closest fire stations. Working without notes, he narrated helicopter images being fed to the station. All he had to rely on was his intimate connection with the area around VCU, where he went to school. It would be long minutes before the station had a reporter on the scene, and he was on his own.

"I felt like I handled it pretty well," he says now.

Gilchrist performed superbly. But accolades are nothing new. He's been earning them since he was at Binford Middle School (where he was student-body president) and Richmond Community High. A native of Queens, N.Y., Gilchrist moved to Richmond when he was 7, when his grandparents, who raised him, retired here.

"It was no surprise to me when he wound up on TV. He's always had a flair for being in the public eye," says his best friend since sixth grade, Benjamin McClellan, now an Army second lieutenant at Fort Gordon, Ga.

Paula Otto, assistant director of the school of mass communications at VCU, agrees: "Aaron took my class in TV reporting when he was still in high school. He was better than a lot of the college-level students. He showed a lot of natural talent and determination. I think the sky is the limit for Aaron."

Gilchrist has wanted a career in television since he was 16, when he anchored a voter-registration program aimed at high-school students on public-access cable. "I sweated bullets," he says, "but that made me decide on broadcast journalism."

Veteran Channel 6 anchorwoman Cheryl Miller recalls seeing Gilchrist on cable. "He was destined to be on TV," she says. "With the right kind of talent coaching, he can go almost anywhere." That's unusually lavish praise from the competition in a take-no-prisoners business.

Gilchrist will celebrate six years at Channel 12 in October. He started as a tape editor when he was a freshman at VCU. Six months later, he began a three-year stint on the assignment desk "to learn some news judgment," he says. In 1999, he started doing morning traffic reports. "It was rough in the beginning," he says. "I had one woman stop me and tell me I was so bad."

"He could not be easier to work with," says his morning co-anchor, Andrea McDaniel. "I think he can do whatever he wants. We just hope he stays here with us for a little longer."

His noon co-anchor, Antoinette Essa, notes that Gilchrist is her daughter's age, but she says he's ready for a Top 10 market or even a network position. "He's the best thing we've got," she says.

Essa also says she thinks Gilchrist is less sure of himself than he should be. "I think he's a little scared, even though he doesn't say it."

Relaxing in shirt sleeves after a noon newscast recently, Gilchrist doesn't admit to any fears, but his modesty shows. "I'm not comfortable with celebrity status," he says. "I go to work. I do a job. I'm expected to do it well, and that's what I try to do."

He acknowledges that he's getting calls from talent agents. "Sometimes they want me to write down their numbers," he says. "Most of the time I throw them away. Channel 12 is the place I got my feet wet and grew. The station fits me and I assume I fit them. Things will progress in the way they can, when they can."

Right now, things are progressing well. He's vice president of the Richmond Black Media Professionals. When he served as host for Style Weekly's "16 Under Sixteen" awards program this year, the audience loved him. Richmond Magazine, noting his "pitch-perfect taste in clothing and accessories," named him 2004's Best Richmond Metrosexual. The ratings for WWBT-TV's morning news are up 18 percent over last summer, and management couldn't be happier.

One of his pleasures is speaking to high school students. "Sometimes it seems that positive examples are in short supply for young black males in this community," he says. "I hope that I'm able to show kids that you can come from meager beginnings and still find some success in life."

He lives alone in an apartment three minutes from the station. "It's nice to have your own space and room to spread out and be messy." There's no significant other in his life right now. "I think I'm one of the most uninteresting people in the world," he insists. "I'm just a regular guy." He's happy where he is, doing what he does. S