One of Richmond's most promising jazz trios makes every note count. 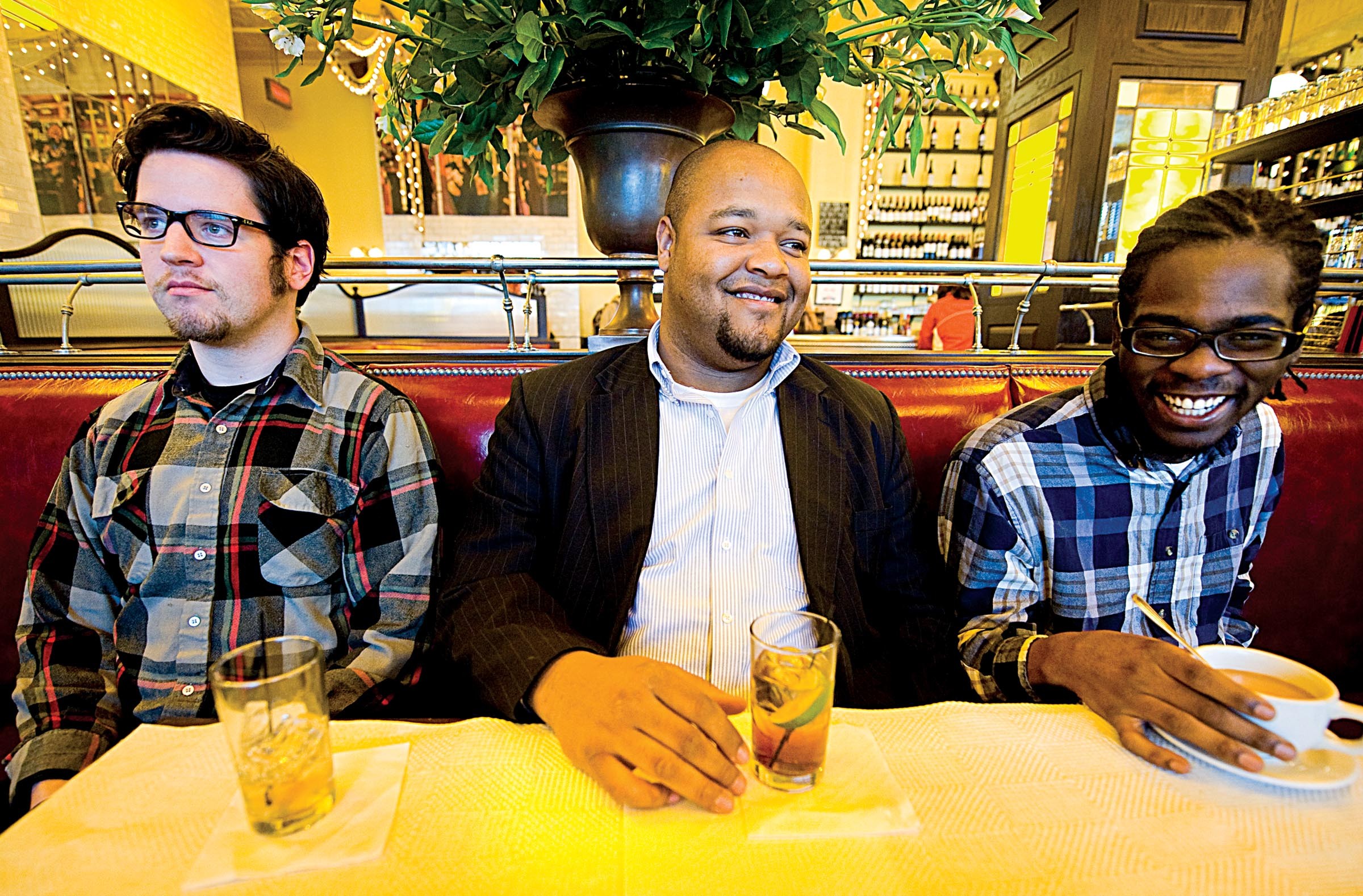 The Marcus Tenney Trio, featuring three of the best players in the city, is an egalitarian high-wire act. At their monthly Sunday night gig at the Commercial Taphouse & Grill, as they navigate a classic mid-'60s Joe Henderson tune with balanced grace and intensity. Saxophonist Tenney powers through the melody with lyrical unpredictability. Devonne Harris sets off a kaleidoscope of controlled explosions on the drums. And Andrew Randazzo melds the lines together with a deeply responsive pulse.

"It's like an earthquake," Tenney says. "I like to feel the bass and I hear the drums. Devonne is all the noises, the buckling supports, the glass and concrete crashing to the ground. Andy is the ripples in the ground, the actual movement of the earth. And me? I'm just trying to survive."

Adapting has never been one of Tenney's problems.  He's best known as a trumpeter — the instrument he still plays as a founding member of the No BS Brass Band. Saxophone was his first choice when he signed up for his middle-school band, but they needed trumpeters instead. (A surprising number of musical paths are shaped by the ensemble requirements of middle-school music teachers). Tenney got his second chance halfway through Virginia Commonwealth University when he got a saxophone abandoned by his brother. "I feel in love with it," Tenney says. "For the past few years I've played more tenor than trumpet."

Steady gigs and late nights resulted in taking a fifth year to get through VCU. One upside was an extended overlap with the three-year-younger Devonne Harris, whose drum kit was set up next to Tenney's second trumpet position in VCU's premiere Jazz Orchestra I.

"Devonne is just a super musician," Tenney says. He recalls VCU Jazz Program director Antonio Garcia asking Harris to clarify the rhythms in complex arrangement. "He would tell him to play the saxophone rhythms on the snare with his right hand, the trumpet rhythm on the high hat with his left hand, and the trombone rhythms with his foot pedal on the bass drum. Devonne would try one time, stumble, look at the drums for two seconds and then do it perfectly."

Harris was the link to Randazzo, who arrived at VCU the year after Tenney graduated. In jazz, bassists are always in demand, but they were in short supply when he arrived. As a promising freshman, Randazzo frequently was teamed with Harris, who by then was the star of the drum program (and had just been recruited to John D'earth's prestigious Thursday night gig at Miller's in Charlottesville). "When recital season came around, Devonne and I played together on half of them," Randazzo recalls. At one he played with Tenney for the first time.

Shortly thereafter, the three were playing in Tenney's Quintet (along with guitarist Chris Ryan and pianist Brian Mahne). It was a good band, but when they stripped the group down to a trio — a lineup championed by Sonny Rollins and Tenney's saxophone idol Joe Henderson — they broke into new territory. "It was unlike anything we had played before," Harris says. "It was so natural, so easy to explore, to take musical risks, to expand the boundaries. We put away our instruments on a mental high."

Despite Tenney's name on the marquee, the band is very much a collaborative effort. Everyone writes, everyone leads, and no one is in the shadows. "It's hard to put into words," Randazzo says. "Marcus was just playing sax, I was new to the scene, and we kind of evolved together."

Harris' keyboard facility provides the unusual ability to add guest drummers in occasional "trio-plus" lineups. Whatever the changes, the adventurous trust at that heart of the band shines through. "When I play with other musicians it's like a vacation," Harris says. "But when I play with the musicians who know me best — when I can unpack, sit back and be in my own space — it's like coming home." S

The Marcus Tenney Trio, along with Glows in the Dark, plays Balliceaux Wednesday, Feb. 27 at 10 p.m. All members of the band play in the RVA Big Band every Monday at Balliceaux at 9:00 p.m.