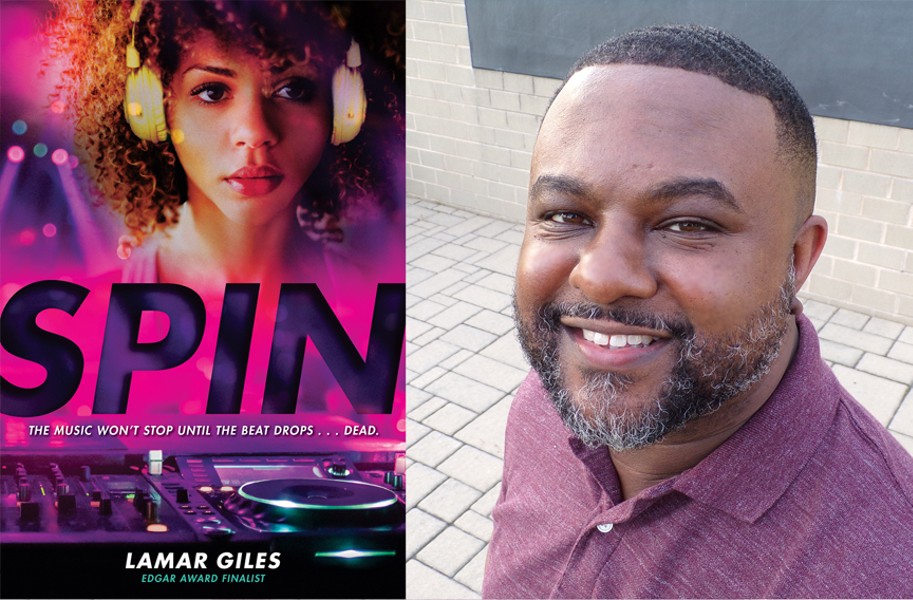 Adults, being adults, still engage in a lot of head scratching about teenagers — worrying about how much time they spend in front of screens, whether their lives are compromised by a lack of privacy and, the perennial one, how they'll turn out in the future.

"Spin," the latest young-adult novel by Virginia author Lamar Giles, definitely won't ease these concerns — and probably will make the adults worry even more about what happens on Twitter. Nonetheless, it's an entertaining book with lessons for younger and older readers.

The book is set in a fictionalized Hampton Roads, although readers will find many similarities with Norfolk and Virginia Beach. "Spin" is a murder mystery told through the eyes of three teenage girls: Paris aka DJ ParSec, an up-and-coming DJ and composer; her childhood friend Kya, the brilliant-yet-nerdy girl who got left behind as Paris became famous; and Fuse, who took charge of marketing Paris on social media and built an out-of-control online fandom.

So, how did Giles, a 39-year-old man who grew up in Hopewell and attended Old Dominion University, write authentically in the voices of girls a generation younger?

"I have so much help. Everybody who reads my books [before publication] is a woman," Giles says. "My editor, my agent, my wife, my writer friends. So, I always feel confident that I'm doing a couple of things: A. making sure I listen to them and B. I never try to write a thesis on what I think a girl character should be. I think that's a mistake. I try to treat every character as an individual. It's never, 'This is how a girl acts.' This is how Paris acts. This is how Kya acts. This is how Fuse acts. As a technique, this works well."

With positive reviews in The New York Times and Kirkus Reviews, and having been named an Edgar Award finalist twice, Giles has gradually built a strong reputation for his work, which brings young black characters, often girls, to the forefront, in an industry that often has focused on the stories of white children and teens. Giles co-founded We Need Diverse Books, an organization that advocates for representation of different races, ethnicities, abilities, religions and identities in children's books, and edited an anthology, "Fresh Ink," in collaboration with the group last year.

"Spin" takes inspiration from eastern Virginia's hip-hop scene, which has brought us such legends as Missy Elliott, Timbaland and Pharrell Williams. The novel opens with Kya and Fuse in separate rooms at the police station, answering questions about Paris, whom they found dead and bloodied over her DJ equipment. Anger, sorrow and guilt over petty disagreements all spill out over the pages, along with several mysteries behind the DJ's death and her quick change in circumstances along with new fame and fortune. Class, money and respectability politics pop up throughout the novel, as well as societal injustices.

Giles got the idea for the book after reading an article in Complex a few years ago about online fandoms — think Beyonce's Beyhive, for example. In "Spin," Paris' fans are known as ParSec Nation.

"There was just one line in the article: 'If you don't like Beyonce's last single, the Beyhive will annihilate you.' As a thriller writer, that just stuck in my mind, and I recognized there's some truth in it," he says. "It just snowballed from there, like what would happen if there was an online fandom and heaven forbid something horrible happened to the person they admired, so now they're sort of unmoored. What would they do?"

In "Spin," a character jokes that Beyonce could start the Purge, 12 hours when all crime is legal, with one tweet. "That's essentially the jumping-off point for everything else that happens," Giles explains, and the novel's ParSec Nation fandom is behind a lot of the scarier moments in "Spin."

The book is a fast-paced thriller, with plenty of details that may seem a bit far-fetched, but Giles is careful to ground his characters in real-life feelings — particularly grief at their friend's death. At one point, Kya meets with Paris' grandmother, which slows the novel's quick pace and brings home authentic grief and pain.

"You're still talking about death and the grieving process, and although the primary goal is to entertain, I feel like you're doing a disservice to characters if you don't address how grief actually affects people," Giles says. "When someone's gone, they're gone. You needed those scenes to ground the mystery. I've got some fairly high-concept, borderline ridiculous things that happen in the things I write, and I feel like you need that extra filter of reality. I also wanted to talk about how celebrity and fame can drive wedges between family."

The launch party for "Spin" will be held at Hai Y'all on Saturday, Feb. 2, from 1 to 3 p.m. For information about "Spin" and the party, visit chopsueybooks.com.