Opinion: Wrong Side of History

The mayor’s meals tax proposal is the latest in a long line of disingenuous political ploys. 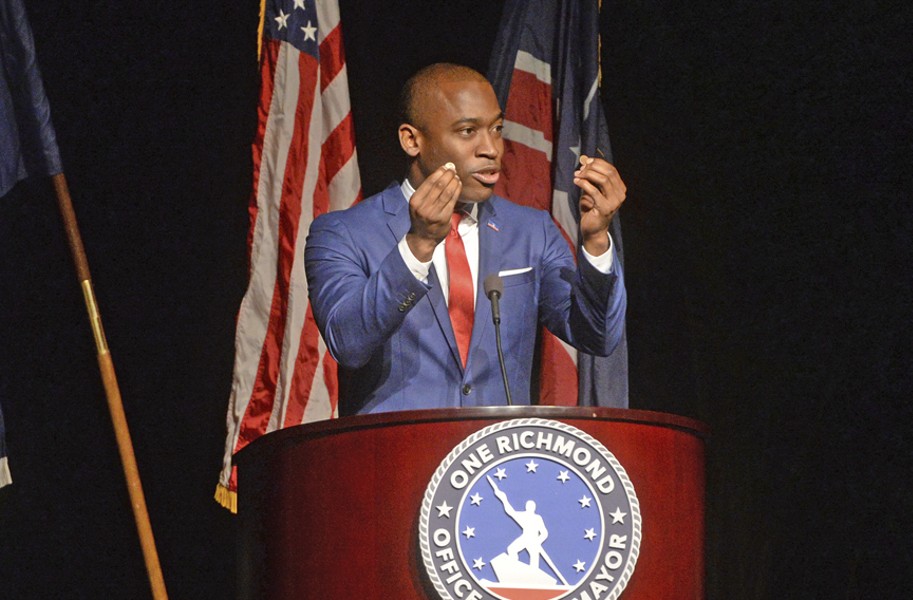 Scott Elmquist At the State of the City address, Mayor Levar Stoney holds up two pennies as props for illustrating his meals tax increase.

"Education is the great equalizer," Martin Luther King Jr. proclaimed. "That's why they make it so hard to get." By "they," he was referring to government leaders.

Unexpectedly, Mayor Levar Stoney has proposed a record 25 percent increase in the city's meals tax. Backers tout it as the bold financial fix necessary to modernize the city's aged, obsolete and unhealthy school facilities — our real concrete monuments to segregation.

Just last month they blasted the School Board's phase one modernization approach as not doing enough to begin fixing these crumbling facilities. But a Sunday Richmond Times-Dispatch article noted that Stoney's bold proposal does a third less than what his team derided.

Puzzling, right? It only gets worse. The article says that "School Board leaders have praised [Stoney's proposal]." What is going on? It's simple: Richmond Public School students, 90 percent minority and overwhelmingly from families with limited means, are being played again by their elected leaders.

In 1954, the famed Brown v. Board of Education decision said localities like Richmond denied students equal educational opportunities. In 1955, a second decision, known as Brown II, ruled that Richmond had a legal and moral obligation to fix inequalities "arising from the physical condition of the school plant." City leaders promised they would. They never did. Quite the opposite: They knowingly shortchanged school maintenance and modernization funds.

But in 2018, when it came time to walk the walk, not just talk the talk, Stoney and his moralizing allies stumbled badly.

The mayor's proposal barely funds modernizing a few schools in the next five years. While his tax is levied for decades to pay off construction loans, Richmond's decrepit school problem would actually get worse system-wide.

Bottom line: Stoney and his self-proclaimed progressive allies leave the overwhelming majority of poor, minority children they claim to champion in the same intolerable conditions without a fully funded plan to fix them. Moreover, the several touted projects are in only a few areas, despite rundown facilities in every City Council district.

The charter-change mandate is sensible and fiscally responsible. Elected officials should first try to rein in bloated government bureaucracies, end sweetheart deals for the politically well-connected and reprioritize spending. If such savings can't fund the necessary plan, then tell us, says the charter change. Given Richmond's costly government, raising taxes should be the last resort, not the first.

Sadly, this is the latest disingenuous political ploy since Brown II. The bill for the intentional facility neglect has come due. Candidate Stoney said it would be immoral not to pay it. But Mayor Stoney, like those he formerly lambasted, claims we don't have the money to do more.

But we do. For example, we can fund upwards of three times more school projects all without a tax increase. It is a tragic mistake to defy the people's will, especially because the educational change Richmond needs requires the widest possible community support.

Stoney says we lack resources. The facts say otherwise. What is lacking is the political backbone to end wasteful, corruptible, sweetheart politics as usual and the passionate commitment to redirect those funds to keep broken promises made to minority children.

I wrote this opinion piece in Los Angeles. When I return, several detailed unifying modernization plans, in keeping with the will of the voters, will be presented to the referendum committee.

Referendum backers know Richmond can show Virginia and America how to get on the right side of history. S

Paul Goldman is the former chairman of the Democratic Party of Virginia.