A Muslim father and daughter spread tolerance through textile. 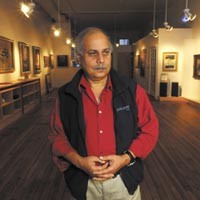 JetBlue and the Transportation Security Administration are just emerging from a media bombardment over a $240,000 settlement paid to an Iraqi-born U.S. citizen, who in 2006 was forced by the airline to cover a T-shirt with an Arabic inscription before boarding a flight. But in a new gallery on Broad Street, far from any airports, Arabic script lines the walls. It's the attempt by a father and daughter to shed a tolerant light on their religion through the visual arts.

In early December, the new venue, ISHQ Gallery, held its first show, “Islamic Calligraphy: Based on Qur'anic Verses,” featuring ornate Arabic calligraphy on textile collage by Qaisar Iqbal. The show was so well received that Iqbal's daughter, Mariam Eqbal, also the gallery director, decided to extend her father's exhibition through Jan. 25. (An error by the U.S. State Department resulted in Iqbal's children's last names being changed to Eqbal, trivial to them considering the amount of paperwork required to correct the mistake.) The two say the exhibition is a work of love, which is fitting considering “ishq” is Arabic for the highest form of love, or love without lust.

“Art is for everybody, every religion,” he says.

Immigrating to the United States from Pakistan 10 years ago, Qaisar imported a lot of talent as well: his wife, who received her master's degree in textile, and their offspring, who would become artists themselves. Among them was Mariam, who graduated from Virginia Commonwealth University's Kinetic Imaging Department in 2007.

Now as ISHQ Gallery's director, Mariam hopes the space, with the peaceful and sophisticated works of her father, can help bridge gaps in U.S. culture by showing the softer, often misunderstood side of Islam. Both father and daughter agree that artists have a tremendous responsibility in promoting social change.

“Hopefully we'll come to a time [when everybody will be] perceived individually as opposed to where they belong or what affiliations they have,” Mariam says. “They're always putting these boundaries on people through stereotypes.”

The exhibition comes at a tenuous time in Arab-U.S. relations, with both the recent settlement of the JetBlue case and a public apology from AirTran Holdings for booting nine Muslims from a flight on New Year's Day.

“What I see happening now is that there are so many more activist groups now because of the war in Iraq. Ever since 9/11 people have just been turned on to international issues whereas before, no one even knew where Pakistan was,” Mariam says. “Take the bombing of Gaza for example, which is continuing: I think these international issues need to be awakened and in front of the public's eye because most people are blind to information unless it is forced upon them somehow. Through art we can do that in a neutral sense without having to go to war or having some major catastrophe happen.”

Qaisar and Mariam contend there is no message in the art; merely that it transcends ethnic and social boundaries — a type of self-expression that should be appreciated in a country with such generous liberties and freedoms.

“Coming from a country such as Pakistan where self-expression is not always welcome or looked greatly upon, [my parents] took it upon themselves to escape that and still practice the arts,” Mariam says. “It's unfortunate that these issues get highlighted by something so negative, but I think it's about time people started venturing outside their own boxes they create for themselves.”

Mariam says that while the gallery is about art regardless of agenda, an occasional headline-grabbing global issue will guide the message of future exhibitions. “We want to promote different cultures, different religions, socio-political issues, cultural issues, artists from not just Richmond but hopefully all over the world.” S