No one can escape death and taxes, right? Meet Jon Klein. 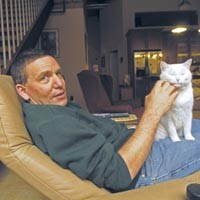 Jon Klein will not pay taxes this year.

He has not, in fact, given the federal government a dime since 1982.

Not a crafty accountant, or a nominee for an Obama cabinet post, he's a social activist taking part in some good old-fashioned, nonviolent protest.

“To me there's a difference between a tax cheat and a tax resister,” he says. “I'm a resister. I'm very open about it.”

Indeed, every year Klein fills out the forms and lists his earnings and charitable donations, but instead of dropping in a check, he'll offer up a quotation for some glum tax processor to ponder.

For years it was a line from murdered Archbishop Oscar Romero of El Salvador: “In the name of God: Stop the repression.” This year he's selected eight lines ranging from Fyodor Dostoevsky's prose to former Federal Reserve Chairman Alan Greenspan's observation, “everyone knows: The Iraq war is largely about oil.”

Wearing jeans and a crewneck sweat shirt, Klein, 53, has a friendly demeanor. He grew up in the suburbs of New York City, but along the way developed a concern for social justice at home and abroad.

In the early 1980s, Klein left New York for West Virginia where he earned a master's degree in social work. He started exploring the work of Henry David Thoreau, Mahatma Gandhi and Martin Luther King Jr., all advocates of nonviolent social change. Their thinking took hold.

During his second year in graduate school he sold his car. Instead of paying rent, he camped out in the scorekeeper's box over a baseball dugout in a park. Klein lived “pretty much like a gypsy,” he says, though not exactly carefree. He became troubled by what he saw in American foreign policy.

“I did not believe then and I do not believe now that our military is being used primarily for defense,” he says. “I see it as being used to exploit other countries. I think the world order is very unjust” — and he did not want to help pay for it.

So on April 15, 1982, he marched into the federal building in Wheeling, W.Va., and waited in line with his fellow citizens.

“I'm just here to report that I'm no longer going to pay federal income taxes,” he told the clerk.

Well, she said, I can't help you then. He turned down the hall to the FBI office and planned to turn himself in. An agent ushered him to the back and launched into a sermon about how he's sure this seems like a good idea now, but one day he'll want to get married, buy a house, have kids — and it just won't work. Klein nodded and left, figuring he'd been honest and that was all he really owed.

The next year he followed a boyfriend to Richmond and started volunteering for a group advocating for death-row inmates. He grew close with one who ended up being executed in 1985.

“That execution really kind of awakened me,” Klein says, setting his jaw, still struggling with it more than 20 years later.

He stopped paying state taxes after that.

The boyfriend left, but Klein stayed and went on to launch three nonprofits. In 1988 he started the Richmond Street Outreach Project, deploying squads of recovering drug addicts into the night armed with one-ounce bottles of bleach to teach their former compatriots how to sterilize their kits in hopes of slowing the spread of AIDS.

He went on to found the Richmond Organization of Sexual Minority Youth (ROSMY) in 1991, and Diversity Thrift in 2000. Last week Equality Virginia honored him as one of the 20 “OUTstanding Virginians” at the organization's annual banquet.

Over the years, Klein's gotten plenty of attention from the IRS too. It used to call him into the office and demand payment. He'd refuse. It went on like that until one day about 10 years ago, he recounts:

“They said, ‘You need to come into our office to talk about this,’ and I said ‘No, I’m not coming any more, this is pointless.' … And the agent on the other end of the line was like, ‘I don’t know what to say, no one's ever said that to me before.'”

Debbie Trotter, spokesman for the IRS's criminal investigation division, says the IRS investigates nonpayment and pursues charges on a case-by-case basis. Jail time is one potential outcome, but there are civil punishments as well.

Klein has no bank account to seize and no property to speak of. Instead, he rotates through a set schedule of staying with different friends — well-appointed houses and luxury condos three nights a week, spending the remaining four at his boyfriend's apartment. He consults for a nonprofit and does some pet sitting. This year he estimates he owes more than $1,400 in federal taxes and $130 to the state.

“Basically they're either going to have to put me in jail, or ignore me,” he says. “And so far they've ignored me.” S