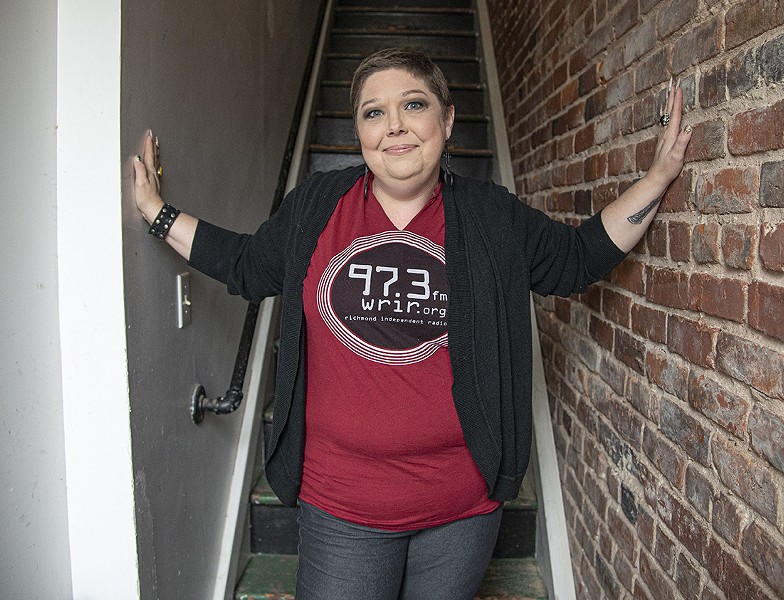 Melissa Vaughn, president of the Board of Directors for the Virginia Center for Public Press, WRIR’s nonprofit parent company. A former Style Weekly Top 40 under 40 winner, she co-hosts RVA Dirt’s Municipal Mania show as well as the Quick and Dirty Council Round-up.

After sixteen years crammed into a second floor studio apartment space, atop a narrow and steep old stairwell above the Camel nightclub at 1621 W. Broad St., a Richmond nonprofit public radio station is searching for new digs.

Organizers for the volunteer-run WRIR-LP 97.3 FM say they plan to either purchase a 2,500-plus square foot building, or build their own space from the ground up by this time next year. If they do end up building, that time frame is optimistic, they admit.

To help the process along, they're asking the public for assistance in several areas, including legal and zoning advice as well as physical labor to help move their server rooms and separate tower, located in Gilpin Court, plus some expertise updating the acoustic set-ups for any new studios.

One of the main problems with the current space is the lack of access for the disabled community, says Melissa Vaughn, president of the board of directors for the Virginia Center for Public Press, WRIR’s nonprofit parent company.

“We call ourselves the community radio station, but if it’s not an accessible building, we’re excluding a good-sized portion of the Richmond community and that’s against our mission,” she says, noting that the station is not ADA [Americans with Disabilities Act] compliant. Other reasons for the move include better soundproofing and the need to expand the space as WRIR and its team of 150 unpaid volunteers continues to grow.

Vaughn says that relocating the station has been one of her primary goals since she began leading the board in 2020. However, the pandemic had other plans. “Then my goal just became volunteer safety and keeping us on the air."

During the height of the pandemic, Vaughn says the station stopped accepting new volunteers for safety reasons, though it’s now starting up again. They want to hold workshops to teach people how to deejay and produce programs, she says, noting they could use more space. “[Also] we would love to give bands a venue, a nice place to play and record, maybe live-streamed out.”

Following this thought, Vaughn gives a quick shout out to the many local musicians who have lugged their equipment up to WRIR to perform over its airwaves. “Being willing to come up those treacherous stairs, our stairs are legendary,” she says, adding that WRIR shares a parking space and “scary spiral staircase” out back with the Camel nightspot, which has been a great neighbor.

However, being located above a restaurant and live music venue doesn’t make it easy to create good audio.

“Our soundproofing has never been good enough,” says Vaughn, who co-hosts RVA Dirt’s Municipal Mania and the Quick and Dirty Council Round-up, popular shows on WRIR. “It makes it difficult to get good sound quality out of our news studio.”

The station renewed its five-year lease in 2019, but it could leave early after a termination fee, she says. The good news is that WRIR is financially able to purchase the new building (or build) without depleting its reserves, she explains. The station sets aside $150,000 in reserve money, just in case all their equipment ever needed to be repurchased. Like if a hurricane rolled through, or given their location, maybe a really loud band. 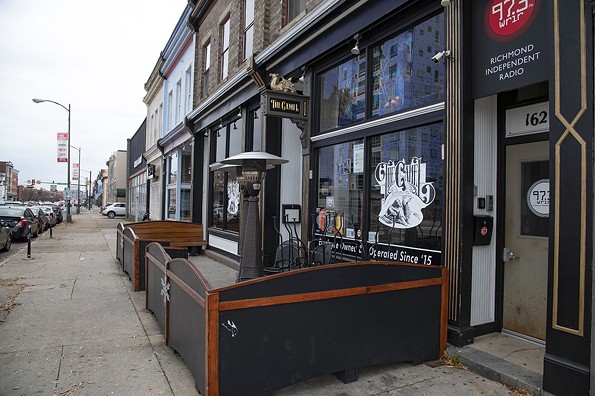 So far they’ve looked at a few places, Vaughn says, adding that wherever the station lands they want it to be visible, a part of the community, and on the bus line.

“South Side would be cool, but we don’t want to pigeonhole ourselves,” she says. “Right now, it hasn’t been easy to find a building.”

While the local housing market remains cutthroat, now should not be a bad time to be shopping for a commercial real estate space in Richmond, according to LJ Rafalko, a longtime VCCP board member.

“Commercial office culture has changed, there’s been proof of concept that you can work from home and maintain the business,” says Rafalko, whose background as a financial data analyst at Sun Trust/Truist, has made him a go-to member of the board on fiscal matters. “What I hear is that, as far as office space and storefront space, it’s a good time to be shopping.”

The biggest costs for WRIR's relocation would most likely include the build-out, soundproofing and a decent HVAC system, plus the potential for electrical updates. “A lot of stuff will convey - we’re not starting from the ground up,” Vaughn says, adding that they might need extra fundraising for any new equipment.

Another challenge is zoning in areas of Richmond that are becoming part of the transit-oriented nodal district (or TOD-1), Vaughn says. WRIR, which is required to remain within the city limits, is zoned for general business (B-5). “We were looking at a Scott’s Addition property and after talking to folks from planning, it seemed like a lengthy S.U.P. [Special Use Permit] process, something we don’t really want to get into.”

Rafalko applauds Vaughn’s steady leadership for “putting a fire under” WRIR to relocate, adding that he still likes the Scott’s Addition space, though a "special use variance would be an issue.”

“Scott’s Addition is now zoned for TOD-1, which basically means they want to turn that entire area into 12-floor apartments without matching parking requirements,” he says. “We had to pump the brakes after we told them about the radio tower.”

Another way that WRIR could gain independence, apart from purchasing a new home, is by hosting its own tower.

One of the largest low power FM stations of its kind in the country, WRIR has a tower range of five to seven miles. “[But] given where the wind blows, you can hear us in Oilville, Mechanicsville. We have issues with South Side. If we moved there, we may have much better coverage. Once you get to Hopkins Road, it gets iffy, you start to get a Hampton Roads country station bleeding in.”

In 2007, WRIR relocated its transmitter and antenna to the Richmond Redevelopment and Housing Authority's Frederic A. Fay Towers at 1202 North 1st St. in Gilpin Court. The building now sits mostly empty, according to Vaughn, after its seniors were moved out due to the overhaul of the neighborhood.

“We are at RRHA’s mercy right now with our antenna,” she points out, adding that the station has the money to buy a new home, as well as purchasing and putting up a new tower, the latter of which she estimates would cost in the $30,000 range.

Rafalko points out that whether WRIR can host its own tower often depends on the geography of the space and its surroundings. For example, they looked at a spot in Shockoe Bottom, but it was not favorable to hosting a giant tower.

“If we buy a place in Manchester, it’s an elevated plateau and would broadcast well over downtown and Manchester,” he says. “And there’s a lot of underserved community there, which makes it appeal to us according to our greater mandate of being community-facing.”

How you can help

What is needed from the public is advice, expertise and people-power, the board members say.

“If you have experience moving a lot of servers, or big equipment, we need advice and help – that’s big,” Vaughn says. “Advice on soundproofing; we did it many years ago, but we’d like to know about new technology and what our options are.”

When it comes time to build out, Vaughn says they want to be intentional about working with Richmond-based groups and diverse contractors – from plumbers and electricians to heating, ventilation, and air conditioning.

Rafalko says that, in general, part of being a good business owner is admitting that you “don’t know what you don’t know yet.” He hopes the community will provide valuable feedback that helps them navigate the process and avoid mistakes.

The board of directors meets every other month, every third Thursday at 7 p.m. at WRIR Studios, 1621 W. Broad St., on the second floor. All meetings are open to the public and being with public comment. If you are not able to attend in person, you can request a live chat, according to its website.

Vaughn says the next big WRIR fund drive is in the spring.

“You wouldn’t think a local radio station would be doing better, but we are,” Rafalko says, adding that both their donation amounts and the number of donors have been increasing. “The idea of community has a little bit of diaspora during plague times.And what’s an easy way to still be part of it? Community radio.”

If you want to provide help or give advice to WRIR, the easiest way is to email them at vcpp@wrir.org. Or you can DM them on their Facebook, Instagram, or Twitter.