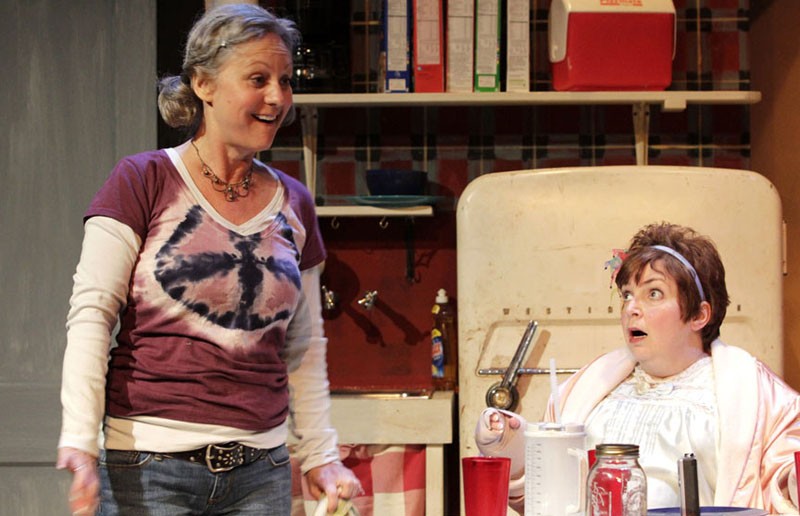 If David Lindsay-Abaire's name sounds familiar to Richmond audiences, it should. In 1997 the playwright's early work, "A Devil Inside," was staged at Barksdale's Theatre Gym by director Anna Senechal (now Anna Johnson).

Lindsay-Abaire and Johnson became close friends when they attended Sarah Lawrence College together. Johnson was best friends with Lindsay-Abaire's future wife. "Anna was the maid of honor at our wedding," he says.

Now Johnson is directing his play "Kimberly Akimbo" in the same space with her Cadence Theatre Company, which is two years old. The show centers on Kimberly Levaco, a 16-year-old with a medical condition that causes her to age four and a half times faster than normal.

"It's really about a teenager contending with all the things teenagers contend with," Lindsay-Abaire says — "first love, a dysfunctional family — but she's also dealing with her own mortality." He got the idea from a friend who'd just had a baby, and compared the child to a wizened 90-year-old woman trapped in an infant's body.

Perhaps Lindsay-Abaire's most well-known work is "Rabbit Hole," which shows a couple dealing with the loss of a child. After becoming a father, he realized that the thing he dreaded most was the idea of losing his son, and decided that fear might make for good theater. The show garnered five Tony nominations, including a best actress win for Cynthia Nixon. It later was staged by the Firehouse Theatre Project in 2009.

But the Tonys weren't all. Lindsay-Abaire received a surprise phone call one morning — he'd won the Pulitzer Prize for drama.

Choosing "Rabbit Hole," caused a bit of a dust-up, as the play hadn't been listed as a nominee beforehand. The prize caught Lindsay-Abaire completely off-guard. "I was totally shocked," he says. "It's indescribable. It's such a great thing."

Then Nicole Kidman approached Lindsay-Abaire to adapt his work for the screen. Kidman gave him her word that he would have final say over the project. "It was a dream process," Lindsay-Abaire says.

Lindsay-Abaire's most recent work is "Good People," a play he wrote based on his upbringing in a working-class, Irish-American neighborhood of Boston. It opened on Broadway earlier this year, earning a Tony for Frances McDormand and a nomination for best play, though it lost out to British transplant, "War Horse."

One distinguishing characteristic of Lindsay-Abaire's work is that his plays usually feature female protagonists.

"Most plays are written for men," he says. "If I can, I make the protagonist female to throw things on the other side of the scale."

Lindsay-Abaire's success only has driven him to be more prolific. He's simultaneously working on two plays and two screenplays. One screenplay is for a remake of the 1982 horror film classic "Poltergeist," produced by "Evil Dead" director Sam Raimi.

The other screenplay is for "Rise of the Guardians," produced by DreamWorks Animation. Pairing Santa Claus, the Easter Bunny and the Tooth Fairy against the Boogeyman, the film is a funny, dark epic about the struggle between hope and despair.

"It's not your run-of-the-mill animated comedy," Lindsay-Abaire says. "What we find out is that they are really this kick-ass team of superheroes, like the X-Men." S

Cadence Theatre Company's "Kimberly Akimbo" plays through Nov. 5 in Theatre Gym at the Empire Theatre, 114 W. Broad St. Tickets cost $26, and can be purchased by phone at 282-2620 or online at barksdalerichmond.org.