Movie Review: “Foxcatcher” tries to pin down the meaning beneath a true crime story. 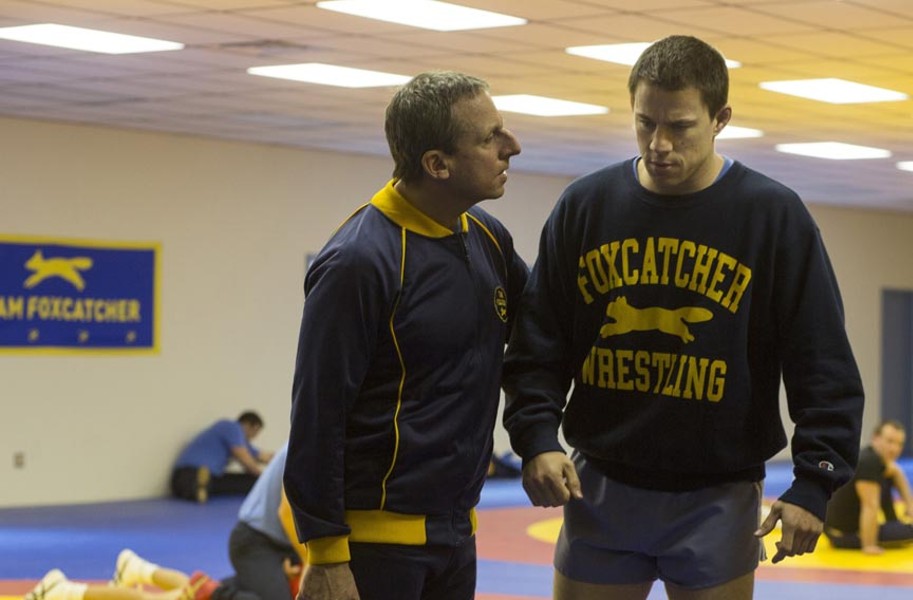 Call me Golden Eagle”: It might be the best line in a film this year, delivered with solemn sincerity by Steve Carell as John Eleuthère du Pont in Bennett Miller’s “Foxcatcher.”

The period drama is mesmerizing in parts and mystifying as a whole — on purpose, I think, to mirror the people it portrays: Olympic wrestler Mark Schultz (Channing Tatum) and his newly self-appointed mentor, du Pont (Carell).

The hallowed grounds they roam (Morven Park in Leesburg stands in for the real DuPont estate) near Valley Forge, also are very much like the film: grand, austere, redolent of history, and yet strangely devoid of all sentiment and charm.

Both the story and its setting combine to form a kind of anti-theme: Everything is stately and meticulous but freaky as all get-out, a carefully staged historical re-creation where we grope blindly through a fog of ambiguity for recognizable feelings, like the inner life of characters a film like this usually would seek out. After reaching the finale, one conclusion is entirely possible: What we expect to find might not be there.

Mark and his elder brother, Dave (Mark Ruffalo), don’t live like we often imagine former Olympic gold medal winners. Dave raises a family by teaching the sport at a local high school, and Mark gives motivational speeches at $20 a pop to fund a shabby one-room apartment while preparing for the 1988 Games. When du Pont asks him to name his price to train at Foxcatcher Farm with his newly minted Team Foxcatcher, Mark asks for $25,000 a year, inspiring chuckles from the audience.

Is “Foxcatcher” a sly black comedy? It’s possible. The film offers its share of those moments. Most center on du Pont, extraordinarily rendered by Carell as something half potentate, half rodent. When speaking, he cocks back his head, narrows his eyes and gazes down a protruding prosthetic nose before baring a set of gruesome denticles. What does he say? Pronouncements so wispy in tone and strange in substance they would get any other man laughed out of the room or socked in the jaw. But du Pont is rich, so people just sit there and listen with a straight face.

Du Pont has many hobbies and obsessions, and, for reasons known only to him, Greco-Roman wrestling ranks high among them. He wants to put a team together, and he wants to make a documentary about it, casting himself as head coach, brother, father figure, mentor and, well, Golden Eagle. The movie doesn’t say du Pont is a crazy, delusional creep, but shows us, and shows us, and shows us some more, until we cry uncle.

Mark, though doomed to sulk through life with little more than a dull beast’s comprehension, also eventually feels that way. His initial excitement is eroded into drug and alcohol abuse and, finally, hopelessness and despair. How would you feel if you had to listen every night to du Pont pontificate on his porch with a glass of scotch like an escaped mental patient who just happens to be a billionaire? And then, while you try to sleep, he taps on your window to join him for midnight wrestling matches! Is this the homo-social friendship du Pont has always wanted but never had, or a homosexual one? The film is opaque on that question, but either way, it’s too weird for Mark to handle.

Dave is brought in to help, but by the time he arrives it’s too late. Mark has gone over to the dark side. The rift isn’t repairable. Reality ensues, and if you know anything about the real people you know it comes to a very bad end.

There are astounding scenes along the way, especially one in which du Pont and Mark, both coked to the gills, give speeches to a group of congressmen in Washington, speeches that say so much about the superficial banality of American life, while saying almost nothing about their own lives. “Foxcatcher” renders its characters with staggering execution, and yet the one thing it’s unable to do is give any insight into them, except maybe to imply by its absence their own lack of personal insight.

“Foxcatcher” is the portrait of a tragedy. But that tragedy might not be the sad and unnecessary true crime that occurred at Foxcatcher Farm in the late 1990s. It might be that our laissez-faire society allows isolation to turn rich and poor alike into disoriented people whose confused actions end up in ruin, and then are completely forgotten unless sensationalized for a moment by the media. “Foxcatcher” doesn’t do that, and what at first feels like a mistake eventually grips you by the throat. (R) 134 min. S