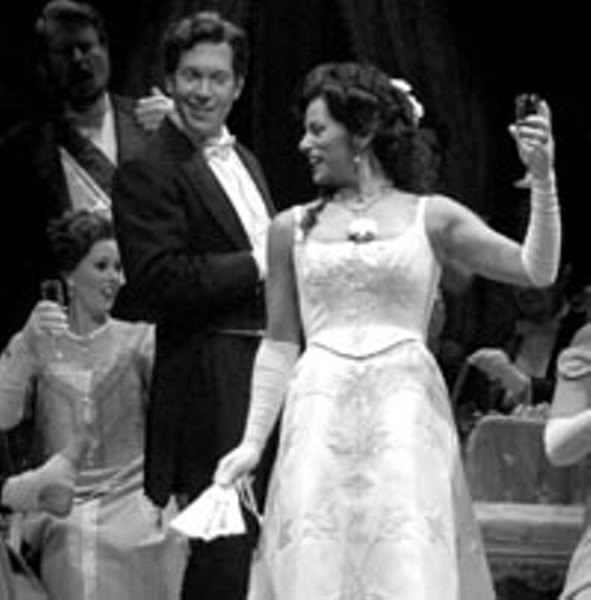 After Soviero's Virginia Opera debut, she went on to win international acclaim from the Metropolitan opera to La Scala. Opera Magazine labeled her "one of the world's great singing actresses." For Nassif, the comparison is a huge compliment and a lot to live up to, but she doesn't seem to notice the pressure. "You can't let it get to you or it can work against you," she says.

Singing opposite Nassif will be tenor Daniel Snyder in the role of Alfredo Germont. To prepare, Snyder, an ex-Marine who has sung for three presidents, is going back to the basics. "I sing the old Italian art songs that helped me develop a bel canto style of singing in the first place," he says. His experience with the Washington Savoyards, a group that performs the operettas of Gilbert and Sullivan, comes in handy too. One of the first things he learned from a fellow baritone there: Don't fidget.

The story of "La Traviata" — the tale of a beautiful courtesan in 19th-century Paris who sacrifices everything in the name of love — is a romantic tragedy. Not surprisingly, drama plays an important role. While the voice betrays the inner mood, according to Snyder, you have to believe in what you're saying and find what's true in order for the drama to come alive. Nassif has the tough task of having to die onstage. She practices by being as organic as she can with her emotions and lets the words help her interpretation.

For her first "La Traviata," Nassif is looking forward to bringing her individuality to the role. One of her goals is to make this performance her "Traviata." If the past holds true, Virginia Opera audiences will embrace individuality.

To prepare, Nassif spent June in White Plains, N.Y., studying with Renata Scotto, a legendary Italian soprano for whom Violetta was a signature role. But it may be her first voice teacher, her mother, who still has the most influence. "I don't have to doubt her compliment or criticism," Nassif says. "She wants what's best. We'll sit down after a performance and discuss."

While audiences have loved Verdi's opera for more than 150 years, for Snyder it's not about getting them to remember his performance versus another as much as it is letting the composer's story come through. "At the end of the opera, they shouldn't know you, but they should know the character you played," he says. "And only then should they ask, 'Man, who was that?'"

If Peter Mark's predictions are correct, we'll probably be asking that question about not only Snyder, but about Nassif as well. S