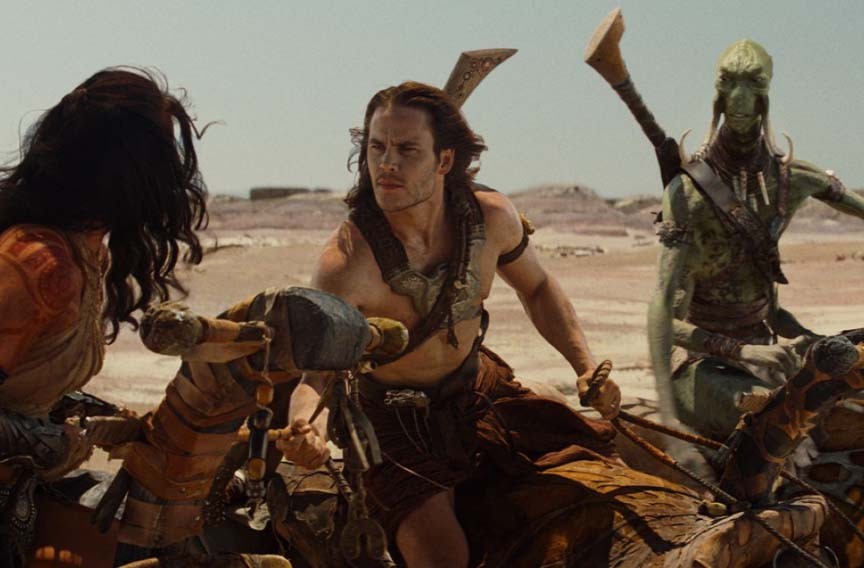 One reason "John Carter" might be two hours and 12 minutes long is that it's two movies, made for two different teenage audiences. One teenager lives in this century and will wonder why the film, about an earthling (Taylor Kitsch) who's accidentally sent to Mars, has so much stuff in it they've never seen before: a back story, pacing, character development and side plots.

The other teenager isn't around anymore, but probably would have enjoyed seeing all the stuff they could only imagine in their beloved science-fiction-adventure books from Edgar Rice Burroughs (creator of "Tarzan") digitally adapted into a big-budget spectacle. Back then they really believed Mars had canals, four-armed green men and flying airships. The older among them fervently believed it had scantily clad, shapely princesses, too.

But I wonder what today's 12- to 15-year-olds believe — besides the timeless need for princesses — and whether they'll care about an adventurer's trip to a planet they now know a lot more about from science class.

The movie isn't bad — it's just sort of old-fashioned, and long. We learn of John Carter's story through his diary, given upon his death, along with a vast estate, to his nephew — who, of course, turns out to be Burroughs (Daryl Sabara). From that diary we learn that Carter (Kitsch), a soldier, adventurer and explorer — the ideal 19th-century man — gets accidentally sent to Mars while looking for a secret cave of gold. There he first falls in with an angry band of those four-armed green monsters, and then with the princess, Dejah Thoris (Lynn Collins), and then with her war.

That's the shortest way to put it, but a lot of other things happen along the way, including the back-story of the princess's people and her enemies, and the much longer story of Carter and those green men. Some of it's integral to character development, and it's actually nice to find when today most films of this type decide that story and character just get in the way of the explosions. But it's too much of a good thing, and some of "John Carter," particularly a lengthy journey to a mystical river to discover something that I doubt anyone in the packed auditorium even understood, could have been left on the cutting-room floor, without anyone but the most avid Burroughs fan left to complain.

Disney based the film on Burroughs' first book, "A Princess of Mars," taking material meant to dazzle the mind of an early-20th-century youngster (Carl Sagan cited the books as an early influence in his "Cosmos" series) and turning it post-modern. The result is something like "Avatar" meets 1912, when John Carter first appeared in a magazine series. Disney timed the release for the centenary of that publication, which is nice and all, but sentimentality doubtful to lure 13-year-olds away from their latest virtual adventure through "Skyrim."

Those who might end up enjoying "John Carter" the most might be a little older, because the best parts, most of them in the beginning, are wrought from the kind of lighthearted spectacle and humors that reminds you less of early-20th-century science fiction and more of Lucas-Spielberg creations made a few decades ago, complete with a John Williams-sounding score. Especially entertaining is Carter's first landing on Mars, where he discovers that something (lower gravity) has turned him into a Superman — even though Superman isn't around yet, able to leap higher than a Barsoomian (that's Martian to you and me) mountain, and kill a Thark (a green man) with one punch. Needless to say, even without those long, dark locks of his, he's vital to the princess's struggle.

"John Carter" was written and directed by Andrew Stanton, who demonstrates the same strengths and weaknesses with storytelling that he did with "Wall-E," beginning well but losing audience patience later on, bogging down in countless names like Tars Tarkas (Willem Dafoe), Helium, the Zodanga and the evil Matai Shang (Mark Strong), leader of the — oh, forget it. All the lingo gets to be way too convoluted, as does the drawn-out ending. Couldn't Carter and the princess have had a simple adventure together somewhere red and secluded? Do contemporary adventures always have to end with an all-out battle for entire planet, even the fourth planet? (PG-13) 132 min. S