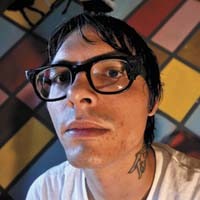 Adam Juresko lives in Oregon Hill, rarely venturing beyond downtown. The Fine Foods there is his border patrol. Going to the Museum District, he says, would be like traveling to Haiti. Carytown? That's like going on a cruise. He doesn't have a driver's license and likes his little world.

But somehow Mountain Dew found him.

Juresko is a collage artist -- he pulls pages out of magazines where he works, 821 Café, and spends hours at the Richmond Public Library. He'll force himself to go down every third aisle, pick up a book, and look for good images to cannibalize. Once he's made a copy of the ones he likes, he'll head down to Kinko's to play.

"The Xerox machine is my muse," he says. He moves images around until he finds an arrangement he likes, cutting and gluing. He pulls images haphazardly, ones that will eventually catch up with him. He hopes to get sued someday. It's like making it.

"It's a really gratifying process for me," he says. "It's also very slow and tedious, which I like. It gets me out of the house; it keeps me out of trouble. Most of the time."

Juresko's work has been featured at NoneSuch Art & Apparel on West Grace Street for most of the summer, and he has painted a cat on 821's storefront, but he's getting out more. He'll be painting Chop Suey Books, and perhaps working on some album art.

He's also one of 12 artists whose work will be featured on Mountain Dew bottles. And now on bottles as close to him as his Fine Foods, there's an image of a cowboy kid with a camera for a face throwing lightning bolts while riding a sort-of deer thing through clouds full of tiger heads.

"I feel really obligated to do what I do," Juresko says.