Special/Signature Issues » Beauty on the Boulevard

Working on a Building 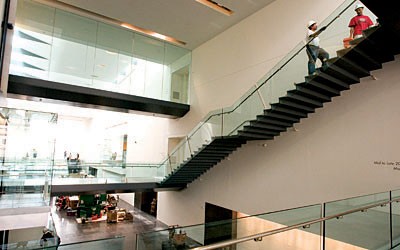 The Virginia Museum of Fine Arts' renovation has a total cost estimated at $204 million, including nearly $157 million for the new McGlothlin Wing. The project's biggest setback occurred when a beam supporting a huge glass window at the new atrium started to fail.

"We wanted to make it much more accessible, so that people could move from one space to another and discover things by serendipity,” says Rick Mather, principal of the London-based Rick Mather Architects, which is overseeing the renovation of the Virginia Museum of Fine Arts along with Richmond-based SMBW Architects.

Estimated at $204 million, including about $157 million for the new McGlothlin Wing, the expansion is among the largest under way in the country. The Cleveland Museum of Art is undergoing a $350 million renovation due for completion in 2013. California's Berkeley Art Museum costs about $143 million, and the North Carolina Art Museum in Raleigh will run about $14 million.

VMFA has forged on through spare state budgets, a severe recession and several delays. The biggest setback was when a beam supporting a huge glass window in a new atrium started to fail, museum director Alex Nyerges says. Fixing it took six months and cost an extra $500,000, which will be borne by subcontractors, he says.

This atrium is the heart and soul of the renovation. The wide, multistory, new interior with glass walls on two sides opens the museum to light, space and people-sized urban scenes such as the Victorian houses on the tree-lined Boulevard and a new sculpture garden in the rear.

That's looking west to east. North to south, the atrium offers three major corridors that penetrate various gallery sections that once were closed off according to when they were built: in 1936, 1954, 1976 and 1985.

With the atrium as a new focal point and entry, art lovers can wander through various sections — Greek and Roman art, the McGlothlin Collection, the Sydney and Frances Lewis collection of modern works, the famous display of FabergAc eggs and other treasures — with much greater ease. There's plenty of space. With the project, some 165,000 square feet of new space will be added to the existing 380,000 square feet.

“The point of the renovation was to be inclusive rather than exclusive,” says Peter Culley, the site director for Mather. “You almost always see natural light and we want to avoid museum fatigue. The original idea was to get lost in the museum. We've been brought in as the doctor and we've brought legibility back.”

Before, visitors needed a map to negotiate the unfriendly traffic. The renovation seeks to remedy that, starting with the north-facing entrance that has separate doors for routine visitors and schoolchildren. The trio of corridors brings a new flow to various exhibits, and a new addition on art of the Americas runs east and west just off the atrium. Also near the entrance and atrium will be special space for traveling exhibits.

A new cafe will offer coffee, sandwiches and drinks in a room decorated with avant garde memorabilia from Best Products, the defunct Richmond retail and catalog company owned by museum benefactor Sydney Lewis. It will have a patio overlooking a new reflecting pond. In the background will be the new E. Claiborne and Lora Robins Sculpture Garden, whose boxwoods and flowers will spread across 3 1/2 acres of what was a parking lot. The Olin Partnership, one of the country's best-known landscape architects, based in Philadelphia, designed the garden.

A new art conservation lab, adorned with giant suction tubes, will serve as a state-of-the-art repair shop for pieces kept at the museum as well as other regional institutions.

Upstairs is a more formal dining room with a bar (museum membership will not be required for admission). Importantly, there's also a new art restoration section replete with suction tubes looming like the legs of giant cockroaches. This will serve as a repair shop for art kept at the museum as well as for other regional galleries.

Rick Mather Architects was chosen as the renovation designer in 2001 after an international search. The firm has broad experience in renovating galleries and museums such as the Galleria Sabauda in Turin, Italy, and the National Maritime Museum in Greenwich, just outside of London, says Mather, an American.

The Mather renovation job that's most like the Virginia museum is the Ashmolean Gallery at Oxford University, a famed institution that was started in 1683 and is the oldest public museum in Britain. Like VMFA, the six-story Ashmolean building, constructed in 1845, was chopped up in compartments with a hodgepodge of art collections. There, as in Richmond, Mather opened up the Ashmolean with a new entrance and connected passageways that contain more light. The Oxford project, begun in 1999, was finished in November.

Both projects used the same subcontractor, London-based Atelier Ten, which installed an innovative climate-control system in Richmond. Typically, heating and air-conditioning blasts air at the top of rooms. The newer system pumps cool air from floor units, which rises and warms as it passes the bodies of visitors. Doing so saves money.

The most important new pieces of technology, however, are the glass walls at either ends of the atrium. On the Boulevard side, one solid piece of glass stretches 70 feet by 40 feet and will be the largest unsupported glass wall in North America. Custom-made by Eckerct in Austria, the glass is a special type that is clearer and has less glare than standard glass.

Other new features are special recessed interior lighting by Labervertoire of New York and collapsible, cushion bleacher seats for a lecture hall made by, coincidentally, a British company in Oxford.

SMBW Architects is the architect of record and helped with design at every stage. Mather would come up with ideas and SMBW would see how realistic they were and if they met city codes. “It's gone all right,” says Lou Wolf, a principal at SMBW.

What made such an ambitious project a go in a middle-sized city was a stunning fundraising campaign that collected $193 million, exceeding its $150 million goal. “You'd never collect that amount of money in London,” Culley says.

Beauty on the Boulevard