This downtown spot is the place to be at lunchtime — just try to get there before the line. 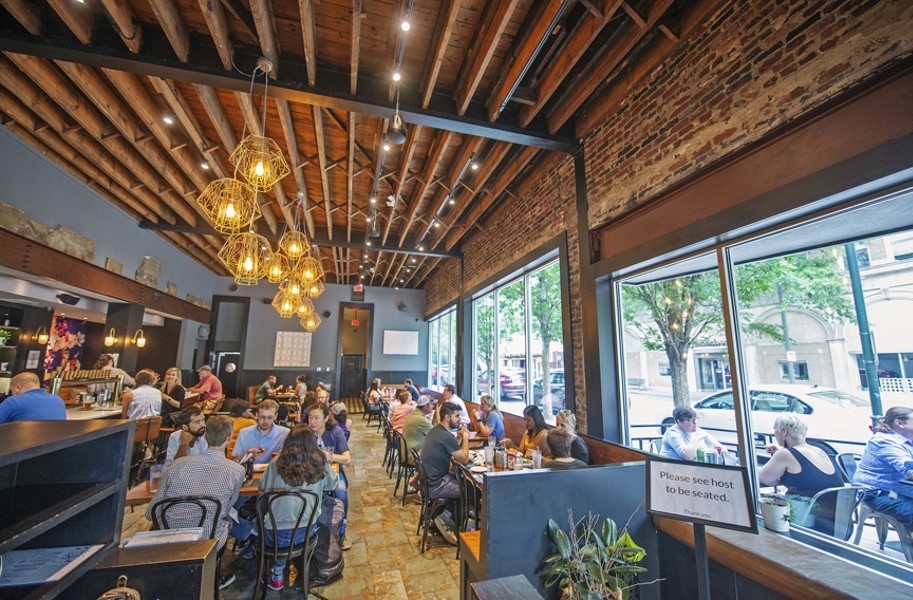 A cousin to the original outpost in Fayetteville, West Virginia, Secret Sandwich Society arrived on Grace Street in 2016. Its shtick revolves around hot sandwiches named after presidents and salads named for first ladies. Outside of some well-branded merch, the theme seems to end here. Cuisine aligns with the popular new-age brand of Southern cooking that hypes bacon jam, pimento cheese and house-made pickles. It appears to be more than just hype, though, and judging by the crowds, the secret is out.

After persevering to procure a parking space — $3 for two hours — walk into Secret Sandwich Society and if you arrive after noon, there will be a wait from 10 minutes to half an hour. The bar of more than a dozen seats is usually full as well. Decor is modern yet comfy, with trendy leather chairs at the bar, industrial chandeliers hanging from the ceiling and muted slate floors.

Though it’s squarely located downtown and attracts ravenous wanderers from the adjacent arts and financial districts, many of your fellow diners will be tourists. Secret Sandwich Society has quietly established itself as the safe, savory choice for visitors, with fair prices and familiar comforts. I haven’t witnessed as many droves of people in matching T-shirts and lanyards at any other restaurant within a couple blocks. Yelp, everyman’s online stamp of approval, lists pages and pages of exceptionally glowing reviews. 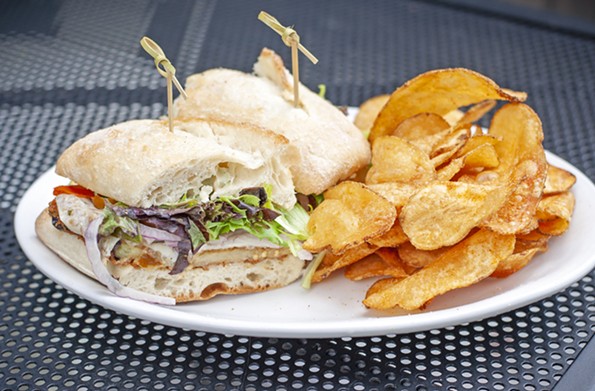 Save for a few starters (hot wings! Brussels sprouts!), the menu is focused on the presidents, first ladies and several colossal burgers. Sandwiches are packed with generous portions of fresh ingredients. A buttery sheen seems to glimmer on each sandwich bun that whiz by on its way to tables. All sandwiches come with house-made chips, thick cut and salty. Shoestring french fries are available for an extra $3, or pimento cheese fries for $3. Not feeling fried potatoes? Ask about the soup of the day. During one visit, the coconut curry cauliflower soup was the highlight of my meal. A simple and familiar dish, it was creamy and rich with a kick. The riced cauliflower made it all the more filling to send me into a productive afternoon.

The President Hoover serves up a classically golden fried chicken breast with Swiss cheese, honey butter and house-made pickles ($12.50). Picky or particular eaters will find solace in the President Lincoln, a choose-your-own-adventure-style sub ($11.50) with a choice of turkey, ham or pastrami, four cheeses, veggies, spreads and four types of bread. The spiced meatloaf on thin sourdough toast on President McKinley’s sandwich ($11.5) is dense and flavorful, but feels too gluttonous and heavy for a weekday lunch.

At a March midday meal (and admittedly, many times since the restaurant has opened), I’ve ordered and loved the President Taft sandwich ($11), composed of juicy pulled pork with a bed of sauteed vinegar kale and rosemary mayo tucked in the crevice of a soft baguette. I returned in early April to discover a refreshed menu, with Presidents Taft and John Quincy Adams sadly eliminated from the printed page in front of me. President Jefferson, ironically the only Virginian on the menu, has quizzically been kicked out of the club. Next time, in place of President Taft, I’ll consider President Kennedy, which pairs the same slow roasted pork shoulder with ham and Swiss.

Service is friendly and frank. If you can snag a seat at the bar, your meal will move a touch faster.

Even during a rush with many large parties, wait staff prioritize getting orders out as quickly as possible. On both visits, I managed to get in and out in about 90 minutes, including a wait time. If you’re able to beat the line, you can make it a true hour lunch.

A one-on-one meeting could easily play out well here, but with a larger group, it gets a little chaotic. Secret Sandwich Society seems to be a more apt choice for a work celebration after the job gets done. The place is still bumpin’ after 2 p.m. on a Friday, and most people don’t seem to be returning to the office.

It remains unclear whether the ingredients in a sandwich correspond to the president for which it is named. Did President Truman prefer turkey? Did President Van Buren enjoy pastrami and sauerkraut? Was President Fillmore a vegetarian? Maybe it’s all part of the intrigue.