A new exhibit at the Black History Museum and Cultural Center delves into the history of Thomas Jefferson’s many slaves. 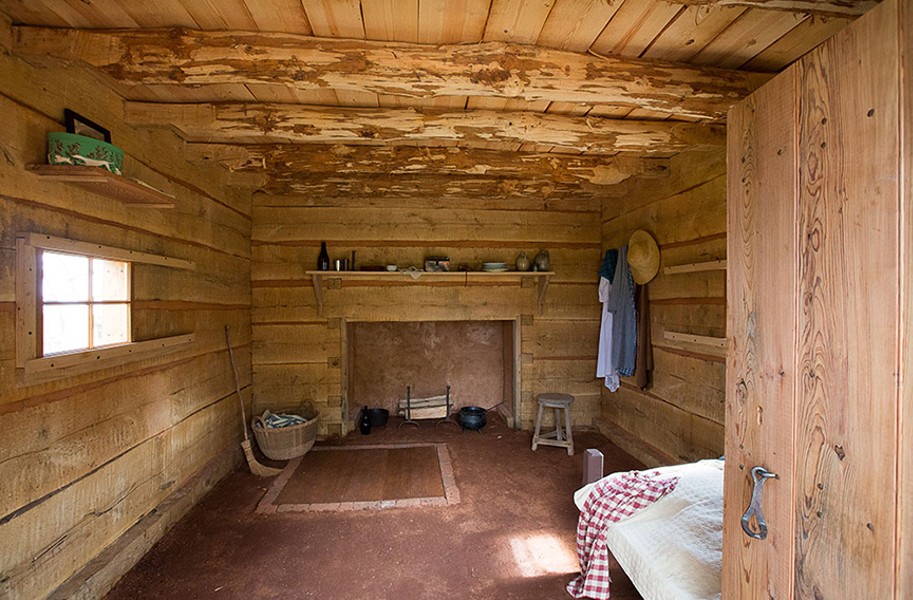 A re-creation of Sally Hemings’ quarters. Hemings was Thomas Jefferson’s domestic maid and concubine whose story is told in the exhibit, “Paradox of Liberty: Slavery at Jefferson’s Monticello.”

Of the myriad reasons that Sally Hemings should figure prominently in American history books, there is perhaps none so compelling as the treaty she negotiated with Thomas Jefferson in Paris.

After the 41-year-old widower received a diplomatic appointment to Paris in 1784, he sent for his daughter Maria, who was accompanied by the 14-year-old Hemings in the role of domestic servant and maid in Jefferson’s Parisian household. Paris had a large free black population and once there, Hemings was legally free. It was during the time in France that the teenage Hemings became Jefferson’s concubine, as she came to be labeled.

When Jefferson’s appointment as minister plenipotentiary to France ended, he prepared to return to Virginia but Hemings had no reason to leave a place where she lived as a free woman to return to enslavement. Refusing to go, Hemings held all the bargaining chips and, through strength of character, negotiated an agreement that ensured freedom for any future children they had, as well as extraordinary privileges for her at Monticello. She returned to Virginia pregnant with Jefferson’s child.

Sally Hemings’ story is just one of the fascinating sagas on display at the Black History Museum’s new exhibit “Paradox of Liberty: Slavery at Jefferson’s Monticello.” The title nods to Jefferson, a man who drafted the Declaration of Independence and called slavery an abominable crime, yet was a lifelong slaveholder. The exhibition focuses on six enslaved families at Monticello, with extensive family trees on display for each. Several of the extended families lived in slavery at Monticello for three or more generations.

Using artifacts belonging to enslaved people that have since been excavated at Monticello, the exhibition provides a deep dive into their lives. Always living beyond his means, Jefferson established a nailery on site as a way of making extra money. Enslaved boys ages 10 to 16 worked there, with Jefferson measuring their daily productivity by weighing the nail rod at the start of the day and the completed nails at the end. Each of these children swung a hammer about 20,000 times a day in order to produce 10 pounds of nails daily. A 10-pound bucket of nails sits nearby to help visitors get a sense of the labor expended by the boys.

“This exhibit tells the story through the eyes of the enslaved people who built and maintained Monticello,” explains Adele Johnson, the museum’s executive director. “Telling a truthful history is one of the things the museum wants to promote, even when it’s painful and difficult.”

Throughout the exhibit are issue boards asking tough questions: Would you run away if you were enslaved on a plantation? How would our nation be different if the race of enslaved children had been determined by paternity? Could there be such a thing as a good slave master?

Because the exhibition raises so many issues central to the state of race in the U.S. in 2020, the Black History Museum has planned extensive programming to generate community conversations. Two descendants of Hemings and Jefferson, one white, one black, will speak March 14 and there will be a panel of descendants speaking April 11. Every Saturday in March from 11 a.m. to 3 p.m., the museum holds Hands-On History events where visitors can hold artifacts such as shackles. Because the exhibit is likely to spur interest in family trees, a genealogy workshop is scheduled March 21.

A video in the exhibition looks at Hemings’ life through the recollection of her son Madison who recalled, “It was her duty, all her life which I can remember, up to the time of father’s death, to take care of his chamber and wardrobe, look after us children and do such light work as sewing.” Part of her deal with Jefferson was that she would never work in the fields.

In addition to the first child Hemings had with Jefferson, who died not long after birth, she went on to have five more with him, with four surviving to adulthood. Decades after their agreement, Jefferson freed all of his and Hemings’ children. Beverly and Harriet left Monticello in the early 1820s when they turned 21 while Madison and Eston were freed in his will, departing Monticello in 1826. Tellingly, Jefferson didn’t grant freedom to any other enslaved family unit.

Besides providing a more in-depth look at the lives of enslaved people than most people have likely seen, “Paradox of Liberty” makes a strong case for Sally Hemings’ story to be in the history books. And not just as a concubine, but as an enslaved woman who, at the tender age of 16, negotiated with one of the most powerful men in the new nation to ensure the freedom of her future children and to improve her own living conditions.

The exhibition is particularly notable for how it rounds out the Jefferson myth without demonizing him. Explains visitor services manager Mary Lauderdale, “You don’t have to deliberately bash somebody, you just have to tell the story truthfully.”