Language is a main draw in Quill Theatre’s existential “Rosencrantz and Guildenstern Are Dead.” 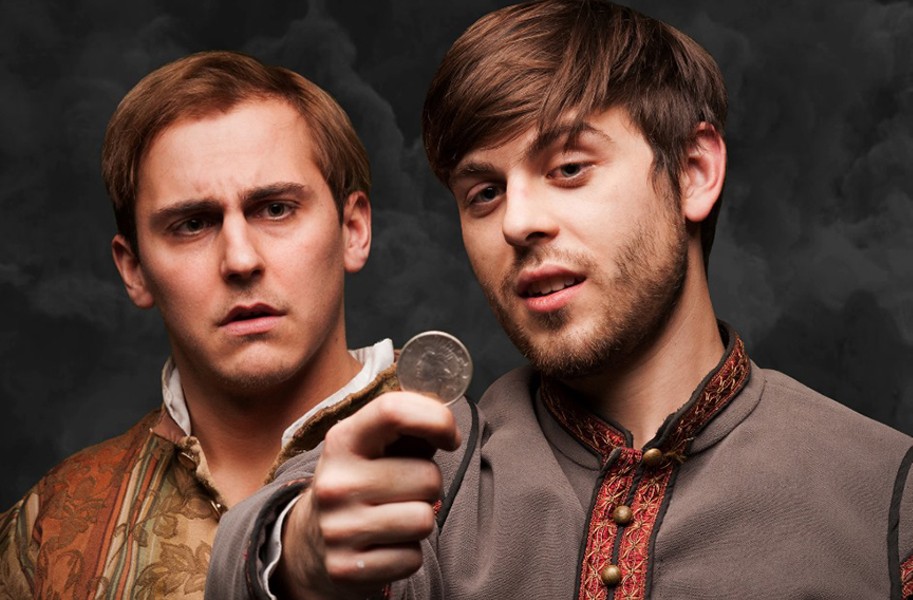 Adam Turck as Guildenstern and Tyler Stevens as Rosencrantz in a play that chronicles the actions offstage in the world of Shakespeare’s “Hamlet.”

‘They’re basically just cogs in the wheel of the ‘Hamlet’ storyline,’ says James Ricks, director of the Quill production, opening Jan. 24 at the Dominion Energy Center’s Gottwald Playhouse. “Like characters in an absurdist play, they don’t really know what their purpose is or why they are there.”

“Tom Stoppard has the amazing ability to be funny and light-hearted while tackling remarkably heavy existential thoughts,” says Tyler Stevens, who plays Rosencrantz in this production.

“On the very surface, it’s a meanwhile story,” adds Adam Turck, who plays Guildenstern. “Stoppard’s play chronicles their actions in the offstage world of ‘Hamlet,’ but he uses this admittedly kitschy concept as a platform to explore profound existential questions of memory, truth, purpose, death and even language itself.”

Language itself seems to be the big draw, and perhaps also the biggest challenge for the performers involved in this production. Heavy analysis of Stoppard’s text, which Turck describes as “a linguistic puzzle about words themselves,” has been an important part of the cast’s preparation for this show.

“He uses words so playfully and taunts his characters with double-entendres, mixed metaphors, similes, dual meanings,” says Joe Pabst, who plays a character known simply as the Player in this show, head of an acting troupe that also factors into the plot of “Hamlet.”

Pabst says that he’s been waiting for an opportunity to bring this show to the stage since college, when he says he fell in love with it. “It’s both morbid and hilarious,” he says, adding that “it’s really as timeless as any Shakespeare work. The themes and humor remain relevant.”

Ricks, too, says he’s been a longtime fan of Stoppard’s.

“My weakness for Shakespeare, complex wordplay and the existential definitely checks all my boxes,” he says, adding that “it was also the first play that confirmed in my mind that theater is exactly what I wanted to pursue.”

This is clearly the kind of play that will appeal to theater people who revel in metatextuality and rampant wordplay, those who bring with them some prior knowledge of Shakespeare and absurdism. But the cast says that anyone can enjoy this show, which Stevens says has universal appeal because “We all exist.”

“Putting aside this play’s well-earned status as a classic in the dramatic lexicon, as well as the layered, profound questions it explores, this is a very silly play,” Turck says.

“Anyone who likes buddy comedies will enjoy this,” Pabst adds.

“You don’t have to know the play ‘Hamlet’ or the tenets of absurdist theater to enjoy this show, but it certainly will enrich your experience if you have,” Ricks says. “He’s written it in such a way that I think will perhaps incite audiences to check out the materials he so expertly draws from. It’s also just a damn funny play.”