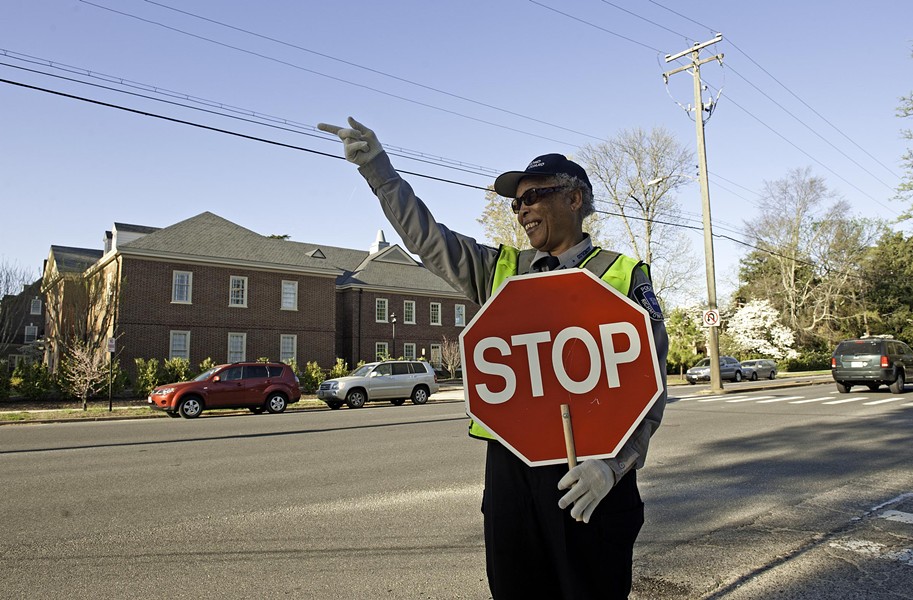 "We are Richmond police school crossing guards so we are employees of the Police Department but affiliated with the Richmond Public Schools. There used to be 48 crossing guards years ago, but they winnowed them down after they started closing schools and integrating and stuff, so now we're down to 13.

"The way I see it, the children I cross at St. Catherine's and, after that, at Mary Munford Elementary, are my children from 7 o'clock to 9 o'clock. I'm like a mother type. I have to do my best to protect my children like I would do my own.

"Just the other morning at St. Catherine's, a motorist was coming up and he wouldn't stop. I stopped him and I told him, 'Sir, my children come first,' because I had the little, teeny, tiny ones. He thought he could just creep by me and turn, but when my teeny babies come out, no one moves. You're gonna stop until they get across. This lady saw this and she honked and she thanked me and said: "That brought tears to my eyes. I like what you said, your kids come first."

"I don't let my guard down when I'm crossing because every motorist has a different personality, different attitudes. Some are trying to get to work. Some of 'em have a hangover or something. Some are not paying attention. They're on their phones. They are trying to get from point A to point B. We have motorists who will try you — oh, they will try you — but with me, you better stop 'cause you don't want me coming over. But I don't argue because it's a bad judgment against me. I try to control my temper.

"See, I'm like an umbrella. I spread out and everything around me is sealed. I'm in control and that took time to learn. In 37 years I have been struck but twice, and I wasn't hurt. I pray to God every morning that I can do what I have to do.

"Everybody has their own style. I've developed mine, my way. I just try to move to the beat. I have music in my bones. And like Janet Jackson said, "I'm in total control." I just take it from there and go with the emotion. I just go with the flow."