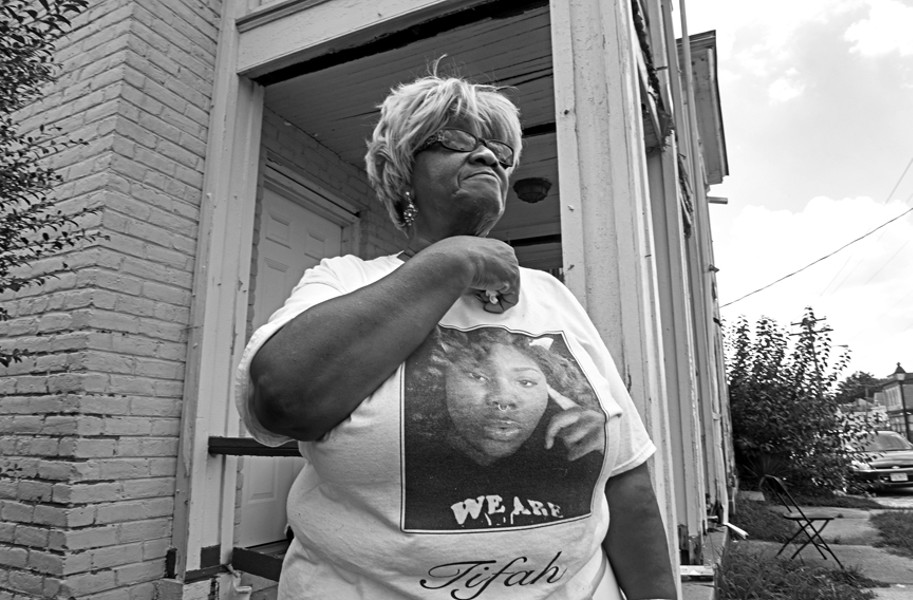 This guy, I don't understand why he did this, he put the gun to her chest and pulled the trigger. He jumped out of the car she was in and he ran. He told the police he thought the gun was unloaded. But still, why would you even put an unloaded gun to somebody's chest and pull the trigger?

I think it was because he said he was her boyfriend, but he wasn't. She told him, "I don't want you, you ain't about nothin' and I got a boyfriend." That's why he pulled that trigger.

He didn't get but nine years. He's not going in there to find Jesus or get a GED, he's getting all those suspended years. Twenty to 40 years. When he's on probation, he's got to tow the line. I just wish these young guys didn't pick up a gun. What is it going to do? You pull the trigger and kill somebody when you're mad, what does that do for you? You're doing something that I thought had stopped a long time ago. It's genocide. You're killing us. We don't have any young men to protect the neighborhoods anymore. I don't know. I don't know what to do.

She was honored at the Siegel Center for her graduation. Her mother walked across the stage to get her diploma and that place erupted. They had her pictures up on the Jumbotron and afterward her friends had these red big balloons and came out in front of the Siegel Center and turned them loose. And then when she got her cosmetology license they honored her at the fairgrounds. She was loved — she was loved.

She has friends that still come by and they touch the urn and kiss it. They've got me on medicine so I can function. I can talk about her now. But before you would have to pick me up off the ground. This was her time. All of us have to go. Eighteen years, 19 days and so many hours. But Lordy, it hurts so bad. She left a legacy. She left people that loved her. She wasn't doing anything wrong. She wasn't out here in the street, running off to clubs. She didn't do that. She was our baby. Our Tifah.

She said, "Oh Grandma, you are going to make me cry."

She got up and cried and sat in my lap and we hugged each other. And that was in February.

These people that pull these triggers, they need to know the aftermath. They need to know what you do to the families. Look at the ramifications. I just hope that somebody, before they pick the gun up, they think, "What's going to happen after this?" — as told to Scott Elmquist