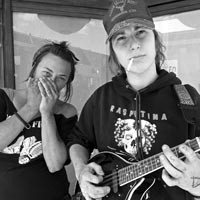 I had come through here a couple years ago. I got dropped off by my ex-boyfriend this time. I kind of told him to leave me here because I wasn't about to go freeze in Colorado for the winter. So I stayed on my friend's sofa for a month and then looked everywhere for a job. I couldn't find one anywhere and then I started working at Club Velvet.

That was, well, it was kind of soul-draining and a little amusing at times; there were some quite hilarious incidents in there. One of my friends and I enjoyed doing the cha cha slide across the stage while no one else was in there, or dancing to “Jailhouse Rock” when there were no customers in there whatsoever.

I quit, though, because I don't really like the overlord. It was not my gig so I retired. I've just been playing mandolin in Carytown because it's a lot more fun. I don't have to listen to Li'l Wayne. But I'm probably going to be going to Nashville at the end of May. I paid my rent through the end of May, but I don't have any more money and I don't think I can make rent playing mandolin, so I'll just go somewhere else.

My friend Abby lives there and I traveled with her, and JoJo knows her and we all love her and she lives there now and pays rent from playing the spoons. You can make a lot of money busking in Nashville.

I got this hat from a yard sale in Raleigh for 50 cents because the cops stole my hat and threw it away in Pittsburgh. So I put his hat on my head and kept it there and ever since then everybody's called me Hank, because it said Hank on the hat.

I had a guitar — I've been playing guitar for like 8 years — and it got stolen so I got a mandolin because they're smaller and easier to carry around and the scales kind of make more sense. I play a lot of traditional Irish music, and a couple of punk rock songs and one Marilyn Manson song.

This was kind of an attempt to settle down. And I guess I could go back to work at Club Velvet since having discovered that I can work there, not really do anything and make a ton of money, I'm probably going to be too lazy to ever do anything else. I like it here — I'd like to stay here — but I could go somewhere else, too. There's so many other things to do!

I was thinking about perhaps doing wild land firefighting in Oregon this summer with my high-school sweetheart [from Mormon boarding school]. I went to Catholic school before that. My dog's name is Frankie after St. Francis, patron saint of animals.

Something I've been thinking about on and off, when I'm thinking about settling down is it'd be really sweet to build like a huge tree house in one of those giant trees up in Hollywood Cemetery and just live there.