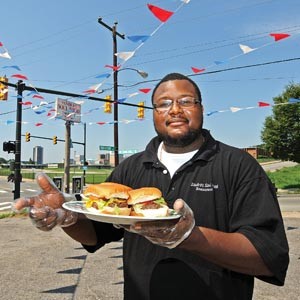 We get people from Washington, N.C., all over the place who have heard about it. It's very rare to find a homemade burger that is made from scratch by hand. You always get the frozen patties or McDonald's or something like that. We try to keep it like home. It's a lot of work and you have to be dedicated and you have to love what you're doing. And it's a family thing. My grandmother started it and my father kept it going. We have been here for 15 years. I plan to keep it going as long as I can, with the help of my brothers.

We were trying to think, what could we do to boost business and we were also trying to campaign for Obama during the election. That's when we came up with the 99-cent Obama burger. We made a promise if he won we would keep the burger forever. It is still our best seller. We still have faith in Obama but things were so messed up when he took office. It would be hard for anybody to change things that quickly. Hopefully he will turn things around and run again and be re-elected. We can only hope. He has been getting a hard time from Republicans and the some of the media but that's natural, that's gonna come regardless. But I think he is strong enough, like us, to fight through this recession.

I think Sandra's is big to the community. This is an impoverished neighborhood but we have never had any trouble because we treat everybody like family. A lot of the kids here have grown up on our food. People call me brother or my father, pop. A lot of young people look up to us, like me being such a young guy and they see what I am doing and they become motivated to do things on their own. I try to talk to them to them, especially through church groups. We donate things to the school occasionally and donate our services. We can't help everybody but we try to help those who are willing to take it.

My grandmother, she has been cooking her whole life, she started in Selma, Ala., during the Martin Luther King days. After she migrated to Connecticut after her kids got a little older, she started teaching them how to cook and decided to open a restaurant. My father and aunts and uncles would watch everything she was doing and the process took years, until they learned for themselves and opened their own businesses. She was able to retire. Now she is just so proud. She just started in her kitchen and now her kids own restaurants. I think that is what keeps her going.