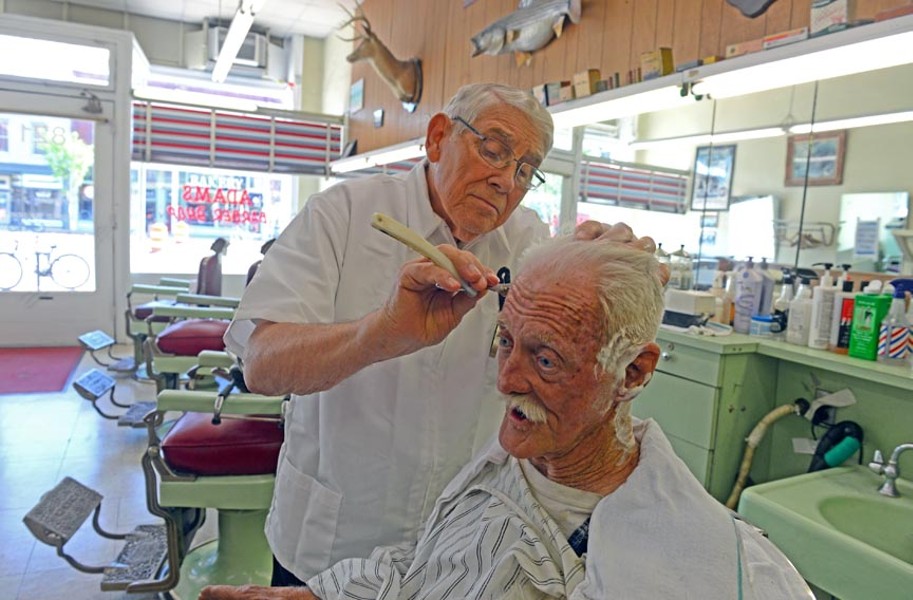 "As of this May I’ve been cutting hair here for 59 years.

"I came off my Daddy’s tobacco farm in Amelia County and went to barber school at 721 W. Broad St. I lived at 820 W. Grace St. in a boarding house with a lot of guys from the school. We never locked the doors. Then I went to work at Hall’s Barber Shop here at 821 W. Broad St. There were four barbers working then. It specialized in flattops. That’s why I got hired. Mr. Hall took me to a [flattop] competition at the John Marshall Hotel and I won first place in the state.

"When I came here, Forest Hall said if I’d work for him for 10 years, I could have the shop. When he turned 65 I paid him for it and went downtown and changed the name to Adams Barber Shop.

"Back then there were five automobile dealers within two blocks of here including Universal Ford, Murray Oldsmobile and Mad Man Dapper Dan’s used car lot. There was a union hall at Broad and Laurel. At lunchtime all of us went to Jimmy’s restaurant which was in the Richmond Glass Co. building [now the Depot building at Virginia Commonwealth University]. They served three meals a day. At Chelf’s Drugstore on Grace at Shafer, breakfasts were great — they’d do eggs any way you wanted them.

"There’s not been as much change in hairstyles over the years as you might think. The guys are still wearing it short, but now they like it real short. When the Beatles started the long-hair thing, I still did mighty well. I still cut seven or eight flattops a day.

"I’m going to work until next May and then try to sell the shop. If somebody buys it, I’ll help. If not, I’m going to get out of the business after 60 years."