Word and Image: How Richmond Acquired ‘Rumors of War’

Pamela Royall discusses how her family’s relationship with Kehinde Wiley helped bring a major work to the Virginia Museum of Fine Arts.

Editor's note: Civic leader and art collector Pam Royall and her husband William were instrumental in securing "Rumors of War," the major sculpture by American artist Kehinde Wiley, which will be publicly unveiled at its permanent installation in front of VMFA on Tuesday, Dec. 10 at 3:30 p.m. Style arts writer Amanda Dalla Villa Adams recently sat down with Pam Royall to hear how the piece made its way to Richmond.

Pamela Royall: When Kehinde was here three years ago, when we had his exhibition at VMFA, Bill [Royall] and I hosted him and his entourage at [Try-Me Gallery] and a lot of local art people were there as well. Bill had a chance to host Kehinde [and] they went to our home in Gloucester. They went fishing.

We had purchased his work in the past, four or five of his pieces, and we’ve been big supporters of him. … We have enough of a personal relationship that he kind of hinted to Bill that, while he was here three years ago. … He was being inspired by the monuments on Monument Avenue, and he was working on a project.

So, fast forward a couple of years, and Bill said, “What’s going on with that project, Kehinde?” He said, “Well, contact my gallery.” [We approached Sean Kelly Gallery] early last spring. There were sketches and I think before it moved [into] the fabrication phase, they wanted to have a commitment because it is a $1 million-plus piece and it was fabricated in China. What we got excited about were the sketches that Kehinde had done. … 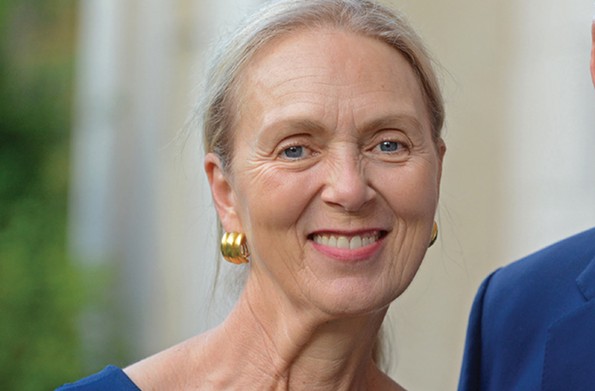 Sean Kelly is also a good friend of ours through the art world. When we expressed an interest in knowing more about the sculpture, it was really super, super secret. We both said to Sean that “It absolutely should be in Richmond, Virginia.”

We understood that one piece was in production and they were maybe going to make one or two others at some future date, but we said No. 1 should really come to Richmond. … Bill and I said personally we would make sure that, either we provided funds or we’d help fundraise, so that it could be [here]. We got not only Alex Nyerges but also Michael Taylor and Valerie Cassel Oliver involved in conversations with the gallery. …

But I think the most significant thing that happened is when the museum said this is something we want to do at a board meeting [in May 2019]. Bill stood up and told everybody, “This is our moment. This is the right place, the right time and the right thing to do” and he said “Pam and I are going to support this” and for our family the idea that we would have our name associated with something of this significance at this time in Richmond was really important to us. Really, in typical direct-marketer fashion, [he] gave everybody else a call to action: “Do you want to be associated with this important moment in the history of Richmond, Virginia?” And numerous … board members and extended family members of the VMFA said “Absolutely, I want to be part of it.”

The museum made a commitment that they were going to buy it. The board voted at that meeting that the museum would acquire the piece. I know in other press coverage it’s been stated that the museum commissioned the piece, but it is absolutely inaccurate and inappropriate because the artist made the piece and it was the artist’s idea to make the piece. … It was purchased by the VMFA. I think it’s significant enough that the VMFA bought it, but I’m offended by the notion that it has been stated that it was commissioned because the piece was already being manufactured when the museum stepped in. …

“I didn’t think it was necessary [to put it on Monument Avenue]. I think its proximity to Monument Avenue is significant. We have decided to leave that to a different group of people to figure out what should happen with Monument Avenue. I know that Bill drove Sean Kelly around Richmond and looked at potential places for it. We had a conversation with a friend of ours who said, “Oh, it should be down on the river. It should be down in the Shockoe Bottom area.”

I’m on the board of the Virginia Historical Society and if the VMFA had not said that they were in on making it happen, I would’ve approached our president at the Virginia Museum of History & Culture because I wanted it to be there. I thought the Boulevard-Monument intersection is so significant and the things that are happening to draw larger and larger audiences to both the Virginia Museum of History & Culture and the VMFA is really powerful in this moment. And I think it has been a turning point for both institutions in appealing to a much more expansive and diverse audience.

I’m inspired by the fact that it will continue a conversation. … I would like, like so many Richmonders, for people to look at the city differently than what they may have thought of it in the past. We’re not the same Richmond that we were five years ago much less decades ago. I think we’re still being judged by our history from which we’ve moved forward in very significant ways.

The unveiling of the Kehinde Wiley’s “Rumors of War” takes place on Tuesday, Dec. 10, in front of the Virginia Museum of Fine Arts at 3:30 p.m. Open to the public.