Characters look for love while Richmond Shakespeare pursues a new legacy with "The Merry Wives of Windsor." 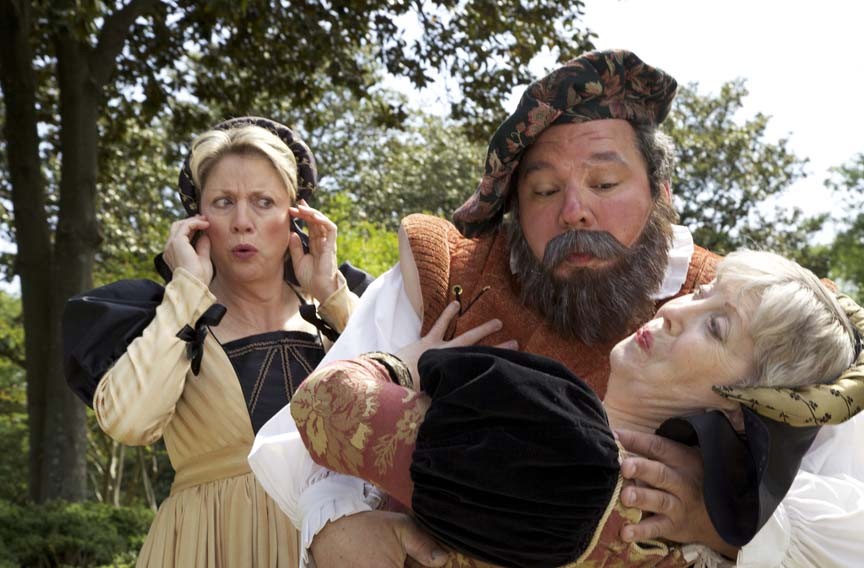 One of the most endearing qualities of Richmond Shakespeare under former Artistic Director Grant Mudge was the company's willingness to stretch the Bard's work in intriguing and entertaining directions. This adventurousness was exemplified by its production of "The Merry Wives of Windsor (Farms)" some nine summers ago, in which one of Shakespeare's most freewheeling comedies was expanded to skewer aspects of Richmond society.

It's still too early to judge the interim artistic director, Jan Powell. As a director, she brought a bracing, stripped-down esthetic to winter's "Macbeth." The first Shakespeare Festival offering this summer, "Cymbeline," got decidedly mixed reviews. While the production of "The Merry Wives of Windsor," directed by Shirley Kagan, suffers in comparison to the Mudge-era production, it still makes for a fun night at the theater and shows sparks of promise for the future.

Kagan chose her Falstaff well, Schall-Vess having an expansive midsection and a glorious, gravelly voice that adds gravitas to Falstaff's whining. It's also a kick to watch veteran actresses Liffick and Price take palpable delight in their scheming. Given the slapsticky nature of the play, the production works best when the actors push their characters to the edge of farce. The dashing Evan Nasteff chews scenery with abandon as French Dr. Caius, and Turner's Mistress Quickly nearly chirps with joy while the plot machinations play out.

There are hitches along the way. Simmons makes a fine Anne, but it's difficult to care who wins her hand, particularly because the ultimate victor seems obvious from the start. The denouement of a subplot in which revenge is visited upon the Host of the Garter Inn (Thomas Bell) is indecipherable to this critic. And while Virginia McConnell's costumes are good and period-appropriate, Falstaff's frock is distractingly ill-fitting.

These glitches sometimes keep the comedy from reaching full frolic, but there are still laughs aplenty, making "Merry Wives" an entertaining diversion for a warm midsummer's night. S

"The Merry Wives of Windsor" plays at Agecroft Hall, running Thursdays through Sundays at 8 p.m. through July 29. Call 866-BARDTIX or go to richmondshakespeare.com for tickets and information.