The Richmond Mural Project begins a five-year plan to make Richmond the capital of lowbrow art. 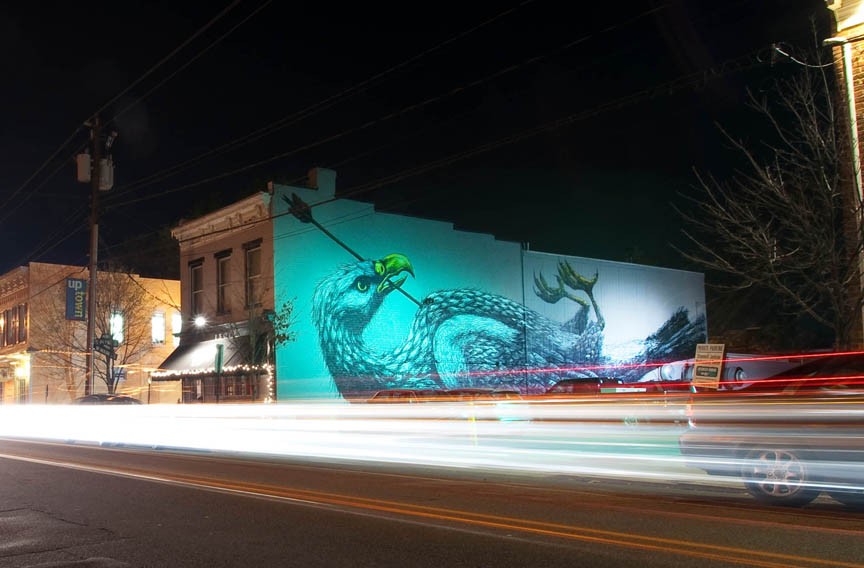 "As soon as we walked out on Broad Street," Pomajambo says, "I really fell in love with Richmond, with the walls, with the people."

It seems there's no need for him to say goodbye. Pomajambo will return next month for the Richmond Mural Project, an independent spinoff of the G40. If all goes as planned, this five-year initiative will produce 100 murals on buildings across the city. "It would add another dimension to what is already an amazing art town," Pomajambo says.

The project isn't the only one aiming to brighten Richmond's walls — 1st District Councilman Jon Baliles and local muralist Ed Trask are working on details of the Richmond Street Art Festival in September, which will bring muralists to paint the walls of a massive old bus depot on Cary Street.

During the past few months, Pomajambo has worked with various business and property owners to pick walls. In March, the Commission of Architectural Review approved his applications for four murals in historic districts, including one on the Downtown YMCA at 2 W. Franklin St.

Pomajambo sees it as a win-win situation for muralists and business owners: The muralists get giant canvases, and the art helps attract people to the areas where the businesses are located. Designing the murals often is a collaborative process between muralist and property holder. Gaia's striking mural of hands holding two doves, which stretches across the western façade of the HomeAgain temporary shelter at 11 W. Grace St., is one of the best examples of this process.

"Originally the designers had wanted to use pigeons," says the executive director of HomeAgain, Katie Choan. But after conversation with the nonprofit, "we ended up replacing the pigeons with doves — we felt like it was a better symbol of what we do."

Choan says the shelter's mural has gotten a lot of positive feedback. "It really was about community involvement and a way to make that space look better," she says. "I like the idea that the building is part of something bigger in the city."

Because Pomajambo sees the Richmond Mural Project as fundamentally community-oriented, he intends to pay for it using a variety of sources, including a month-long Kickstarter campaign with a goal to raise $36,000. The money will go toward bringing the artists to the city.

"We're reaching out to everybody — to corporate, to city, to private funding," he says. "But I think that if, at the end of the day, we can fund this project through the people of Richmond, it makes the project even better."

Although the project may be firmly rooted here, Pomajambo hopes its impact will be international. "The mission of the Richmond Mural Project is to put the city of Richmond as the No. 1 destination place for murals," he says. "People from all over the world will come to Richmond to check it out." S

The Richmond Mural Project will be held from July 22 to Aug. 2. The Kickstarter can be found at kickstarter.com/profile/artwhino.