“Red Riding Hood” would make grandma happy to be devoured. 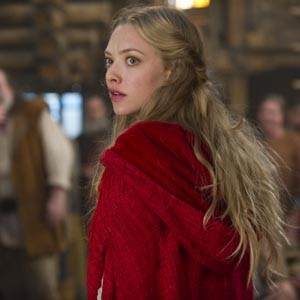 Amanda Seyfried, what big eyes you have. Unfortunately the movies they put you in don't always measure up.

In fact, there seems to be an inverse effect going on. Seyfried is neck and neck, or red lips and blue eyes at least, with Scarlett Johansson as one of the two most beautiful young actresses in Hollywood. And yet her movies are as small and cheap as her features are exceptional. While Johansson gets all the comparatively highbrow work, Seyfried is stuck in stuff like “Red Riding Hood,” a stinker of a “Twilight” copycat that puts her in the arms of an Edward wannabe (Shiloh Fernandez) in a story about an old-world village suffering at the paws of a werewolf.

Perhaps you dropped the magazine or iPad when you read that, yes, some supremely disingenuous people have made a teen romance out of Little Red Riding Hood. (I'm not naming names, but one of them was Leonardo DiCaprio.) The original contains no movie-length material, and without cool vampires to rely on, “Red Riding Hood” bogs down in a slew of unconnected elements, including a medieval rave.

“Red Riding Hood” is so bad it's actually surprising that it was directed by Catherine Hardwicke, who helmed the original, terrible “Twilight.” You are still surprised that someone of that caliber — awful — directed something so much worse. “Twilight” was at least coherent. There are scenes in “Red Riding Hood” that make so little sense — at one point Seyfried's character dons a metal rabbit helmet — that a narrator has to be dragged in to explain them.

Squint hard enough and you'll realize that poor Julie Christie plays grandma, though the character in this version is completely superfluous. Did she and Gary Oldman, as a zealous werewolf hunter, lobby to be involved? None of these people is blameless. They all deserve to wear the rabbit helmet of shame. 102 min. S