Explosions in the Sky let the music do the talking. 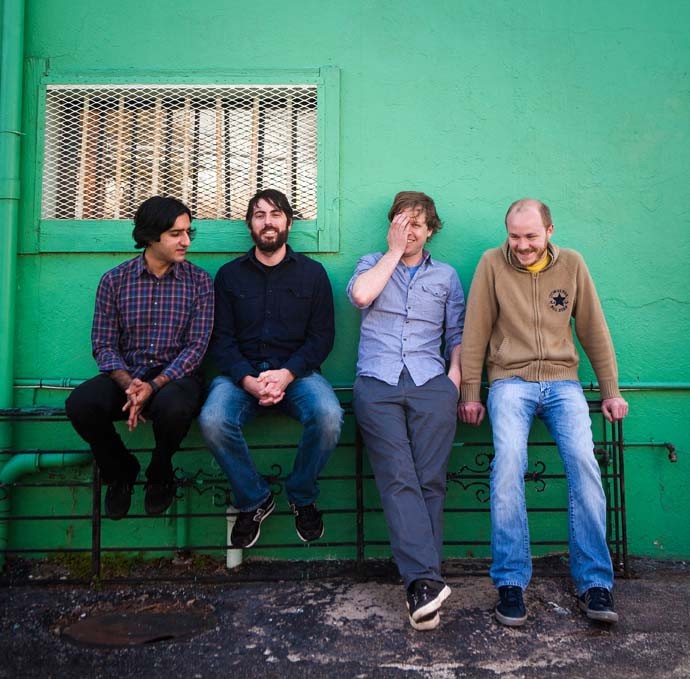 It's almost unfair using words to describe a rock band that has little use for them, such as Austin, Texas, quartet Explosions in the Sky.

Poignant narratives serendipitously pour out of the group's extended instrumental pieces, leaving the listener to fill in the blanks. Few clues are found in the song titles. Even those are arrived at intuitively, according to drummer Chris Hrasky — sometimes before a track's finished. "Hopefully, the titles are interesting enough, but also vague enough," he says, "so [the song] can be a soundtrack to your own little story."

Through five albums, Explosions in the Sky has layered chiming guitar crescendos and marching percussion that bloom into shimmering, bombastic peaks, anticipating stories of both tragedy and triumph. "It's Natural to be Afraid," from the band's last album, "All of a Sudden I Miss Everyone," was partly written while facing tragedy close to home — Hurricane Katrina. "Like everyone, we were obsessed with sitting in front of CNN, horrified, for like a week." Hrasky explains. Curiously, artist Esteban Rey created an album cover featuring a man stranded on a boat in a flooded city. The band's penchant for melodrama is not unlike the lyric-less movements of classical composers; no wonder its songs have underscored films, documentaries, television shows and NPR. The group wrote the score for the feature film "Friday Night Lights," in which the emotional lives of a small Texas town hinge on high-school football.

As Hrasky explains it, leaving graduate school in 1999 was the right decision, even though he was unsure of it the time. In a fit of desperation, he drew up a bizarre flyer soliciting potential bandmates, which was promptly answered by guitarists Mark Smith, Michael James and Munaf Rayani. Explosions In the Sky hit their stride with 2001's "Those Who Tell the Truth Shall Die, Those Who Tell the Truth Shall Live Forever," a dark and stunning record that asks the ultimate questions, posed through a single sample from the war epic "The Thin Red Line." This month the group continues with the release of its sixth full-length, entitled "Take Care, Take Care, Take Care." The album was recorded at the Sonic Ranch, which on a 2,000-acre pecan orchard just outside of El Paso, Texas, near the border with Mexico.

"It was probably our most enjoyable recording experience," Hrasky says. "The environment was so nice and we were able to take a couple of weeks and not push ourselves to the point of insanity." This relaxed recording schedule helped shape the songs that ended up on the finished album. "There's a lot more going on," he says. "We were able to build more layers and it was written without worrying if we could pull any of it off live." S

Explosions in the Sky will perform at the National on April 4. Doors open at 7 p.m. Tickets are $15 in advance, $18 at the door. For information go to thenationalva.com.