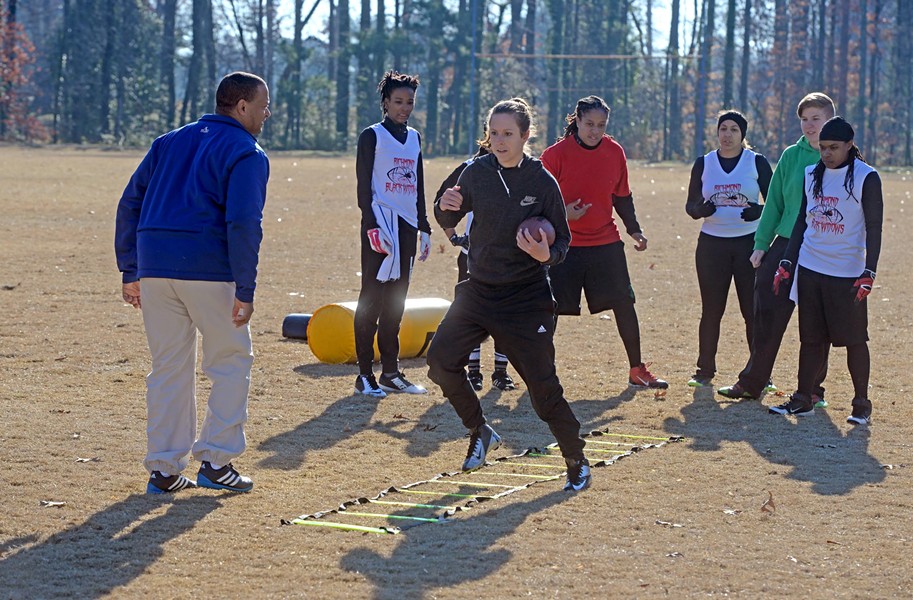 Two football players bend their knees and sink into low defensive stances. Their fingertips are planted in wet, cold grass. On the word “hike,” they explode into the blue and white padded dummies propped on a practice sled that propels forward.

Their mother, Jessica Harris, is one of about 40 players on the Black Widows, Richmond’s second shot at a team in the Women’s Football Alliance — the largest full-tackle football league for women in the country.

Eight years ago, the league pulled its financial support for the area’s first attempt at a team, the Richmond Spirit. But Black Widows owner Sarah Schkeeper, 34, says the team she started in August will play its first game in April.

“I think the city is really open to the idea of this,” she says, “and they are going to support this team.”

A New Jersey native, Schkeeper discovered women’s tackle football through the New York Sharks in 2009. She represented the United States on its national team in 2013, winning gold in the International Federation of American Football World Championships.

Schkeeper says she’s wanted to give other women the opportunity to play tackle football since moving to Richmond more than a year ago. Her team brings together players from age 19 to their early 40s, with backgrounds in multiple sports.

“It’s like learning a whole new language,” says Shayla Brown, 29, who participated in track and field in college. “But if you’re an athlete you can figure out the ropes to any sport.”

The team has held its weekend practices at J. Sargeant Reynolds Community College’s Parham Road campus. But in the months leading up to the first game they plan to switch to the Washington Redskins Training Center.

Team coaches bring experience from women’s professional and men’s semi-professional football, as well as high school — such as Bill Donati, who coaches at Goochland High School.

“They want to play football just like the men,” Donati says of the players. “It’s been long overlooked and they are very coachable.”