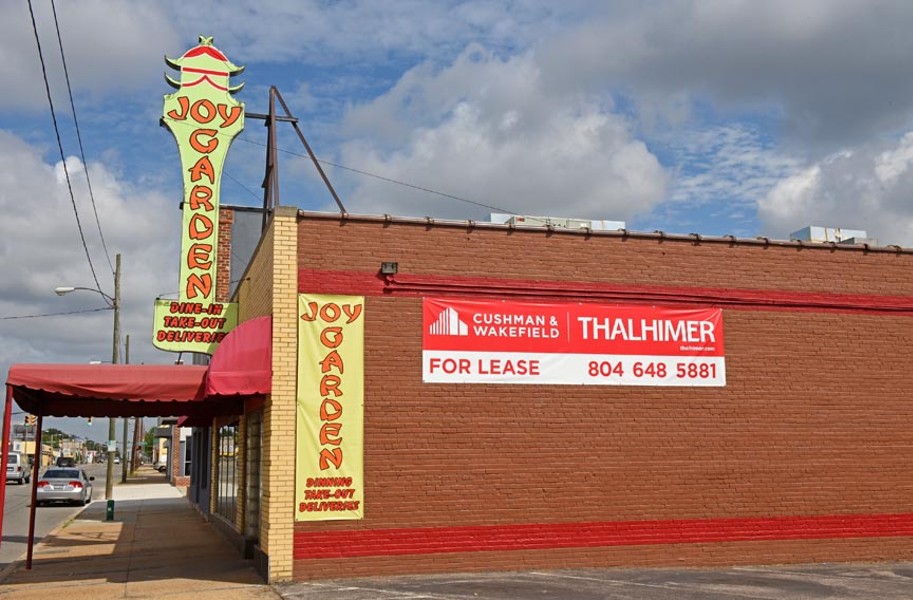 On a recent weekday lunch, three people in a booth at Joy Garden wait patiently for their water.

They’re the only customers, but Mark and Bang Sin are having trouble keeping up. It’s just the two of them, fielding pickup and delivery orders, waiting on dine-in tables and overseeing the kitchen.

The Sins decided to close their longtime Scott’s Addition restaurant at the end of July, as Richmond BizSense reported last week, but calls from customers have them rethinking.

“After the news, we got a lot of regulars saying, ‘Come on, keep open, you guys are a landmark,’” says Mark Sin, who bought Joy Garden in 1982.

But the couple can’t keep the restaurant open past the end of the year, he says.

New owners purchased the building last year, and the Sins say they were told that Joy Garden’s rent would more than double after 2016.

“Scott’s Addition right now is hot,” Sin says. “I don’t blame my landlord for raising the rent, because they spent more money to buy the building and the taxes are higher, too.”

The current rate is around $17 a square foot, and the space is about 4,400 square feet.

“The previous landlord last year offered to sell me the building, and I decided not to, because I’m ready to retire,” Sin says. “Then I could not find good staff to help me because they know I’m closing very soon.”

The staff shortage comes with declining sales. “Nowadays it’s hard to find 130 [customers] at one time. That’s my capacity,” Sin says. “Most restaurants want to be smaller — 50 people or something like that.”

Liquor and business licenses become more expensive when capacity tops 100, he says — and then the restaurant must charge more.

“I can’t use this menu to survive unless I do something like those other guys,” he says. “They’re $15, $20 a plate. Most my customers are middle-class. Ours is a kind of traditional menu, family-style.”

“Part of the appeal of Scott’s Addition is in trying to embrace some new direction but also keeping the older businesses around,” Bouchard says. “But every business has to evolve. Some of them maybe don’t and decide to close up.”

Bill and Patricia Webb own Scott’s Addition’s Dairy Bar Restaurant, open since 1946 when the space was part of a dairy plant. “We bought it in 1996 knowing it was a place that had a good foundation,” Bill Webb says. “But we made gradual changes.”

He says they’ve quadrupled the menu, added 20 feet of patio space and gotten a liquor license to accommodate brunch-goers. “The last three years has been the most exciting cycle of growth,” Webb says. “We’ve seen a significant increase [of customers], particularly on weekends.”

Of Joy Garden, “It’s sad to see them go,” he says. “But I understand that. Unfortunately, somebody bought that building and raised the rent. A lot of these things happen just because they happen.”

Opened in 1957, Joy Garden and its owners have seen cyclical changes through the years. “When I first took over, they called [the neighborhood] midtown, Hermitage,” Sin says, listing a number of restaurant ghosts from the era.

The restaurant was originally Cantonese. Sin later added Sichuan and Hunan dishes. “Dr. Kissinger visited China, and those dishes got popular in the U.S.,” he says. “Just like nowadays, some other foods are getting hot. People’s tastes differ from time to time.”

A much-ballyhooed Chinese restaurant recently opened a few doors down from Joy Garden. “Peter Chang’s — I think they are very good,” Sin says. “Their food is a little different from us. They are a little spicy, more fried, a little saltier. I hope they’ll do well. Besides I am closing, I’m retiring. I had those days when I was younger.”

But it’s bittersweet timing to close when the neighborhood is seeing such growth. “It’s a little sentimental, a little emotional,” he says. “I really don’t want to leave. But when it’s time, it’s time.”