With an Ever-Evolving Body of Work, Richmond Artist Keith Ramsey Pursues a Goal of Practicality

Scott Elmquist Artist Keith Ramsey stands next to his work “Sunflower,” a collaboration with Carren McAdoo Clarke. Ramsey will be at the RVA MakerFest at the Science Museum of Virginia next month.

Certain artists have the eye that can discern both the beauty and the utility of an object in an instant. Keith Ramsey is that kind.

Ramsey says his painter mother, a teacher in Williamsburg, piqued his art interest. On a relentlessly rainy morning inside the cozy cave of a Shockoe Bottom coffee shop, he explains that she would take him and his brother to the library, “show us the same stuff she taught her students — books, assignments, materials. She really wanted us to flex our minds.”

With this foundation and a printmaking degree from Virginia Commonwealth University, Ramsey’s has been a quietly powerful creative force in Richmond’s arts scene over the course of his nearly 20-year professional artistic career. His earliest works were influenced by the steam-punk style.

“I’ve always collected antiques, old metals. In 2012 … I discovered steam punk. That same week, I was in my studio, and I created my first piece of what I call found punk.” That foray into what would become his signature style produced a paper clip holder, made from discarded metal parts; with its sprockets, short, burnished pipes and gleaming glass bowl, it’s anything but average desk gear.

“Practical art for everyday use — that was the goal then and now,” he says. “I wanted something that thousands of other people couldn’t just walk into OfficeMax and buy off the shelf.” 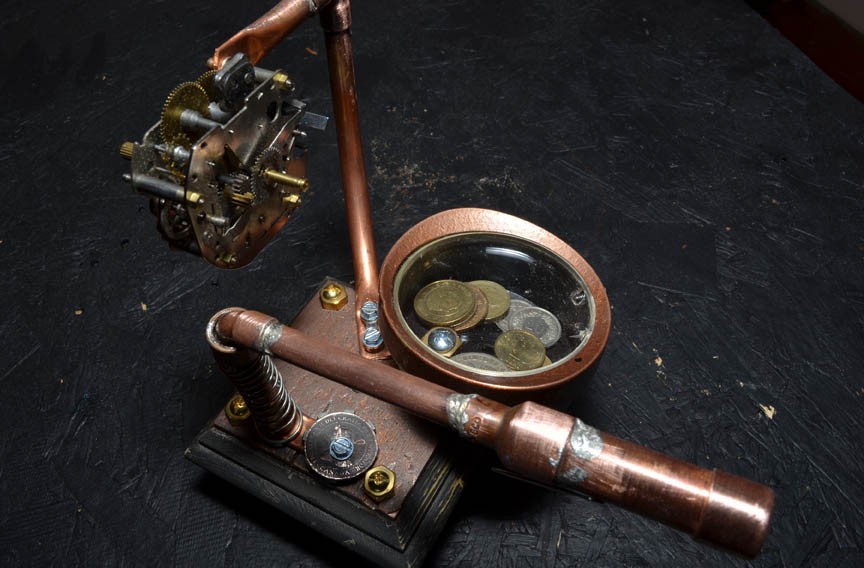 The collecting of castoff objects is essential to Ramsey’s work. “I’m constantly on the lookout for materials for whatever projects may arise,” he says. He describes his South Side work space as “an organized chaos” of metals, wood pieces and broken pieces of furniture, all awaiting their transformation from trash into treasure.

The Übercorp exhibition is an extension of the League of Space Pirates science fiction universe, created by artist Noah Scalin.

“It’s designed to be a sandbox in which creative folks can play,” Scalin says. Thirty-five artists — locals and those from farther away — Leah Palmer Preiss of North Carolina, Tom Megginson of Canada and Denton Pretorius of South Africa — collaborated on theexhibition, curated by Scalin and running through Sept. 28 at Gallery 5.

Scalin asked Ramsey to be part of the show and says he’s admired the artist’s work for several years. “I love that he plays with the line between form and function in his sculptural [work],” Scalin says. He remembers Ramsey’s Diluted Loss portrait series, exhibited at the Black History Museum and Cultural Center of Virginia in 2010, as “moving.” Through these paintings, several featuring the rich, recognizable motif of the American flag, Ramsey explored the experiences of black soldiers fighting the ideological battle of World War II overseas while combating racial discrimination daily back at home — one piece is aptly titled “Attack on 2 Fronts.”

The Übercorp show felt like “a natural way” to work with Ramsey artistically, Scalin says. Among Ramsey’s contributions to the show is a kinetic sculpture, an old bike set twinkling with lights Ramsey installed with master electrician Kevin Minor and part of his Artbiek sculpture series.

Another recent project displays Ramsey’s versatility: When artist Andre Johnson wanted a weathered bench repaired, he commissioned Ramsey, who set about restoring the metal frame, adding custom design elements and cutting wood to fit into the revamped object. Johnson then painted the wood, transforming the bench into functional art.

“I do all of these different things because, first, I want to, and second, because it shows what a black male artist looks like without limits. You can’t just shove me into the Black History Month shows and ignore me the rest of the year. I can’t be pigeonholed; I’m an artist, dude.”

Can art be created in a vacuum outside of the social climate in which the artist exists? Ramsey thinks so.

“I’ve had pieces that focus on the political atmosphere, or that contain a certain message,” he says, referencing his work like “What They Say, What They See,” an acrylic and latex paint panel piece full of egg-shaped, toothy mouths and staring eyeballs, a solitary, silenced figure the subject of their visual scrutiny. “That one was inspired by the immigration ban of multiple, Muslim-majority countries, which felt just poisonous to me,” Ramsey says. These days, while he is keenly attuned to what’s happening in the nation and the city, his art is centering on his sculpture, he says. “The basis of all of my art is honesty, what I am honestly feeling and expressing.”

Two of Ramsey’s painting series are currently on display inside Shockoe Espresso: Cityscapes in Noir and Fragments. The latter, with its skyline perspectives and billowing clouds, juxtaposes the former, which are contemplative, oil and acrylic pieces often depicting a lone figure from a heightened vantage point. Next month, you can find him at RVA MakerFest on Oct. 7 at the Science Museum of Virginia, making and selling found-punk wristbands and lamps. In addition to his commissioned projects, he’s currently preparing a new exhibition, Assemblage, to display at Art Works Gallery next year. S

Keep up with Ramsey’s projects at ramseyartworks.com.