With a new menu every day, the Broken Tulip delivers multiple courses to communal tables 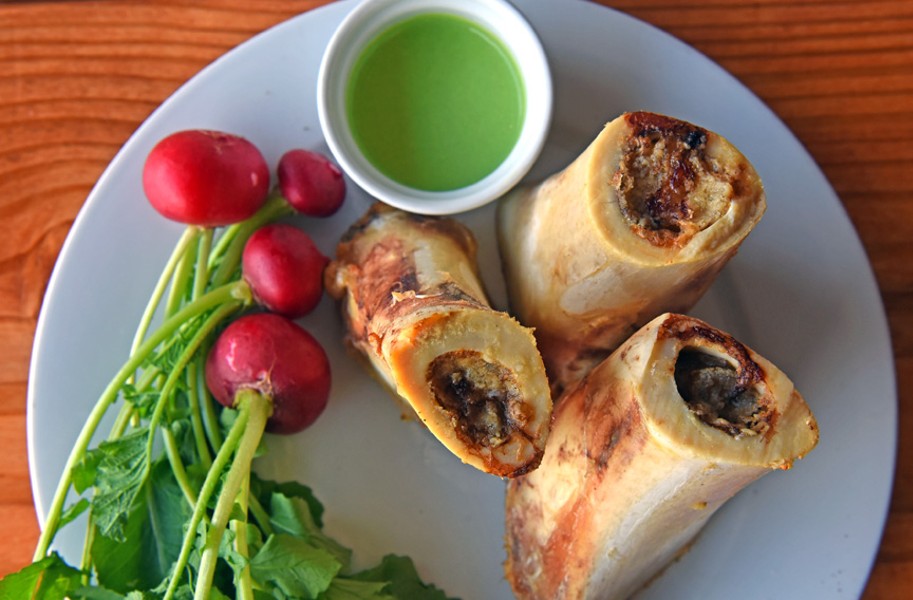 When I was young, my father used to take us out to eat and ask the server to bring us "whatever the chef thinks we should eat." It still remains my favorite way to dine, especially at a restaurant with a daily menu featuring seasonal and local ingredients. I want the trained expert to guide me along a curated experience.

Apparently I'm not alone, which helps explain the rise of chef's tasting menus and restaurant pop-ups. Chefs create a series of courses based on their cooking style and available ingredients, and lead the diner through a special night that can never be re-created.

The Broken Tulip Social Eatery, which opened in November, is all in on this trend. While the food is good, the curation of our evening fell a bit short.

Chef and owner David Crabtree-Logan is a Scotsman who trained at Michelin-starred restaurants in Europe and most recently cooked in Portland, Oregon. He creates multicourse menus each Thursday through Saturday night for $50 per person. Sunday brunches cost $35.

Sariann Lehrer, co-owner and Crabtree-Logan's wife, has spent years in professional kitchens and co-wrote "A Feast of Ice and Fire: the Official Game of Thrones Companion Cookbook." She hosts, serves and mixes drinks.

Then came more composed dishes — a rich, velvety but unfishy fish soup hiding a butter-poached oyster and a salad of early spring mixed field greens and caracara oranges with a kefir and orange dressing.

Lehrer introduced one plate with random-sounding ingredients: Carolina gold rice, house made sauerkraut, sunchokes, peanuts and grated cured pig's heart. Sauerkraut and rice? One bite and I didn't question it: The earthiness of the sunchokes married well with the bright, funky cabbage, punctuated by peanuts and pork and anchored by soothing rice.

"We want people to leave here trying something they've never had before, or something they love presented in a new way," Crabtree-Logan says.

At a restaurant featuring a set menu, the chef develops a foolproof list of reliable dishes. With a daily menu, there are often hits and misses since the chef must work with whatever ingredients arrive. This is true of every pop-up, and the Broken Tulip is no exception.

On the night I was there, the bread hadn't risen properly, and also lacked salt, but made its way to the table anyway. My duck breast was so tough with connective tissue that I left most of it on the plate. Happily when there are a dozen or so courses, a tasting menu can survive a few flaws.

The social eatery part of the name hints at the communal dining experience. Guests share three farm-style tables in the narrow dining room, created to encourage conversation and connection. Eating at the Broken Tulip feels like joining a friend's dinner party. The only problem is, this host is too busy to chat.

We arrived full of buzzy anticipation, the room animated by a large table of happy diners eagerly making new friends. There was no menu — there's a general one online — and no explanation of what food, or how much of it, would be arriving. We struggled to choose a wine to pair with the unknown (we discovered later that there is a wine pairing for $42 per person) and Lehrer guided us to a 2016 Averaen pinot noir from Oregon to match the evening's featured duck.

She was right — it was terrific. I found myself wanting more of her, and of Crabtree-Logan, who remained a mysterious presence holed up in the kitchen, jamming to an idiosyncratic play list that spilled into the dining room. I wanted a menu and to know how much food was coming. I wanted to know more about the ingredients, why they were chosen and where they came from.

The food isn't what's broken for this tulip, it's the missing story. There would be more pop for diners if Crabtree-Logan and Lehrer find a way to join the party. S