With a Familiar Rhythm Section at Its Core, the Messthetics Reinvent the Power Trio 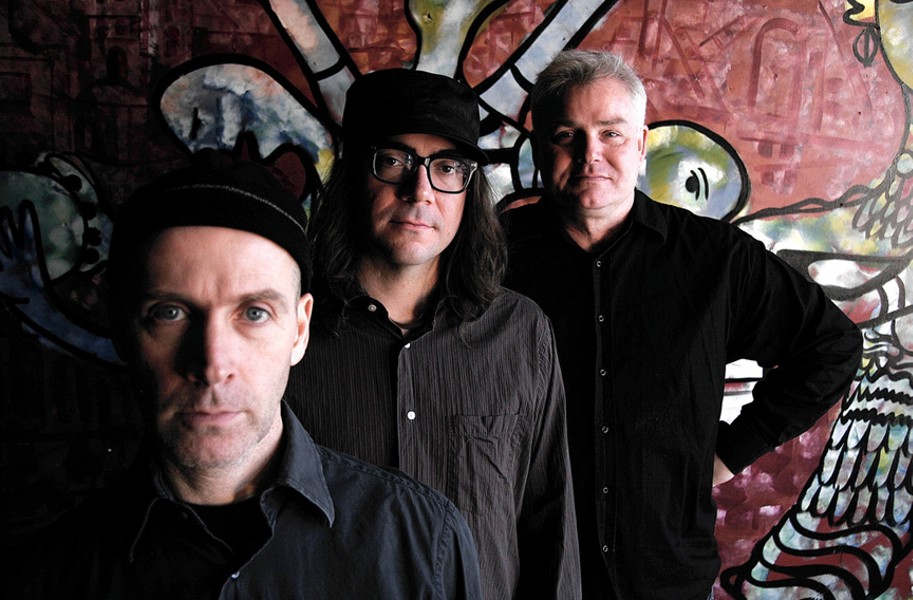 Though it's a bold and bracing band, the Messthetics aren't the second coming of Fugazi. In place of authoritative and forward-thinking hardcore is taut and hermetic math-rock (heavy emphasis on the rock) centered on the dexterous playing of guitarist Anthony Pirog, who's emerged as a primary figure in Washington's out-music community.


So how does the most estimable rhythm section in American punk rock end up backing an avant-garde guitarist who's 15 years younger and whose closest antecedents are Nels Cline and Sonny Sharrock? "By accident, of course," Lally says, laughing

The band is Lally and Canty's first venture together since Fugazi went on hiatus in 2003. In the interim, Lally focused on his own genre-warping music while living in Italy and Canty focused on composing, producing and filmmaking. Both men raised families.

When Lally moved back to Washington, he contacted his old pal Canty. The original idea was to form a group with his old confrere and play music that he had written. He'd compiled a loose collection of riffs and ideas in Italy, but confesses that they "weren't really going anywhere because I didn't understand what they were. [It was] some kind of weird instrumental music that called for someone to improvise."

Enter Anthony Pirog, whose style most closely aligns with the warble-and-wobble tones of Cline and Bill Frisell and whose playing approximates the searing swarm of Sonny Sharrock and the clanging clatter of Sonic Youth's Thurston Moore. Canty had seen Pirog play in a number of guises and was intrigued by the musician's flexibility.

"He really plays a wide variety of music," Lally says of Pirog, who's also helmed tributes to Washington twang masters Roy Buchanan and Danny Gatton. "And I think that's what made Brendan more and more curious about him, seeing him in such different circumstances and various musical scenes."

Canty suggested they give Pirog a shot. The trio clicked immediately and soon enough, Canty and Lally, the elder musicians, were following Pirog's lead through extended jam sessions in Canty's rehearsal space. "Playing [the music that Lally had written] and hearing Anthony playing to it, I was like, 'Why on earth would we do that stuff," Lally laughs. "We all knew we enjoyed playing together. I think Anthony had been aiming to make a solo record and wanted a rhythm section, so he asked us. And of course, we were like, 'We're in!'"

Across the record's nine cuts, the trio lets ideas fly from all directions, subverting the classic expectations of the archetypal power trio. Pirog ostensibly is the star, but Lally and Canty's reborn chemistry drives the action, their rhythmic repartee guiding Pirog's dizzying patterns with a commanding and propulsive undertow. On light-speed prog numbers such as the searing "Serpent Tongue" and pummeling "Crowds and Power," the rhythm section's muscular teamwork gives Pirog a launchpad from which to send cosmic solos into orbit. Also the languid numbers yield beautifully ruminative moments: Canty's polyrhythmic shuffle on "Once Upon a Time" opens space for Pirog's weightless, minimalist melodies. Their exacting quietude on closer "The Weaver" buttresses Pirog's delicate lyricism with a cinematic heft.

"Brendan and I can think, musically, pretty quickly from one thing to the next," Lally says. "We just understand each other really quickly. That is, of course, such a benefit to have, and hopefully that helps Anthony move along what he's thinking that much faster."

The trio's thinking is so quickly simpatico that it's already working on the next record. It played four new songs at a recent show in Brooklyn."I don't want to ruin it by talking about it too much," Lally says. "But it really is quite easy to play with together, and it's super exciting. It always feels like there's new ground to cover and break."

Indeed, the impetus behind the music is breaking new ground, not retracing old steps.

In the Messthetics, "everything is different," Lally explains. "I'm playing music: that's the same. But you get together with different people and things are very different. Brendan is Brendan, and I know him really well as a musician, so that aspect is the same. But of course, it's completely different, because it is so not Fugazi. And it's not going to be." S

The Messthetics perform with the great Tuareg guitarist Mdou Moctar and Time is Fire featuring former Richmond drummer Jim Thomson at Strange Matter on Monday, May 14, at 7 p.m. $10 to $12.