CAT's "The Kitchen Witches" is one tasty morsel. 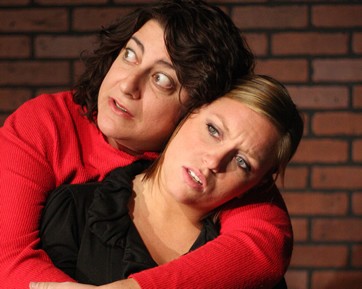 Those with a stomach for gastronomical humor take heed -- Chamberlayne Actors Theatre's "The Kitchen Witches" is a delicious treat.

The play follows two rival chefs as a twist of fate forces them to co-host a public-access television cooking show together. Amy Berlin is excellent as Dolly Biddle, the quirky and spirited cook, and Carroll Andrews portrays Martha Stewart-wannabe Isobel Lomax. The melodramatic matrons duke it out over everything from who gets the better dressing room to the very personal details of their 30-year rivalry. This bickering turns the poorly-watched cooking show into a hit program.

Playing referee to the two divas is Brandi Buisset as Stephanie Biddle, the daughter of Dolly and the television show's producer. Two of the male roles are cast with women, in a nod to the Virginia "Minds Wide Open" celebration of women in the arts.

If you don't mind a few sexually-tinged innuendos or flatulence based humor, the show is pretty funny. The television show is sponsored by "Martin's, where you can eat lunch and get gas," and one of the cooks refers to her infertile antagonist as "Julia Child-less."

The dramatic scenes don't always have the same kind of chemistry, and the comedic ones sometimes don't ham it up as much as they should. And the audience never really gets to see Isobel and Dolly go at it, covered in flour and tearing each other's hair out as Stephanie tries to separate the two.

Lin Heath's set design is believable as the TV show kitchen it's supposed to be. The stage has a major problem with shadows, but this is more a limitation of the theater than a fault of Alan Armstrong's lighting design.

The performance had a few opening night hiccups, but if you're looking for a fun night and don't mind an off-color joke or two, "The Kitchen Witches" is the show to see. And to savor.