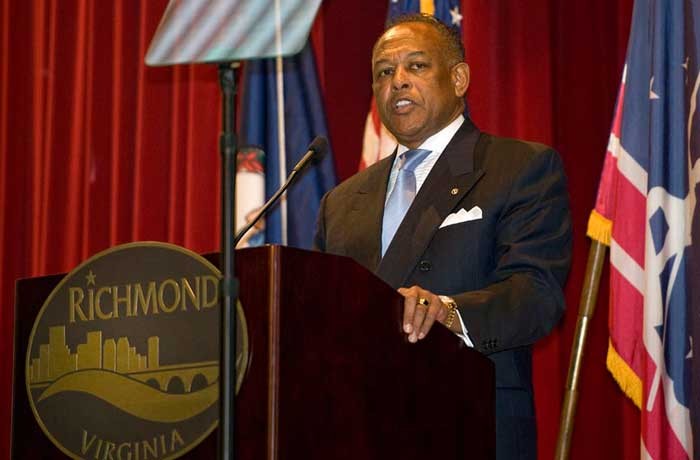 Can you feel it?

"An explosive pace has been set, and the Jones administration is leading the way," a robotic narrator says, while video montage of so many mayoral accomplishments flashes across the screen.

Before Mayor Dwight Jones takes to the stage to deliver his State of the City address last week at Thomas Jefferson High School, the video captures the mayor delivering all manner of feel-good announcements — bike races, slave-trail markers, a new-jail-ribbon cutting, library openings, you name it — sometimes while wearing sunglasses.

If Jones' first term as mayor can be measured by the brightness of Richmond's future, then, well, the present is still a bit overcast. So many things that Jones is taking credit for have yet to happen, as wide ranging as new school buildings, neighborhood revitalization plans, riverfront development, poverty reduction and regional transportation. The mayor has big ideas, and a lofty social-justice agenda, but he's no closer to accomplishing many of his main objectives than he was in 2008, the last time he ran for mayor.

Of course Jones officially hasn't announced plans to run for re-election, but make no mistake — he's running. He's also fully aware that he's vulnerable, as evidenced by his unusually aggressive speech Jan. 31, which starts out with a low rumble and finishes with a sermonic flurry. Jones, senior pastor at First Baptist Church of South Richmond, rarely lets the preacher out in public.

Many audience members seem to feel the call, responding with yelps of approval (but, careful not to mix God and politics, no "amens"), even if things get a little awkward.

"I read in the newspaper this morning about some eagles that were having their privacy invaded by an eagle cam that is watching them, even as they procreate," Jones said, gaining momentum. "But the truth is the greatest picture of an eagle is not an eagle in the nest, but the greatest picture of an eagle is when they stretch their expansive wings and take to the sky and soar high above the earth."

"Richmond will not be great when we are sitting still, doing nothing," he continues. "But when we stretch our wings and when we soar to the heights of success and possibility, there is nothing that will ever hold us back."

In his first three years in office, however, you could argue that the biggest thing holding back City Hall has been the Jones administration.

"It's so ridiculous to think we're really making progress," says Councilman Bruce Tyler, a frequent Jones critic who is contemplating a run for mayor. "We're not. We're not making progress at all."

Tyler makes note of the jail debacle, the lack of progress on redeveloping public housing and the mayor's "shortsighted" deal with the Richmond Metropolitan Authority, which repaid the city its long-lost $62 million in old loans but sparked a renewed push in the General Assembly to strip Richmond of majority control of the authority's board.

"The city gets $62 million and then has to fight like hell to keep the RMA from being taken away from us," Tyler says of the authority, which owns and operates the Downtown Expressway and Powhite Parkway toll roads. "It's unfortunate."

Insiders say Jones is sending a message that he understands his vulnerability, and wants to flip the script. In the weeks following his public spat with Richmond Free Press Publisher Raymond Boone, Jones is looking to re-establish himself. He's been too hands-off in his first three years, and he's ready to take charge.

Hence the preacher, and the slightly shocking admission last week that the city was too quick to "celebrate mediocrity" within the public school system. Celebrating decreases in truancy and securing minimalist state accreditation, Jones says, isn't enough.

"And I must admit that I myself have participated in these celebrations of mediocrity," he says. "But we've got to stop. A tier-one city has got to recognize that we will accept nothing but excellence in education. We have got to let go of the mediocrity and embrace excellence. … Our children are crying out for help."

It is Jones' most pointed attack on the School Board and its administration since taking office, not to mention refreshingly honest. But the timing is no accident. Four of the nine School Board members have announced they won't seek re-election, which means change is coming. Jones, some says, is trying to head off the winds of dissent.

"I felt some vindication," says the School Board's most outspoken member, Kim Gray, who's been railing against the mediocrity for some time. "Our kids need a lot more than they are getting. If we are talking about jobs and economic opportunity, we are talking about education at every level."

But talk is cheap. Paul Goldman, who ran against Jones in 2008 and is a longtime political consultant, says this isn't the first time Jones has promised to fix the city's underperforming public schools. Goldman says he has no plans to run for mayor this year.

"If you don't fix the schools, you can't fix poverty," Goldman says. "He knows he's vulnerable here. When you see you have a problem, you get in front of it." S