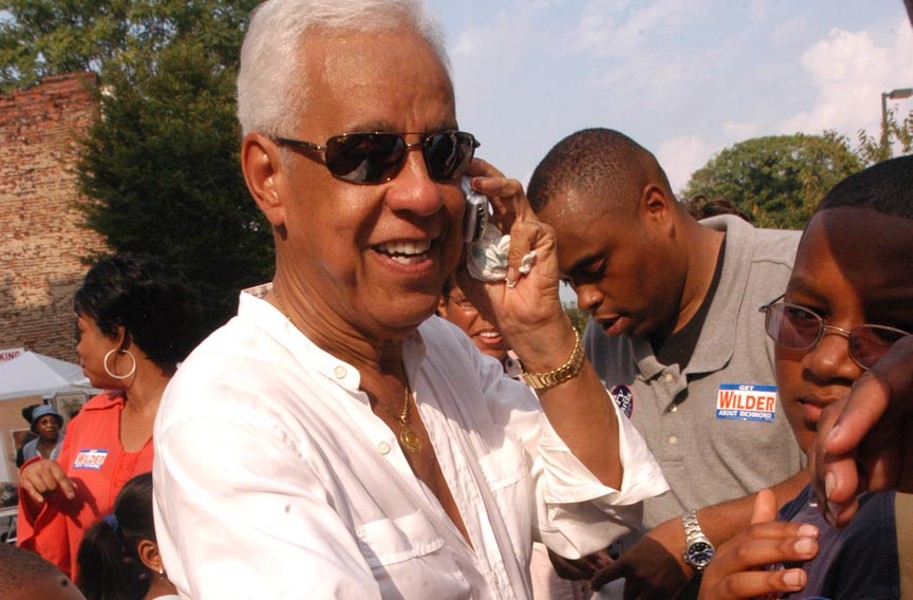 Scott Elmquist He came, he conquered: Master campaigner L. Douglas Wilder works the 2nd Street Festival in this file photo from October 2004 before his dominant win as mayor.

The 2nd Street Festival brought throngs of revelers and a shining musical lineup to Jackson Ward over the weekend, with Rare Essence, DJ Kool and James “Saxsmo” Gates. But it was missing an offstage star.

During this same weekend a dozen years ago, Richmond voters were a month away from choosing their first popularly elected mayor in more than two generations. All four candidates worked their way through the crowd.

But only one of them worked the crowd itself — a seemingly magnetized source of political ions, a 73-year-old named L. Douglas Wilder.

A reporter from Style followed along, describing a superstar stealing the show: “People ask for Wilder’s autograph, and he obliges them, smiling. He gives cordial kisses. He hugs stone-faced children and takes the cell phone of a woman who says her mother is on the phone and wants a word with him.”

The mother later tells the reporter, “I love him for so long but he don’t know it.”

Wilder commanded attention. He was charismatic, a luminary. The city was looking for leadership, someone to rally behind, a source of enthusiasm.

Wilder didn’t need to guilt an audience into applause, like Michelle Mosby at last week’s Mayorathon — perhaps jokingly? He didn’t need help from another governor, or to get his story out there like Levar Stoney. After all, he was a governor.

And you wanted the first popularly elected mayor in 56 years? The history books already were familiar. As lieutenant governor, Wilder had been the first black candidate to win a statewide Virginia election. A few years later, the grandson of slaves became the first elected black governor in American history.

He had no need to spend time on defense, like Joe Morrissey, or on a nice-guy offensive, like Jack Berry. He didn’t need to bother with walking you through his record, like Jon Baliles, or showing plans, like Lawrence Williams, or explaining why he was still in the race, like Bobby Junes.

Why, you’d be fortunate to have him — and he loved you back, Wilder seemed to project, leveraging a healthy ego while seeming to humble himself to run for mayor. Stick with him, he promised, and he’d clean things up.

The incumbent mayor, Rudy McCollum Jr., was one of Wilder’s three opponents to take a beating at the polls in November 2004. Wilder won with nearly 80 percent of the vote. “To say that we were an underdog is an understatement,” McCollum said the next day, as quoted in the Washington Post.

What’s this election about? For the current crop of candidates it seems to be about fixing things — city finances, schools. No shiny projects, Berry likes to say. But that doesn’t mean the campaigners can’t shine. Because they can have all the best intentions and skills and ideas and know-how — but first, they have to win.

So far, the political magic remains stuck like a rabbit still in the hat.

With a month to Election Day, someone needs to differentiate, ramp up the visible energy, stand out from the crowd. Because there’s still a crowd, which has been about the only dominant conventional wisdom of the race, aside from Morrissey’s poll numbers.

It started with the novelty of a dozen candidates back in April, enough to draw curiosity seekers to the first mayoral forum.

Or were they drawn there because of the forum’s organizer, Wilder? S