“The Hangover” guys go for another round of monkey business in Bangkok. 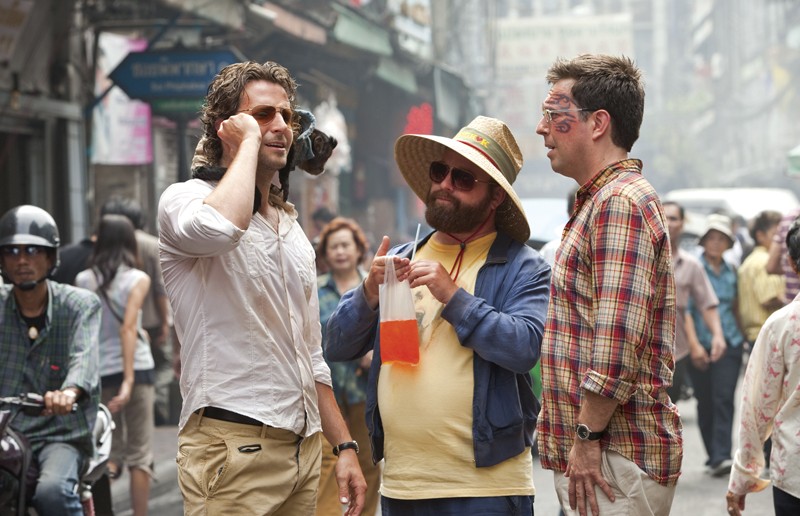 You really feel like a sucker plunking down $10 for a movie when the only things brand new are the product placements. Yes, the guys from the hit comedy “The Hangover” are back, in a cash grab so cynical you wonder why it’s not being presented in 3-D.

The movie has its moments — which come almost exclusively from the brilliant Zach Galifianakis — but boy do you have to pay for them, with patience as well as money. Watching Stu (Ed Helms), Alan (Galifianakis) and Phil (Bradley Cooper) run around wildly overacting about how they don’t remember anything the second time can be a little squirm-inducing.

This time the setting is Bangkok, where nice-guy Stu is getting married and wakes up, again, with his buds on the wrong side of a drug- and booze-fueled night out before the wedding. Director Todd Phillips has taken no chances that his surprise hit will fail to reproduce the magic a second time, reincluding every single memorable element from the original, which means new city but no surprises.

Stu wakes up with a tattoo on his face (instead of a missing tooth), the boys find a monkey in their hotel room (instead of a tiger), and Ken Jeong’s Mr. Chow pulls out his miniscule genitalia (except this time for no reason except that it got laughs, supposedly, in part one). You really hope this is inventive use of computer generated imagery and not someone’s pitiful bid at fame.

Galifianakis’ Alan is the only character that doesn’t feel as dispensable as the plug-and-play dialogue (“You drugged me again?!”). This is the man who made “G-Force” watchable and he delivers the majority of the laughs. I chuckled even when he made the simplest gesture, like dropping his ice-cream cone. Is the movie worth seeing just for him? Maybe. If anything, he’s too good for it.

Save for a few moments with a world-weary monkey, which is really Alan’s monkey anyway, the rest of “The Hangover Part II” is about as original and memorable as a night in a tourist bar. (R) 150 min.