Why Virginia's Decades-Old Shad Planking Is Getting a Political Reboot 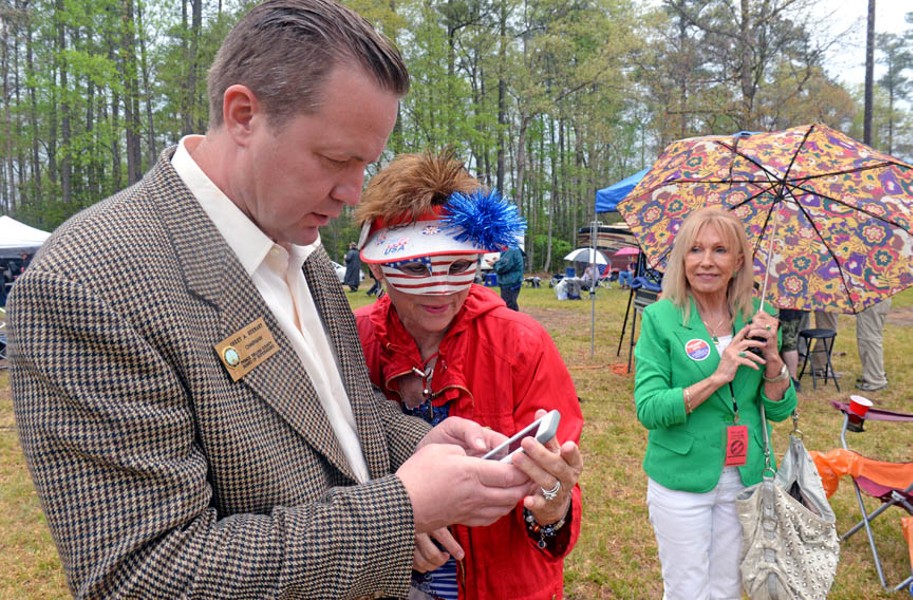 What had been an annual political jaw fest for Virginia’s good old boys, replete with sign wars, back-slapping and Confederate flags, was markedly different last week.

The renamed Shad Planking and Grapes and Grain Festival, held just outside Wakefield on April 22, still had its share of mostly Republican politicos. They included John Adams, a Richmond lawyer running for attorney general, and Corey A. Stewart, the Prince William County supervisor who is tough on immigration policies and is stumping for Donald Trump.

Yet the new title reveals a change in attitudes. Past versions of the traditional gathering saw attendees swill bourbon and munch on shad — fish that was indirectly roasted while hanging on wooden planks.

Now there’s Virginia wine to go with the whiskey.

And there wasn’t a Confederate flag anywhere to be seen. The Virginia Flaggers, a Confederate remembrance group, had called the Petersburg marketing company that re-branded the Shad Planking about attending. They were told that they were free to attend, but that the event was meant to be inclusive and welcoming. The Flaggers didn’t show.

What’s going on is that the Wakefield Ruritans, who have organized the event since 1949, want it to continue on for decades. For years, the Shad Planking was intended for white, male Democrats. Gradually, it became dominated by conservative Republicans. Confederate flag appearances were part of the mystique.

“We need to attract younger people to keep it going,” said one event organizer, who asked not to be identified.

To be sure, there were people with plenty of strong political views. At the Virginia Tea Party Patriots stand, Bob Keeler of Richmond said that “the current mood is against regular politicians.” He noted the popularity of Republican presidential contender Donald Trump and his socialist counterpart, Bernie Sanders.

One sign read: “Eric Cantor, Flat Out Not Conservative.”

At the podium, Adams attacked Attorney General Mark Herring for his supposedly progressive legal positions. “That’s what happens when your attorney general ignores the constitution and laws you passed,” he said.

Speaking with Style, Stewart said he’s serving as the Virginia chairman of the Trump campaign because “people are tired of platitudes.” Stewart, who gained national attention for his tough policies against undocumented aliens in his county in 2008, said that Trump is right about putting up a wall on the Mexican border: “We need enforcement and security.”

Other attendees pitched wine or services. Phyllis Geron sat with wine bottled at the Saudé Creek Vineyards in New Kent County. Another booth displayed Copper Fix single malt whiskey. A local lawyer advertised expertise with driving under the influence and speeding cases, perhaps in a nod to the strict local traffic enforcement on Route 460, the main drag through Wakefield.

The event was marred by thunderstorms and what appeared to be lighter than normal attendance. Observers expect more people next year because of the 2017 races for governor, lieutenant governor and attorney general.

Yet politics still seemed to be the main selling point, despite the event’s re-branding. Amy Butler, attending from Prince George County, sported a Mardi Gras mask in the shape of an American flag. “I’m definitely a Republican,” she said. S