Who Was Vivian Maier?

A surprise Oscar nominee for best documentary explores one of the unsung street photographers of the 20th century.

A rare selfie by photographer Vivian Maier and another image rescued from obscurity when John Maloof began buying her prints from an auction. Maier is the subject of an Oscar-nominated documentary playing at the Byrd Theatre on Sunday.

Some people hit the lottery. John Maloof hit the auction.

The longtime flea market fan and real estate agent was delving into historic preservation on Chicago’s Northwest side as president of his local historical society. He found an overlooked part of the city, he says, which led him to co-write a book. And that project sent him on a scavenger hunt for images.

In 2007, he visited a local auction and took a gamble, buying a box of negatives for around $400. Maloof didn’t know it then, but he’d found a fine arts treasure.

Scanning the negatives, he grew obsessed with the painterly Rolleiflex images of old street scenes — at turns mysterious, tender, dark and unsettling — but always masterful in composition and use of light. He learned they were taken by a reclusive nanny named Vivian Maier, who was born in New York and grew up in France before moving to Chicago. She hadn’t paid rental fees on the storage, so her images and audio recordings were auctioned to several buyers.

Maloof’s discovery is now the subject of the recent Oscar-nominated documentary, “Finding Vivian Maier,” which will be screened Sunday, Feb. 15, at the Byrd Theatre. The showing is a joint fundraiser for the Byrd and the Bijou Film Center.

The film treats Maier’s story as a mystery, interviewing the grown-up children she cared for from the 1950s through the 1970s, when many of the images were taken. Directed by Maloof and Charlie Siskel, the nephew of movie critic Gene Siskel, the movie explores such questions as: Who was this woman and how did she develop her artistic vision? And why would she keep her photos secret from the world?

Maloof managed to save about 90 percent of Maier’s work from other buyers — about 150,000 negatives and more than 3,000 vintage prints. After he began posting them on Flickr, they went viral. International museum exhibits followed, the critics were rapturous in their praise, and media spread the story wide, with values on the work skyrocketing. But by the time Maier’s work became known, she’d died in 2009. Maloof never had a chance to meet her. 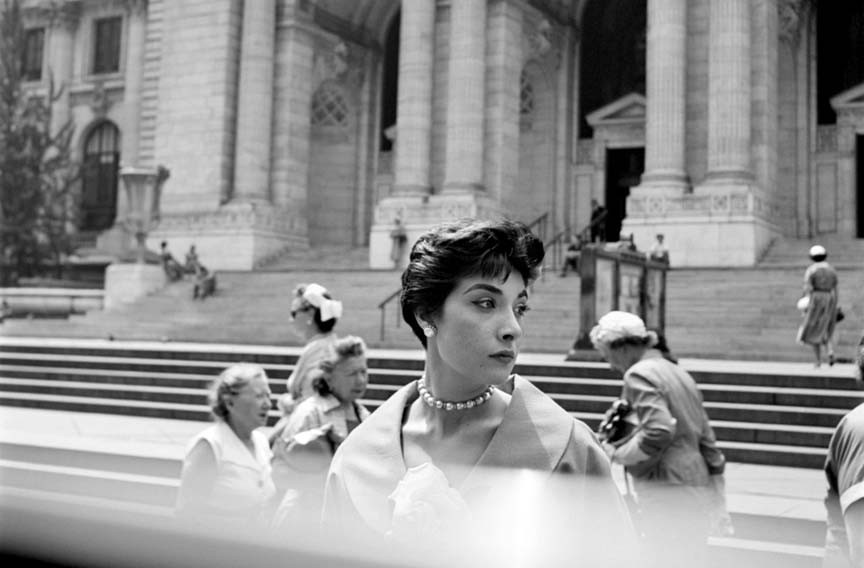 There’s a legal chapter unfolding to the story too. Cases are pending with a Washington lawyer that challenge the rights of current owners to commercialize the work via federal copyright law. Cook County in Illinois has taken charge of Maier’s estate in an attempt to gain control of her work. The Chicago Tribune reports that Maloof has put all plans to market the work on hold during an ongoing search for living heirs. The whole mess could take years to resolve.

Bijou Film Center co-founder James Parrish says he was asked to show the film by the owner of Candela Gallery, Gordon Stettinius, who has a similar story of his own.

Stettinius, also a fine art publisher, learned about the Maier story before most of the world. He’d become involved in rescuing the work of a friend’s elderly neighbor, Gita Lenz, a former photographer whose work hung in the Museum of Modern Art in the 1950s. She left behind a trove of beautiful images when she died at 100.

“Around six years ago, people kept confusing what I was doing with Lenz and his work with Maier,” Stettinius says, “so I reached out to see what he was doing.”

“I was jealous of the groundswell of attention,” he says, “but I was also a fan of the work. I contributed to the Kickstarter campaign to produce a book, which raised more than enough money.”

In 2009, Stettinius procured some gelatin silver prints from another Maier collector and showed the work at Candela Gallery. He also had dinner in Chicago with Maloof, who’s taken flak in media reports for profiting from the work of a dead woman who in life had avoided public attention.

“He’s an interesting guy, in some ways I think he’s tailor-made for this kind of discovery and promotion of an artist,” Stettinius says of Maloof. “He’s got a lot of energy. I found him really likeable. He was not a photographer or industry professional but has been a quick study. The rap he gets is that he’s a profiteer, but I think he’s effectively brought attention to work that a lot of people appreciated and created this job for himself.”

Stettinius was doing a similar thing with Lenz, publishing a book and getting some attention from NPR. He received modest recognition within fine arts circles, but the Lenz work hasn’t had the massive crossover appeal or built-in story of Maier’s haunting street photography.

“Maloof did something I wish I had done, which was understand the woman a little better,” Stettinius says. “I just knew about photography. I projected upon her a desire to see her legacy cemented because that’s what I would want for myself.”

Regarding the copyright controversy, Stettinius says it would be unfortunate if the Maier work got “all bottled up and boxed up and contained” and lost for posterity’s sake: “I just feel to clamp down on it would be a bad result.”

Stettinius will be on hand for the Byrd showing, armed with a new portfolio of images from Howard Greenberg Gallery in New York, which represents Maloof’s share of the Maier work. He hopes to interest Richmond-area collectors.

The last Bijou pop-up fundraiser was a showing of the Beatles’ “A Hard Day’s Night.” Parrish says they were looking for a contemporary follow-up so people wouldn’t think the Bijou would be showing only old movies when it opens.

“I was interested by the story of an amateur who was passionate about art and does it because they love it,” Parrish says. “Plus, the film hasn’t played Richmond. It’s the kind of film we’d play at the Bijou.”

The Bijou Film Center plans to file for nonprofit status within a month, Parrish says, and begin to form its first board. Parrish and co-founder Terry Rea will continue to hold pop-ups while looking for a rental space with 3,000 to 5,000 square feet to open their new film center. S

“Finding Vivian Maier” screens at the Byrd Theatre on Sunday, Feb. 15, at 7 p.m. Advance tickets are available for $5 at Eventbrite.com. Tickets cost $7 at the door. There is a pre-happy hour at Portrait House from 4-7 p.m. and an afterparty at New York Deli at 9, with music by Chez Roué.