Who Wants a Stormproof Straw House? 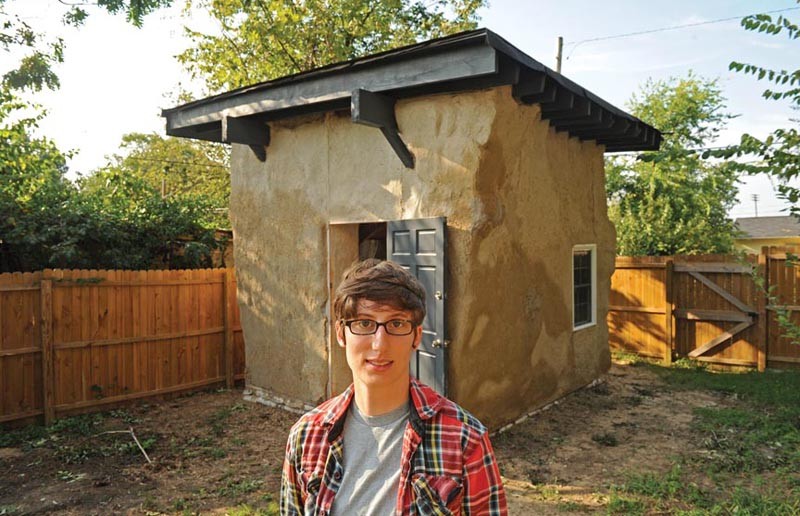 Maybe the first little pig was onto something. While Hurricane Irene huffed and puffed, a house made almost entirely of straw went unscathed.

The 13-foot structure is the project of Blue Clements, a 25-year-old Virginia Commonwealth University graduate. In 2009 Clements, a sculpture major who also studied engineering, got a $3,000 grant from the university to build the house as an experiment in affordable, sustainable shelter.

It seemed like a simple proposition, but the three-month project turned into a two-year struggle.

A friend who lives in Randolph offered his backyard. Clements called upon other friends to help her build the house’s wooden skeleton. In the course of hoisting some “stupidly huge lumber,” she says, a thick roof beam fell, striking one of Clements’ helpers.

“I’m 22 and I just killed one of my friends.” That was Clements’ first thought. Luckily the beam had only scraped him.

Then came the note from the city building inspector. Clements had miscalculated; the house overstepped the property lines. She had to redig the drainage trenches, move the concrete piers and readjust her plans.

Clements prolonged the process by deciding to quit using power tools. She wanted to know how it felt to drill holes with an auger, to shape joints with a chisel. As autumn approached, she worked late into the evenings in the glow of an alley streetlight. Curious neighbors dropped by to see how things were going with what became known as the cave man house.

Last summer Clements stacked about 200 straw bales around the wooden frame. Then she worked for a year to plaster the walls with a sand and clay mixture. When it rains, the clay swells, forming a watertight seal to protect the straw within.

Clements daubed on the last plaster in July. The walls are solid, if bulgy. The beams are painted blue. Three windows and two skylights brighten the interior.

But it’s empty. As a student Clements had planned to live in it, but living without electricity didn’t fit so well with having a full-time job. She’s searching for someone to adopt the house, and for a good way to move it. “That’s the next big project,” she says.