Who Is a Terrorist? 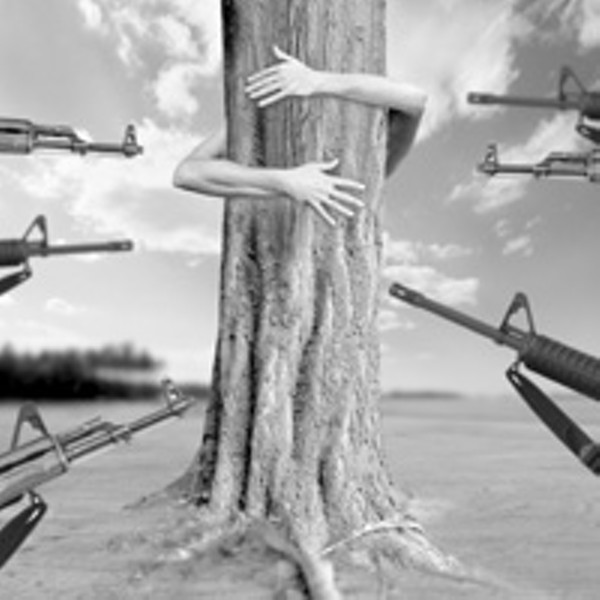 I do not know what crouches inside my FBI file. It must be a skinny one. I left Earth First! after a few years because of its strongly anti-technology philosophy. All I'm certain is in my file is my ownership of an often-abused Buick I drove (through a stream) to an Earth First! "Rendezvous" where we drank beer, talked about biodiversity, drank beer, sat in a sweat lodge, ran out of beer. All the while, a humorless man in a camo jumpsuit recorded our license plate numbers. He lurked at the fringes of our nighttime partying and daytime ecological workshops and didn't even take a beer when we offered him one.

At the time we laughed it all off. Not so now, as the federal government prosecutes members of the Animal and Earth Liberation Fronts. Because of the scope of the laws used, the prosecutions send a shiver down the spines of mainstream environmentalists. Moreover, the impact of this case goes far beyond environmental causes to include any form of civil disobedience. While fretting about civil liberties threatened by the Patriot Act and the Bush program of domestic spying, we've overlooked recent limits on nonviolent protest enacted at the behest of some powerful special interests, notably developers, oil companies and automakers.

Part of today's legal sea change hinges on a definition of terrorist used by the FBI when they arrested individuals charged with arson at a Western ski resort and an SUV dealership. Call the ALF and ELF radicals kooks, green weenies, or even arsonists. Just don't call them terrorists. The rhetorical weight of the word and what it signals, a change in our laws pushed by corporations, should have more of us terrified.

Let's step back a moment. Flying jets into skyscrapers is terrorism. Kidnapping people and torturing them is too. Suddenly, however, arson for political ends has become terrorism. So has sitting in a thousand-year-old tree to save it, as did author and activist Julia Butterfly Hill. Like Henry David Thoreau, Hill now refuses to pay taxes.

Wait. Thoreau wrote "Civil Disobedience." Is he now a terrorist?

Our nation got to this legal brink thanks to laws such as Texas House Bill 433, introduced in 2003 to make one liable not only for direct action but also for providing "financial support, resources or other assistance to an animal rights or ecological terrorism organization." That means it becomes a terrorist act to stroke a check to groups supporting civil disobedience. For now, the penalties under these laws are civil ones. Will they be felonies later? We cannot rule this out in the climate of fear governing the war on terrorism.

So I'm still a terrorist, at least in the eyes of several states that adopted such laws. I contributed to defense funds of Earth First! members arrested for sitting in trees in an Alaskan national forest destined for clear-cutting. The protests, some of which succeeded, aimed to draw media attention to the natural world and its rape by large companies leasing public lands from the Forest Service at below-cost contracts. The logs often went to Asia at a loss to our government and taxpayers. We figured the media would love this.

Boy, we beer-chugging Earth Firsters sure were naive about how media work. Instead of making us their darlings, news outlets began to report "eco-terrorism," and the phrase gained widespread popularity after Ted Kaczynski, the infamous Unabomber in his Montana cabin, killed and maimed people with letter bombs.

The term was well-established in public discourse when the Texas law was proposed, to the delight of some companies with deep pockets. As a contemporaneous article by the Sierra Club noted, HB 433 and similar laws came from a prototype developed by "more than 2,400 conservative lawmakers" in the American Legislative Exchange Council. Among ALEC's 300 corporate sponsors contributing $5,000 to $50,000 a year are ExxonMobil and General Motors. To us "eco-terrorists," the logic is fairly clear. The same gents who sell us Hummers and the gasoline to squander in them write anti-terrorism laws used to sue those writing checks to support free speech and protest.

It does not have to be that way. Most environmentalists do not want to destroy private property; we want to live in balance with nature, giving back at least as much as we take. We also want to awaken a nation of gadget-obsessed, sprawl-addicted fatsos racing, in 10 mpg Escalades, toward the abyss we all dug. A graceless parody? Certainly. But when one steps outside in January and finds it 70 degrees while fellow citizens praise the "good weather," the fear inspiring the parody seems real enough and the need to educate becomes imperative.

As an old Earth First! slogan put it, "Nature Bats Last." Now she seems to have picked up a spiked club, and we are being pounded by an unstable climate. Her revenge is no consolation to those who for decades have been trying to warn of preventable risks to the natural world and our civilization. Now both are under siege by new laws. Even as we continue to wreck the natural world, we are making America into a different nation. There is an old and dark name for it: plutocracy. S

Joe Essid teaches English at the University of Richmond.