Who Gets a Lifeline?

Promoter Jessica Gordon gives her outlook on booking shows and why a newly launched grant will be essential for venues. 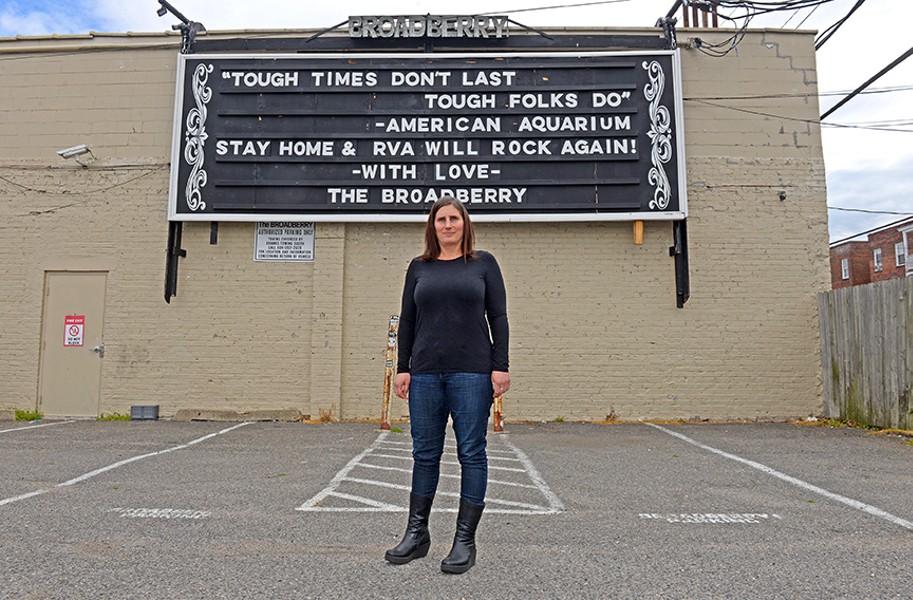 Last week was a critical one for operators of live music venues in Richmond and around the country.

Starting April 8, they could apply for Shuttered Venue Operators Grants, which will disperse over $16 billion to operators, be they theatrical producers or performing arts, museums, movie theaters, zoos and aquariums, or yes, live music bookers.

It’s all part of the pandemic relief package from December and the grants will be administered by the Small Business Administration. However, the application process has been delayed for months. Finally, eligible applicants may now receive up to 45% of their gross revenue from 2019, capped at $10 million. The funds can be used for anything from rent and utility payments to payroll, administrative, insurance and other specific costs.

Jessica Gordon, co-owner with Lucas Fritz of Broadberry Entertainment Group, which exclusively books the Broadberry, the Camel, Richmond Music Hall and Ashland Theatre – says the grants are an essential lifeline for venues, which have been closed for 13 months. The numbers don’t lie.

“In 2019, we did roughly 550 concerts. Since the pandemic started, we’ve done 11,” she says, adding that Broadberry Entertainment furloughed its entire staff of five full-time employees and 30 other part-timers for most of the past year. “People have had to pay all their bills out of pocket this whole time.”

At the start of the pandemic, Style spoke with Gordon about her work with a newly formed national nonprofit, the Independent Promoter Alliance. Recently, we talked to her again about the current situation with live music, the new grants and the alliance.

Style Weekly: How are you feeling about where we are now?

Jessica Gordon: I feel more optimistic now than I have for the last year. We’re booking as many outdoor, socially distanced shows as we can for the spring and summer and potentially the fall at Brown’s Island, but also at Hampton Coliseum and in Fredericksburg at Dominion Raceway. For indoor shows, we are doing some small, fully seated, socially distanced shows now at the Camel and Richmond Music Hall. But in terms of general admission, we’re in agreement with everyone nationally that that’s going to happen most likely in the fall. … I think once we get the green light for normal shows, a lot of bands are immediately going to be ready to go out. But the agencies and promoters have rescheduled those shows three to five times at this point. Nobody wants to do that again right now.

Was the last change to the restrictions by Gov. Ralph Northam what you anticipated and do you expect more loosening?

Pretty much, that the 1,000-person cap would be removed and it would be 30% [capacity] for outdoor shows. That’s what he did, which was pleasantly received. My guess is that it will slowly go to 50 or 60%, sort of staggered [moving forward].

Sales have been really good for shows already announced. St. Paul and the Broken Bones sold out in two hours. … on a space like Brown’s Island, there isn’t a clear capacity. It’s like 15,000 people for Folk Festival or something with multiple stages. But for Friday Cheers, that area holds around 4,500. But it’s not just 30%, its 30% with social distancing – so for us, what that means is 30% with pods.

With the Shuttered Venue Operators Grants, those will be given out in order of how much revenue was lost by the applicant?

Yes. … So for us, Broadberry Entertainment, that’s our booking business. You compare your 2019 sales to your 2020 sales, starting in March when everything shut down. … The grants are based on gross receipts, including tickets and concessions, not profits. … Some businesses are working with their accountants, some are doing the best they can on their own [to apply]. ... Anything that’s Live Nation or AEG does not qualify, but like the Byrd Theatre or any outdoor space that does ticketed events would qualify. The booking agents we work with are also able to apply for this money. …

They’re saying the grants will be awarded pretty quickly, though they said that with the applications, too [which took months]. I think it’s going to take them a long time to go through all of the more murky situations – you know, is this a venue or what?

But if the grant money is gone before they get to us, it’s gone. That’s all anybody talks about anymore.

And they’ve changed the rules regarding the grants if you’ve gotten a Paycheck Protection Program loan? Now you can have both?

Yes, back when this passed, you could either apply for one or the other. Now four months later, the[shuttered venue applications] are finally going. A few weeks ago, Chuck Schumer, who’s been a big advocate for all the venues, went back and got the bill amended to say you could apply for PPP. So if you get PPP and you also get SVOG, they will just subtract the PPP amount from it. You still get one or the other. … But really these new SVO grants are the only substantial lifeline that anyone in this industry has been thrown.

Has much changed with the Independent Promoter Alliance?

Yeah, it’s grown a lot to over 600 members all over the country – from people who books small rooms to festivals. We do a number of virtual events each month and are making a big announcement this week [on April 14] that will represent a data-driven shift in our industry. We’ve created a platform for promoters to share box office reports for all their shows. Unlike every other industry, the music industry, at least from my end, has not been very data driven, much less than teaching even. So we’ve created this platform for members who can access these reports that will help inform our business practices so we can make educated guesses about how artists and concerts will perform.