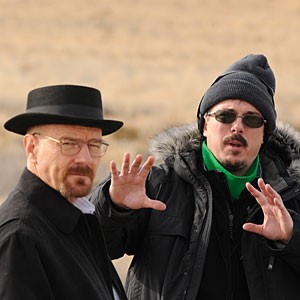 Methamphetamines, gun play and a Mexican drug cartel might not be what come to mind when most envision a family drama, but Vince Gilligan isn't like most people. He was a writer and producer for “The X-Files” and co-wrote Will Smith's “Hancock,” but the Richmond native is probably best known for his Emmy award-winning series “Breaking Bad.”

Gilligan's creation chronicles Walter White, a mild-mannered chemistry teacher who turns to cooking crystal meth after learning he has terminal cancer. Three seasons in, the AMC show has gained a rabid fan base and much critical praise, including three consecutive Emmy wins for star Bryan Cranston.

Reached at his office in Burbank, Calif., Gilligan is currently at work with a team of writers creating the show's next season. “I think what sets ‘Breaking Bad' apart is that our mandate from day one was that we take … a protagonist, a good guy, and we transform him through the life of the series into a bad guy. The whole show, fundamentally, is about change.”

Born at Medical College of Virginia, Gilligan moved to Farmville while still a toddler, but returned to the Richmond area as a teenager and attended L.C. Bird High School. In 1989 he won the Virginia Governor's Screenwriting Award for his screenplay “Home Fries,” which was later filmed with Drew Barrymore and Luke Wilson.

Before moving to Los Angeles, Gilligan penned another screenplay titled “Two-Face” (or “2-Face”) that has spent the last two decades in development hell. Will Ferrell has expressed interest in the script, but Gilligan doubts the movie will be filmed anytime soon.

Gilligan has referred to both Norfolk and Portsmouth on “Breaking Bad,” and the season three finale mentions a trailer park in Dillwyn as the hiding place of one of the main characters. As a kid, Gilligan and his father, both train buffs, used to ride an excursion locomotive in Dillwyn. “I thought ‘How often does Dillwyn get a shout out on national TV?' so I thought I'd be the one,” he says.

The launch of season four of the show has been pushed back to July of next year, which will air more than a full year after the season three finale and make the show ineligible for the 2011 Emmys. “It's for good reasons,” Gilligan says. “(AMC's) hope is that we can get more viewers with a summer launch than launching it in March or April.”

As far as what the fourth season will bring, Gilligan offers few clues. “As dark as things have gotten they're going to get a little darker still. … I always said ‘We're gonna take Mr. Chips and turn him into Scarface,' and Walt is not quite at Scarface level yet.”

Though the show talks about the production and sale of methamphetamine, Gilligan insists that his show is much more than a crime drama. “For me, ‘Breaking Bad' is not really about drugs. … It's more of a character study, the story of a man now in the midst of a transformation, a man who up until the age of 50 was living a life of quiet desperation. … It's ultimately the story of one man and his family.”

Gilligan says he returns to Richmond twice a year, and that his long-term girlfriend owns a house in the Fan. “I miss it. It's a great city, and it's my hometown,” he says. “I really do wish I could get back more often because it's a wonderful place, and I really wish I could shoot something there.”

For information on “Breaking Bad,” go to AMCTV.com.