It is a place of children. Hungry, but impelled by youthful energy. Their dreams and worries like wet frescoes, immovable in spite of the chaos, but alive with emotion and contrast. 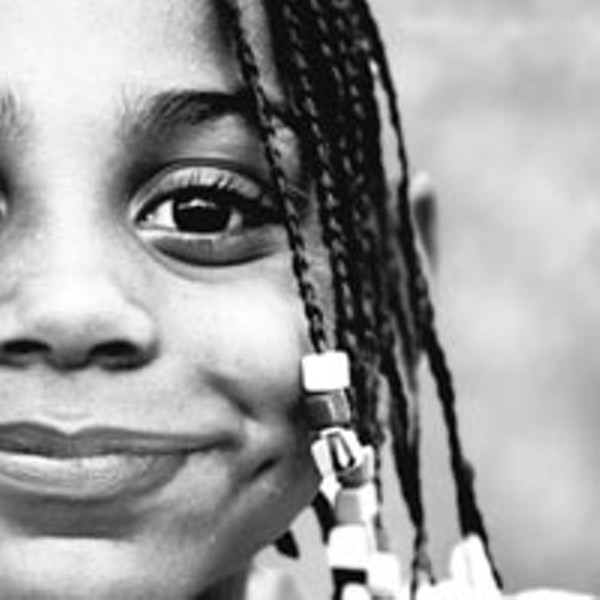 This is a place of nearly undeniable squalor. A place that strains minute by desperate minute against the hopelessness that seeps in through broken windows, cracked walls and sole-less shoes. A place of Sisyphean struggle.

And yet, through it all, it is a place of children. Hungry, but impelled by youthful energy. Their dreams and worries like wet frescoes, immovable in spite of the chaos, but alive with emotion and contrast.

Every so often — not nearly as often as I would like — I venture up the hill to eat lunch in the school cafeteria with a little girl I'll call Shelly. She's halfway through the fourth grade, quixotic, outspoken, occasionally querulous and always ebullient at the sight of her lunch buddy. She's surely as needy as the rest, as exposed to the realities of the projects as her many siblings, or her rasorial mom, or her absentee dad, or her impossibly young grandmother. In the two years that we have dined together, she seems to have grown 10, a little person too soon become big.

We do not often talk about important things. Mostly, we critique the cafeteria food, play silly games with Fruit Roll-Ups, and compete to see who can drink their chocolate milk the fastest. Sometimes we go to the library after lunch so that she can read to me. So ponderous, but urgent with the need to sound out each word, to make some sense of the story line, as if it were all foreign to her. Lately, she's delighted in hearing about my own little girl's belabored efforts to speak, to sound out simple words like moon and mommy, as if these girls were confidantes in a confused world of vowels and silent letters.

Recently I asked Shelly if she'd ever been on a trip, ever ventured to a faraway place. She looked at me as if I had asked a nonsensical question. And I realized that I had, so I quickly rephrased it.

"Shelly, if you could take a trip anywhere in the world, where would you go?"

She furrowed her little brow and then said, more unequivocally than I could have imagined, "South America."

"But why there?" I thought and then asked aloud.

She looked sheepish for a minute, and then explained. "There's a little girl that comes on TV sometimes. Her name is Jenny, and she's very, very poor. She doesn't have a family, or a home, or food. I asked my mom if we could adopt her, so that she could come live with us. My mom said that would be OK, but only if we could find a way to go down to South America to get her. So that's where I want to go."

This little creature, herself denied the comforts that we off-the-hill dwellers take for granted, betwixt the dirty and the poor, and exposed to hopelessness at every turn, still she clings to hope. And not for herself, not for her own survival or satisfaction, but for a little creature even less fortunate than she, remote but bonded by irreducible reality.

I was stunned, nearly fell off my chair, nearly burst into tears. I felt like the Grinch when he heard the Whos down in Whoville singing their sweet song in spite of their loss, felt like the weight of a100-pound iron had been lifted from my chest, felt like I could sit there forever listening to this little creature beside me, her voice now sweet with crimson rays and song birds and peppermint clouds.

There is a place where the sidewalk ends, and it is not too far from here. Few follow the path there, and even fewer follow it out. It is a place of overwhelming need, nearly unfixable, almost forgotten. But it also is a place of children, and hope, and from time to time, impossible beauty. Lunch is served promptly at 12:20, so don't be late or you might miss it.

Yes we'll walk with a walk that is measured and slow,

And we'll go where the chalk-white arrows go,

The place where the sidewalk ends. — Shel Silverstein S